This week, Ohio State faces a Purdue coach that’s undefeated* against them, and seeks to rebound from a horrible defensive showing at Indiana.  So, yeah- our soundtrack is something that should be harped on, even if it seems a little paranoid. 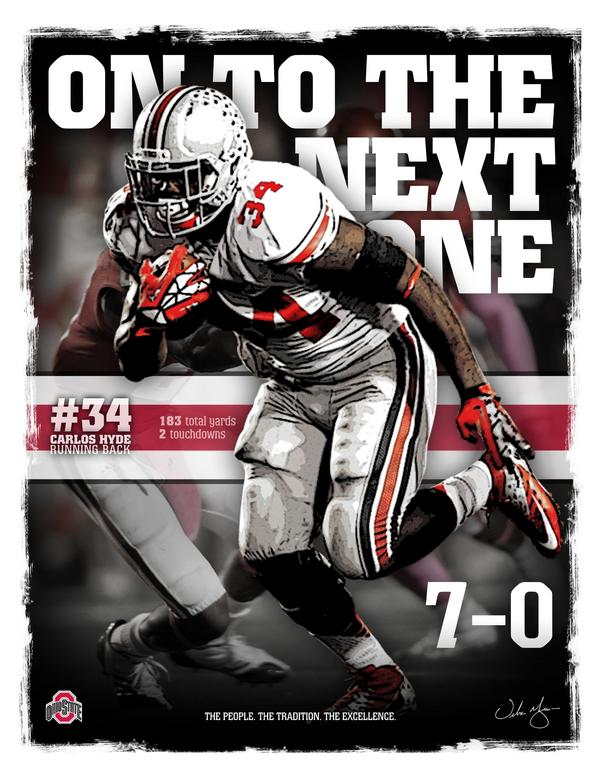 Ok, this one is probably going to get me into some hot water.  Critiquing the very fabric of the “Student Athlete” mythos seems to float past most of our loyal readers (Hi, Mom!), as does my questioning whether the Buckeyes (And Longhorns, Lions, Crimson Tide, Trojans, etc.) have nothing to do with the educational endeavors at their various institutions. But this time, we’re stepping on toes for sure.

Yup, when I see fliers for “Pink Out Purdue”, or watch Monday night football and catch all the pastel colors, I can’t help but ask myself- What difference does it make?

I know that the NFL and other organizations are doing great work raising money for cancer research and treatment, although I seriously wonder who’s interested in a game worn pink sweatband from a third string offensive lineman. And, as someone whose life has been impacted by cancer with numerous loved ones, I’m not saying that it’s not an important issue.

I just can’t for the life of me figure out if there’s not a better way to go about things.  Raising funds is amazing- it’s one of the several reasons that Eat Too Brutus is a great event. But the idea that someone will walk away from a game wanting to seek more information about any issue- becoming more aware, if you will- seems to be missing the boat.

This is particularly true for the cause most associated with October- breast cancer awareness.  Prostate cancer has been linked to similar genetic predispositions and unfortunately has a similar fatality rate, with much less publicity. This isn’t a “well, what about us?” question from a male seeking equal time, just a larger question: If “Awareness” is our goal, wouldn’t it be more important to gear our focus on something that’s lesser known?

But, you see, my issue isn’t with the cause, it’s with the goal.  Look at it this way- Currently, the Ohio State defense seems to have a problem.  If Coach Meyer or Coach Fickell merely said, “Yup, we’re aware of what’s wrong…”, we’d be less than chipper about that response.  We want action- and action that’s real and tangible (more raw meat for Simon, for instance) rather than symbolic.

Bumper stickers are great, ribbons on our lapel or helmets are fantastic, pushing “like” on facebook or passing on the Kony2012 video is a good start, but are often more about us feeling good about doing “something” rather than actually making significant changes in our lives. Slacktivism is rampant, and will probably impact our November 6th decisions as well- we’ll pull a lever, but won’t leave the voting booth any more committed to making a direct impact in our communities about things we feel passionate about. We did something important, but that’s only the first step.

So, if you’re headed to the game this Saturday, by all means wear pink and support the cause. There’s amazing work being done with your donated dollars.  But also ask if there’s something more that you can do- is there a way that you can, in the words of a great man “Pay It Forward”.  That’s what makes a difference that lasts far past the time that the shirt is somewhere on the bottom of the laundry bag.  And, it’s what it means to be “Buckeye Nation”- making an impact wherever you find yourself.

Ok, back to the sports and stuff.

Here- Here’s a cute picture of a cat doing funny things. Are we friends again?