As a part of the 2012 season, the Buckeye Bloggers Network is pooling their expertise to give Ohio State fans the most in-depth coverage possible for Saturday’s game.

This week tBBC looks at the special teams matchup with the Miami University RedHawks . Be sure to check out the rest of this series via the links at the bottom of this post!

As the Buckeyes look to start the Urban Meyer era, there will be many changes that fans will experience.

However, the emphasis on solid special teams, a hallmark of the previous administration, will continue under the new regime… and perhaps even be more of a point of pride.

Like the Vest, Coach Meyer has called the punt the most important play in the game. Indeed, the fact that he has taken charge of the Special Forces’ planning and preparation highlights that the man is serious about the kicking game. While at Florida, this was certainly evident- the Gators prided themselves on their ability to aggressively get after the punt and the fact that their return teams were almost expected to score every time the ball was on it’s way.

Instead of being another time to gather a fresh beverage, Buckeye fans will need to stay glued to their seats during the specialists’ time on the stage.

But before we look at what the 2012 version of the OSU Special Forces will be, let’s take a gander at the visitors from Oxford. The RedHawks return a good portion of their specialists from 2011, including punter Zac Murphy and kicker Mason Krysinski.

Murphy, a former walk on who earned third team MAC honors as a freshman, averages 39.1 yards per punt in each of his first two seasons, as well as having a long of 66 yards to his name.  He was also responsible for dropping 13 punts inside the 20 last year, but had two kicks blocked in the 2011 campaign.

Krysinski, a 3.98 GPA student, struggled a bit in 2011. To go with his season long 45 yard FG against Bowling Green, he averages 56 yards a kickoff with only one touchback. It will be interesting to see if his numbers improve with the change in NCAA guidelines regarding kicks this season… and no better time to experiment than the first game of the season. He was 2-6 in field goals, and missed four extra points in 2011.

At this point, return specialists have not yet been identified, although the Miami media guide indicates that 50% of the punt return yards and 98% of the kick return yards return for the 2012 campaign.  My guess is that, barring a new face deep to receive (Freddie McRae?), we might see defensive back Dayonne Nunley or receiver Dawan Scott awaiting kicks.

The RedHawks coverage team excelled at times last year, holding punt returns to a 7 yard average and kickoff returns to just over 14 yards per attempt. They allowed one punt return for a TD, and scored none themselves.

Ok. Now to the good guys.

We’ve seen the “Special Forces” wall at the WHAC during the All Access events, but Monday gave us some of the best insights into what this will look like once the team hits the field. 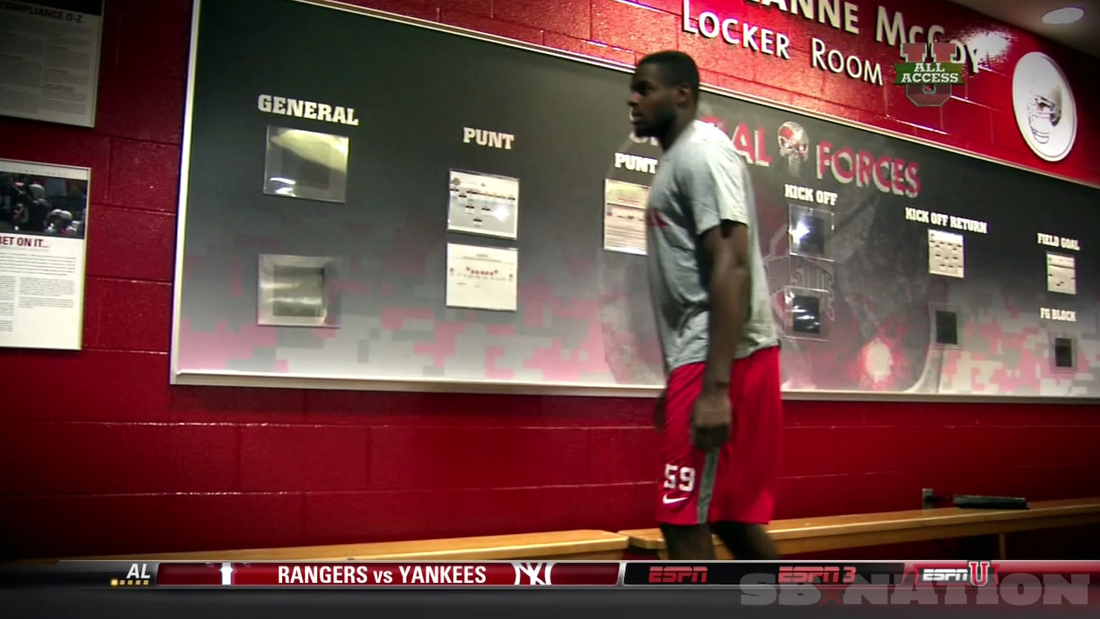 During player interviews, Philly Brown mentioned that he has earned a spot on the punt block team, and that the team has taken to calling this “The Freak Show” due to the large number of athletes they’ve got on the squad. A big play here would certainly set the tone for the rest of the season, even if it only makes opponents spend more time planning their blocking coverage.

The depth chart also revealed that Philly will be returning kicks and punts, and will be backed up by Bri’onte on kickoffs and Devin Smith during punts. There’s speculation that the team likes Bri’onte’s speed and his blocking ability- certainly something to keep an eye on in those moments right before “the wedge” gets blown up on a big runback.

The biggest surprise of the special teams is also the one that makes yours truly the giddiest… we’ve got longsnapper news! Redshirt freshman Bryce Haynes, the first longsnapper to be recruited for scholarship purposes at Ohio State has beaten out incumbent George Makridis for the job… which isn’t surprising, given that we’d heard Haynes’ skill was actually improving the timing of punts by .2 seconds during fall camp. That’s even less of a chance that we’ll see a block and means a faster release for the downfield attackers.

Although, I’ll be perfectly satisfied if the punt team never takes the field on Saturday.

Be sure to check out the rest of the BBN for more on Saturday’s key matchups.