Now that the rain has subsided, maybe the Buckeye State can enjoy the summer sunshine and higher temperatures… or as we call it in Los Angeles, “Wednesday”. Today’s soundtrack hearkens back to the halcyon days of the 80’s, before I had to actually pay for air conditioning. Back then, I thought that a Power Station meant something completely different… 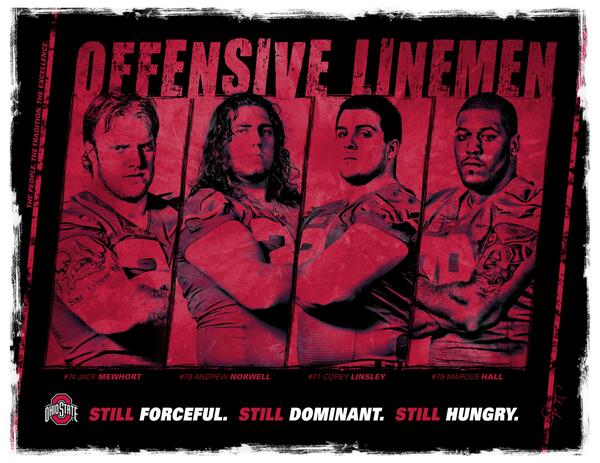 One of the most disturbing stories this week is one that continues to highlight the changing face of football.

Both the NFL and the NCAA have highlighted concerns regarding player safety; concussion studies nationally (including work done by Ohio State and Nebraska) are continuing to point out the damage that the game can have on those who participate. Knowing what we’re becoming aware of, it would be unwise NOT to work to minimize the lifelong impact on players. This is particularly true at the high school and college level- we’ve talked before about the idea of health management and the NCAA.

The recent rule change highlighting “targeting” defenseless players come from these concerns. For a quick overview, Charles covered the NCAA changes while an earlier SBP talked about this as a part of the larger debate regarding the future of college football. Thank You For Your Stupidity

This week, then, the B1G began to outline what this might look like as they are instructing officials in preparation for the season. The overview, while simplistic, seems to be “when in doubt, throw them out” (eject players). Here’s a conversation with the conference’s officials coordinator that outlines the new expectation.

The backlash was, well, predictable. As someone who played and coached football in addition to having my butt planted in front of the TV on Saturdays and Sundays, I echo the sentiment that these rules will be hard to manage, will have a greater impact than should be expected, and are part of a gradual change to college football becoming glorified 7-v-7 competitions played two hand touch or with flags. However, as I said in the article linked earlier- I understand the concern and realize that something needs to be done in this area.

Ramzy takes a more in depth look at the in-game problems the B1G’s rules will create– judgment calls, in the moment, on plays that move faster than most can fathom, made by people who may have questionable abilities in the first place. And who gets tossed when a legal form tackle becomes head to head after the runner lowers his helmet into the hole?

While I find those issues concerning, I’m also worried about the national inconsistency that’s going to exist in this area. Look, I’m a believer that the B1G should be a Leader in college athletics, but am worried that this emphasis, with the “when in doubt, throw them out” mantra, will effectively mean that the conference will be playing by different rules than the rest of the country.

For example- This was flagged by B1G officials in last year’s conference championship game, in spite of the fact that the hit in question occurred as part of the play in process:

This was not flagged by SEC officials in last year’s conference championship game, in spite of the fact that the hit in question occurred away from the play in process:

I’m sure you can imagine the impact (as it were) that this inconsistency might have- key players from one conference missing meaningful game time, to the point where games themselves might see their results changed, while other teams don’t suffer the same fate. Imagine if “holding” meant something different depending on who was playing… whoops, bad example, huh Wisconsin fans?

Given the current state of college football, the possibility of a one loss team making a playoff or a major bowl game is a reality; but what it there’s a two loss team who dropped a game where a player was controversially ejected at a key moment?

Another area where this might be an issue is during the postseason. Given that conferences provide officials for games not involving their programs, will a bowl game have issues where teams have to adjust to new interpretations or implementations of common rules? Arguably, we saw some of this during March Madness this past year- the B1G allowed for much more physical play during conference matchups, and in the Tournament many of the top programs saw early exists due in part to foul trouble.

We’ll continue to monitor this as the season progresses- I imagine that this will easily fit into Monday’s The Week That Were reviews. In the meantime, unless the B1G moves toward pressuring other conferences to work toward similar standards, it seems like a mistake to make such a potentially drastic move as sudden as it’s being implemented.