Super teams will not always be successful in terms of rings, but they most certainly would attract a crowd. For some teams, all they ever got was the crowd and no rings. It’s certainly fair to say that not all superteams are successful. 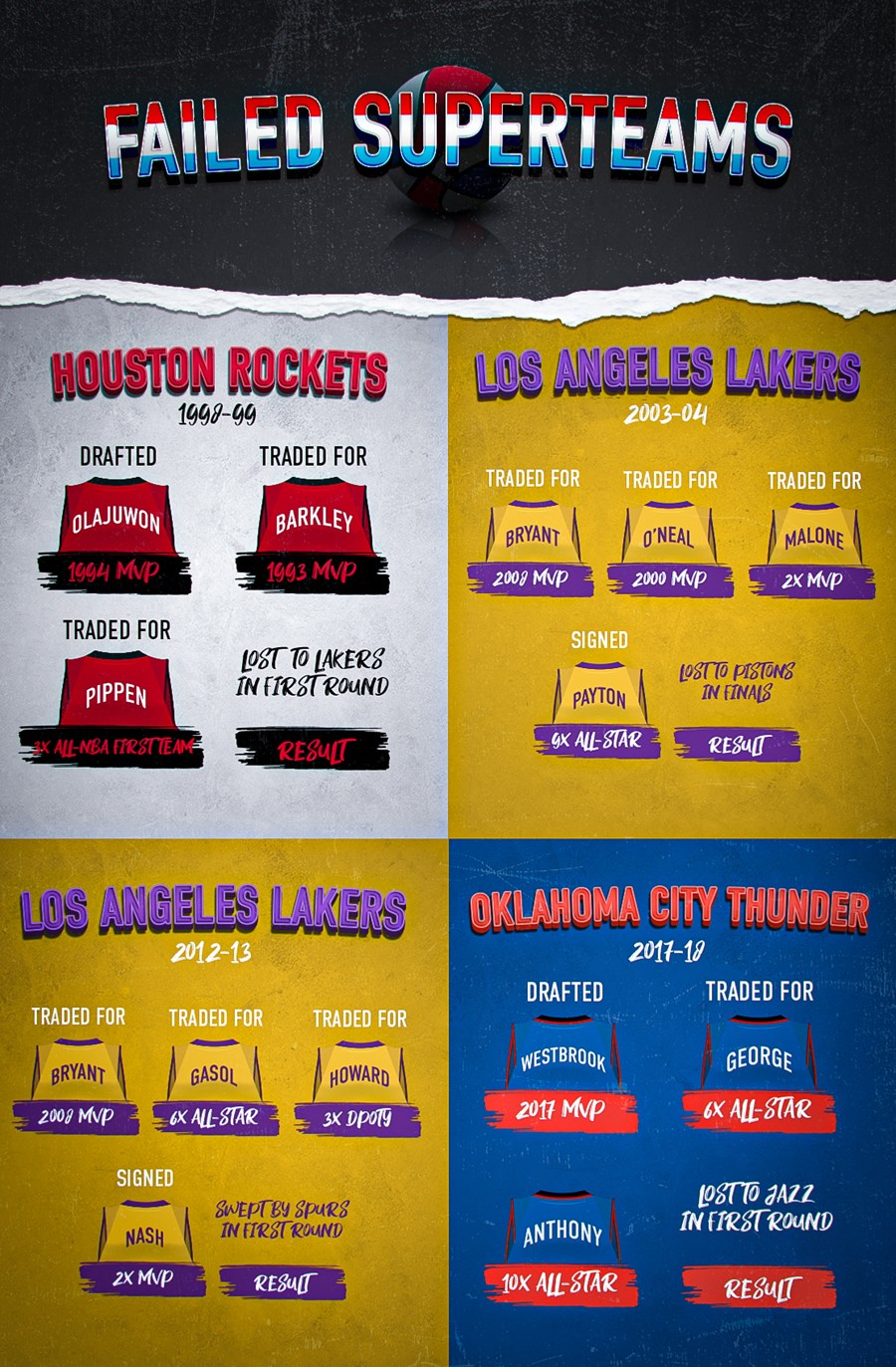 The Rockets had tasted championship glory in the most exquisite fashion, back-to-back, led by Hakeem Olajuwon. All good things do, however, come to an end and “The Dream” was nearing his end in Houston and the NBA stage. The Rockets were hoping they could squeeze a few more out of him, so they hawked Pippen from the Bulls and believed in the hunger of Charles Barkley. However, this was a Pippen who was fresh off multiple postseason runs with the Bulls, and felt he had nothing much to prove, he had more rings than a hand to take. Barkley wanted a title but he was not exactly the force he once was in his prime, and it showed on the court when it mattered most. The Rockets did make the playoffs, but their tiring legs were no match for the dynamic duo of Kobe and Shaq. A quick first-round exit would all but convince the team to abandon any hopes of a super team, and Pippen would be traded to Portland.

Without their on-court issues, who knows what could have come out of that Kobe and Shaq tandem. Both men were a super team by themselves, but their big personalities were too abrasive on each other and something had to give. Before it did, The Lakers Tried to get one more ring from them and decided more defense and scoring would be the perfect recipe to dull the tensions. Gary “The Glove” Payton and Karl Malone were added to the roster and the Lakers suddenly had more stars than they knew what to do with. However, for all their stars, the Lakers were struck by the Loki of the sports world, injuries. The team would manage to reach the postseason and make the finals as expected but not put up much of a fight against the Pistons. That off-season, Shaquille O’Neal will move on to the Miami Heat and Kobe would become the undisputed number one on the Lakers team for years to come.

Kobe was more of a “lead by example” leader who believed his drive and obsession for perfection were the way to win. Many other stars existed in the NBA but not all of them had the obsession and work ethic of Bryant. So, when one such superstar joined the Lakers in the person of Dwight Howard, there was bound to be trouble. Steve Nash was added to the mix for balance but he was not the kind to be a vocal presence, so when Kobe went down with an Achilles injury against the Warriors, there was a feeling the Lakers’ season was over and rightly so.

With Durant gone, the Thunder were left with Westbrook and a decent team, but him leaving in free agency meant they got back nothing in return for him. Despite Westbrook’s best efforts, which meant a triple-double almost every other night, the Thunder still could bring themselves to the lofty standards and heights previously reached. In the off-season of 2017, the team would bring in Paul George and Carmelo Anthony and all would look auspicious again in OKC, but only to be short-lived by the Utah Jazz and rookie sensation, Donovan Mitchell. The Thunder would never recover, and a Damian Lillard dagger shot in 2018 would definitely put the team and any hopes of not rebuilding, out of question.