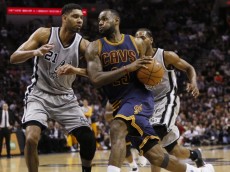 Last night could have been a 2016 NBA Finals preview as the San Antonio Spurs and Cleveland Cavaliers met in a game that went down to the final quarter. And although the Spurs won a close one against the East leaders, after the game, LeBron James took to his Instagram to basically show his respect, […]