Charlotte is everything a wrestling federation could want in a marquee performer. She’s athletic, parlaying her experience as a college volleyball player and former fitness trainer into tremendous ring work. She’s got a great look: tall, blonde and in peak physical condition. She exudes charisma just as much through her facial expressions and mannerisms as through the microphone. And, as the daughter of one of the most famous and influential wrestlers of all-time, Ric Flair, she has the pedigree.

Put it all together, and Charlotte has the capacity to be not just the face of WWE women’s division, but one of the premier stars in all of professional wrestling.

Charlotte had a run of outstanding matches throughout 2014, stealing the show on NXT TakeOver shows against both Bayley and Sasha Banks.

That momentum carried over into 2015 and what is still one of the my favorite matches thus far into the year: Charlotte vs. Sasha Banks vs. Becky Lynch vs. Bayley from February’s TakeOver: Rival.

With each match, Charlotte’s wrestling becomes more refined. Her already-fluid movements are becoming more crisp and her moveset more innovative. On the April 22 installment of NXT, Charlotte used a Figure 4 headlock on Bayley that was both a nod to her dad and arguably the highlight of the three-way dance with Bayley and Becky Lynch.

Charlotte’s developing the complete package, too, adding subtleties to her game that give her matches a special feel. Her reaction after teaming with Bayley with execute a version of the Doomsday Device on Becky Lynch is an example.

Women’s wrestling is on the precipice of a boom that could fuel the entire industry. A.J. Lee might be gone (shocker) but the #GiveDivasAChance movement she named is gaining steam, and Charlotte is the perfect wrestler around whom to build.

Indeed, the upcoming women’s revolution was evident in the biggest show of the year. In a WrestleMania that was among WWE’s greatest in 31 years of holding the annual spectacle, nothing generated as much buzz as Ronda Rousey’s appearance and interaction with Stephanie McMahon. A Rousey-McMahon match at WrestleMania XXXII is already one of the most hotly speculated possibilities for next spring’s mega-card.

Of course, Rousey is a UFC fighter and McMahon — while a full-time character — wrestles only sporadically. A Rousey-McMahon match is the ideal opportunity to give someone a main-event caliber rub.

Charlotte could not be more ideal for this rub. Rousey’s crew is dubbed the Four Horsewomen in honor of the legendary stable that Charlotte’s dad headed. Who better to train the MMA fighter Rousey for a wrestling match than the offspring of the original Horseman? 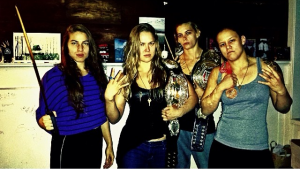 While involvement in a still-hypothetical Ronda Rousey-Stephanie McMahon match is the dream scenario to push Charlotte’s fast-rising star, she has the qualities necessary to be a big-time star regardless.