When this site only covered the ACC we had a feature called the Baller’s Almanac, which was a ‘this day in history’ which focused solely on ACC history, coaches, players, their accomplishments (and their occasional legal troubles). Then Run the Floor made the leap to a general college basketball blog and it no longer felt appropriate to cover one conference’s history. And so the feature was put to bed. But after several weeks of not running it I began to miss it. Even if you don’t read it, writing it is the best way for me to learn more about the history of the greatest sport on earth. So I dusted off the database and began the tedious task of updating it for over 300 schools. That is a work in progress, and hopefully always will be. But for now, without any further yammering from my end, here’s your Baller’s Almanac for January 1st, 2012.

It was on this day in 2007 that Bobby Knight became the all-time winningnest Division I head coach. His Texas Tech Red Raiders blew a 20 point lead to New Mexico that night, but battled back and withstood an errant three that would have won the game for the Lobos. After the game and outpouring of accolades came from around the basketball world – from ex-players, coaches, and rivals. By that point his legacy had already been tarnished by the way the end came at Indiana, and so there was plenty of hand wringing and typical ESPN-level discussion about what his legacy meant. Regardless, he only coached for one more season and finished his career with 902 wins.

On the night of 880, the Texas Tech website speculated on the chances of anyone catching Knight:

Arizona’s Lute Olson is second among active coaches with 772 wins. But at 72, and also under contract through 2011, he is not likely to make up enough ground. 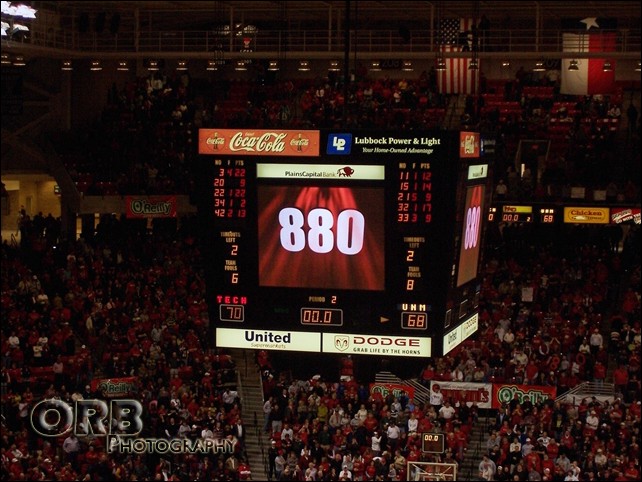 Bones McKinney was born on this date in 1919, in Lowlands, North Carolina. Over 90 years later, fans of North Carolina basketball still don’t know which school can claim him. He wanted to play for Duke but got in trouble for sneaking into Duke games and instead ended up in Raleigh. He played for both North Carolina State and the University of North Carolina, and then following an NBA career he coached Wake Forest for 14 seasons, leading them to two ACC Titles and a Final Four. His sideline antics finally did him in at Wake, a conservative school which at that time was hotly debating whether dancing should be allowed on campus. Bones’ theatrics included strapping himself to a chair with a seatbelt when he felt that a technical foul was imminent; and another time he left the bench after becoming frustrated with his players. Instead, he went up into the stands and cheered with the fans.

It’s Ronald Glen “Big Baby” Davis’s 26th birthday, born in Baton Rouge, Louisiana. When he was 15 Davis attended a Shaquille O’Neal basketball camp and ended up wresting with the NBA star. After body slamming Shaq, O’Neal recommended to then LSU head coach Dale Brown to recruit Davis. Glen Davis would go on to become the SEC Player of the Year as a sophomore (1996) and lead the Tigers to their first Final Four in a decade. He played one more season and then declared for the NBA.

On this day in 2010, Javaris Crittenton and Gilbert Arenas were charged with brandishing handguns during an argument in the team locker room. The two played for the Washington Wizards (who had changed the team name from the Bullets), and it was alleged that Arenas drew his gun first and Crittenton followed suit. The two were arguing over a gambling debt. Both players were suspended for the rest of the season. Gilbert Arenas (University of Arizona) is currently a free agent, while Crittenton (Georgia Tech) is awaiting trial for his alleged involvement in the August, 2011 murder of a 22-year-old Atlanta woman (Jullian Jones).