Colorado State and Virginia Tech are both good teams, but they aren't exactly programs that the casual fan chases on a Sunday. Compounding the issue was the start time: this game didn't even tip until 11:30 EST, and it was competing against undefeated Arizona vs Miami, so it's safe to say that not many people watched it. But what happened on the court should be watched by a lot of people. It was a clinic. It was surgical. It was like watching someone who is very skilled at some obscure thing (fixing watches?) do their work.

Colorado won 88-52. This was a 63 possession game, meaning that the Rams averaged 1.40 points with every possession. To put that into context, teams from the seven "major" conferences (Big Ten, Big East, ACC, SEC, Big 12, Pac 12, Mountain West) have played approximately 935 games this season combined, and out of those games only twice have defenses from the big 7 conferences have been scored on like Virginia Tech was last night. And those two games featured Boston College and Penn State who both are horrible. But Virginia Tech is a good team. Their defense was ranked in the top 100 entering their matchup with the Rams.

So what happened? First, it was a battle of tempo. The Rams want every game to be a grinding battle of two teams trying to score on each other in half court sets. That's their strength. Virginia Tech, who plays much better when they can avoid 5-on-5 half court sets, wanted to run. But CSU controlled the tempo by a) making tons of shots, and b) grabbing offensive boards on half the shots they did miss.

In that half court game, Colorado State dominated. The beauty of it was the execution. All college offenses are amalgams of what came before them, and each coaches system picks and chooses that parts he wants. But Larry Eustachy's game plan against the Hokies harkened back to the birth of modern basketball. Little happened in that offense that Phog Allen didn't cover in his 1937 classic Better Basketball.

The Rams offense isn't one that is going to wow anyone looking for a bunch of dunks and plays above the rim. Rather, it appeals to chess players, to military strategists. It's geometry. It's execution. It's one of those rare games that isn't going to be deleted from my DVR.

Here are a few examples.

The first play is an inbounds play to 6-10 senior Colton Iverson. He's the key to this offense. To be effective, there absolutely has to be a big man that demands double teams. And here Virginia Tech has three players (circled) near Iverson and he's 15' from the basket. From here, it's a simple math problem. Remove the inbounder, because he's buried in the corner, but CSU still has three other players, and the Hokies have just two defenders near any of them. So it's a 3-on-2 drill, and they have half the court to work with. 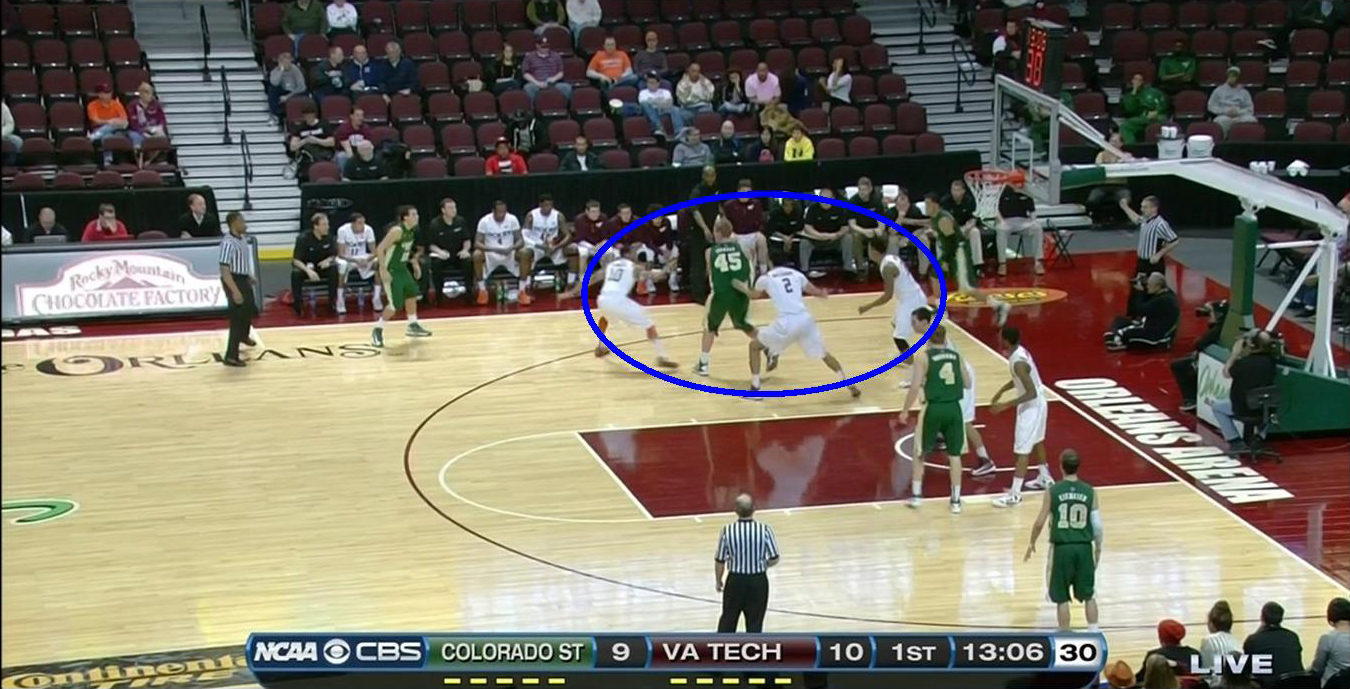 Iverson kicks the ball out to senior Dorian Green, who immediately drives the middle. He bodies the defender, keeping his right side free, leaving just two defenders (circled) to defend a) the ball, b) the post, and c) the three. Tech's two defenders cut off a and c. 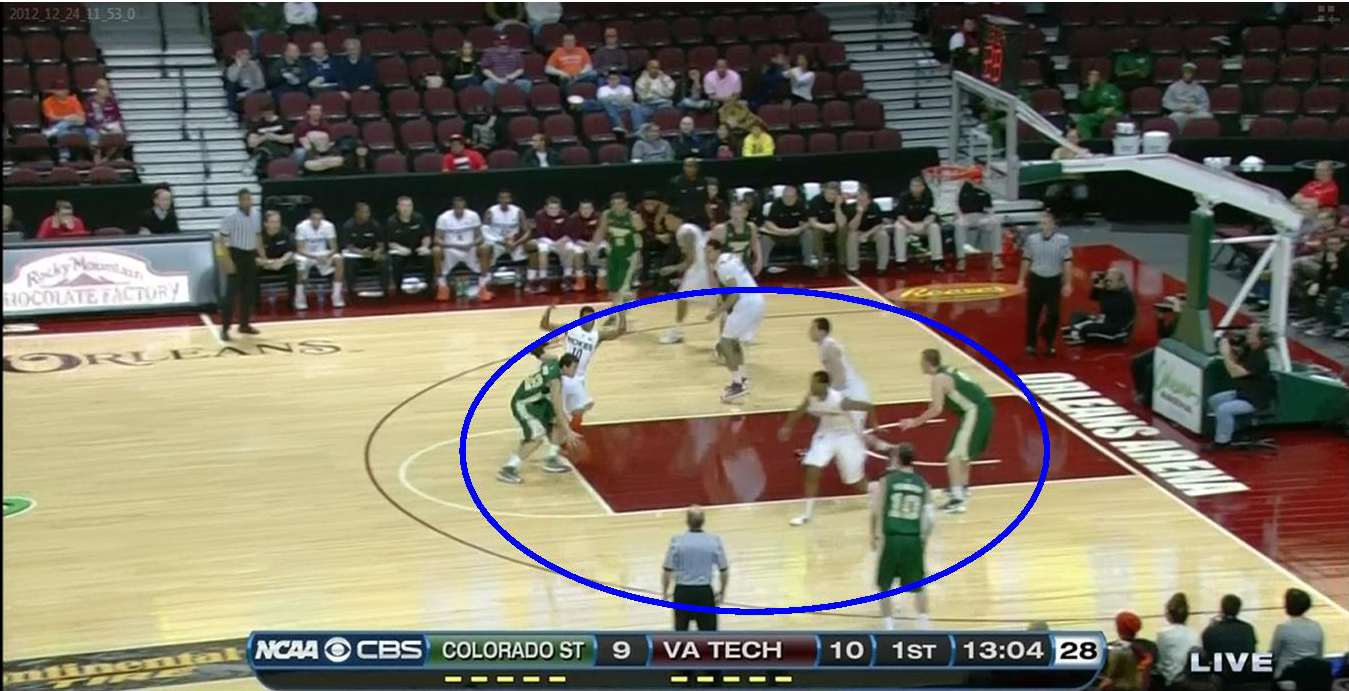 The next play is a quick transition dump down to senior Pierce Hornung. Assuming Virginia Tech isn't going to surrender the layup to Hornung (they don't), this leaves two defenders on three players (circled). And since one of those players is being screened, Hornung has two options here for easy buckets. 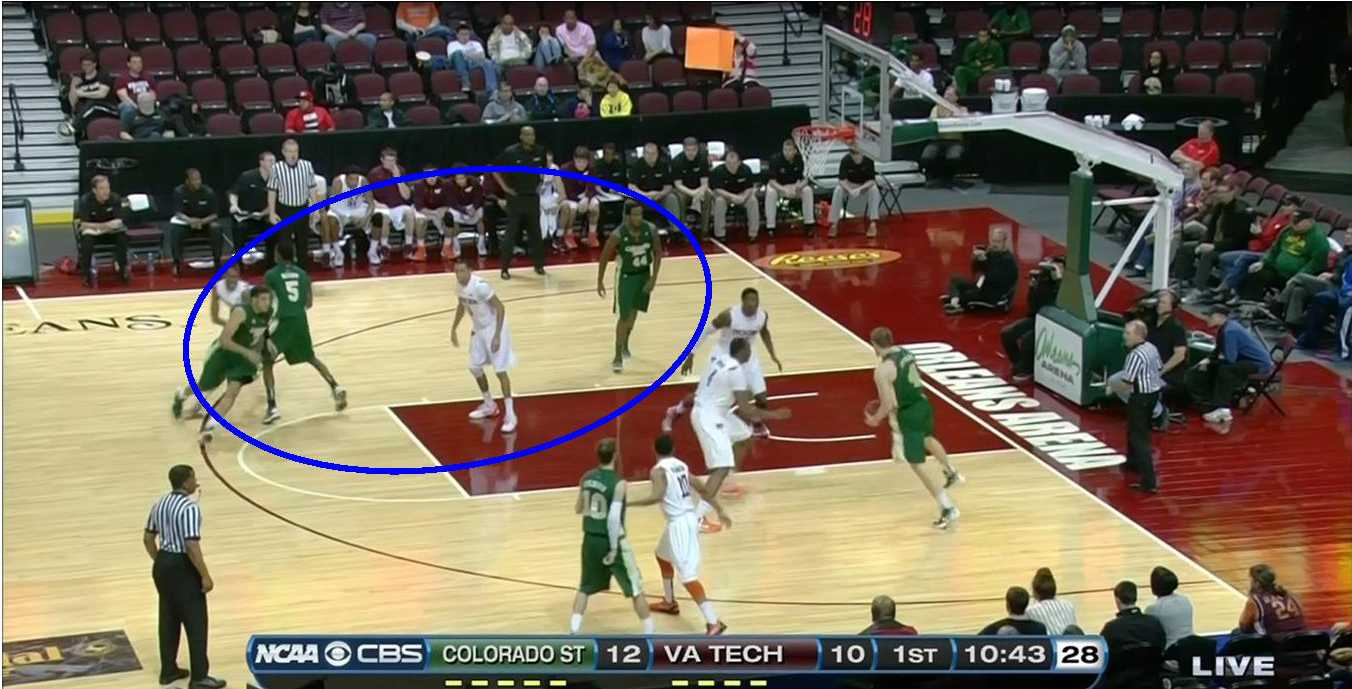 For Virginia Tech to be able to defend this, the ball should never have gone in to Hornung in the first place. They needed to pick him up in transition rather than letting him run a little slip screen to get free. The video:

The final play is my favorite, because it takes a bit to generate the proper geometry. It's another dump down to Colton Iverson, only this time Tech threatens a double (circled) but then retreats. 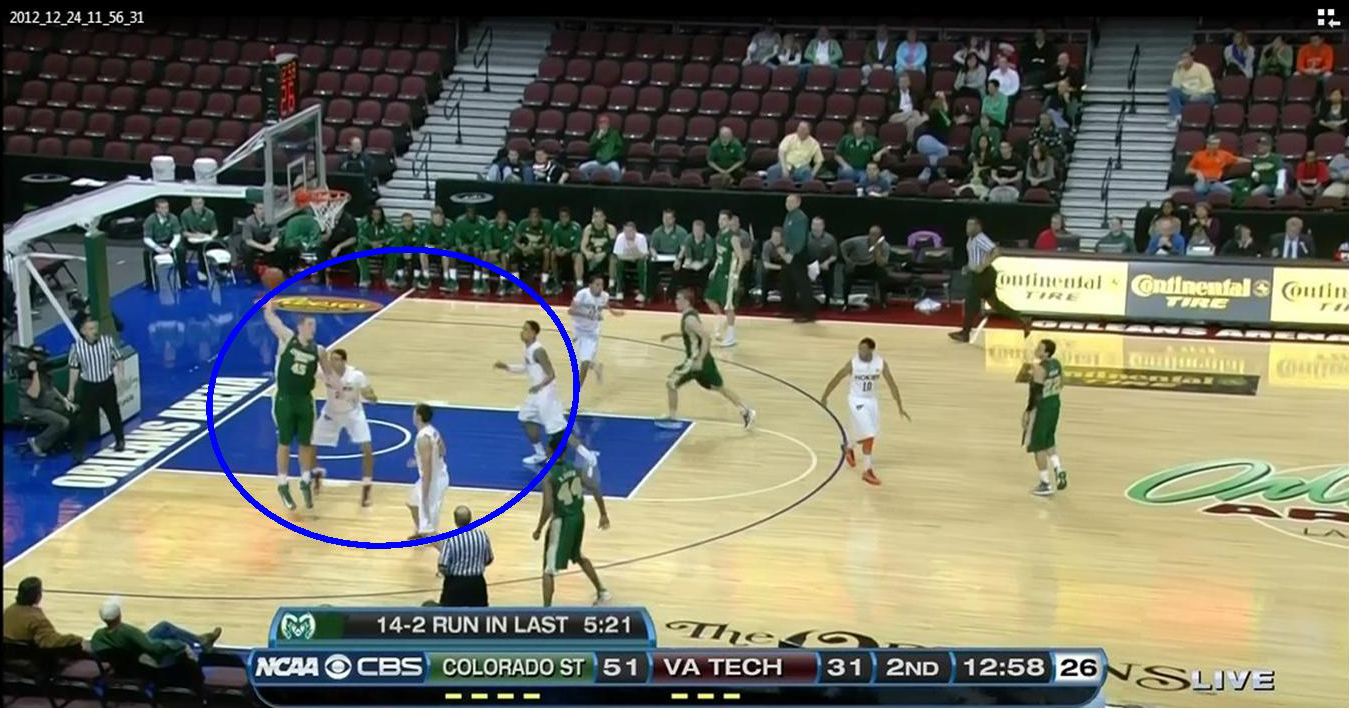 But Pierce Hornung is able to use the oldest fried in basketball – the baseline – to slip in and force the help defense to react. VT sags (circled) in to a 5-on-4 situation, and now the offense can operate. It's a simple kick out for the three. 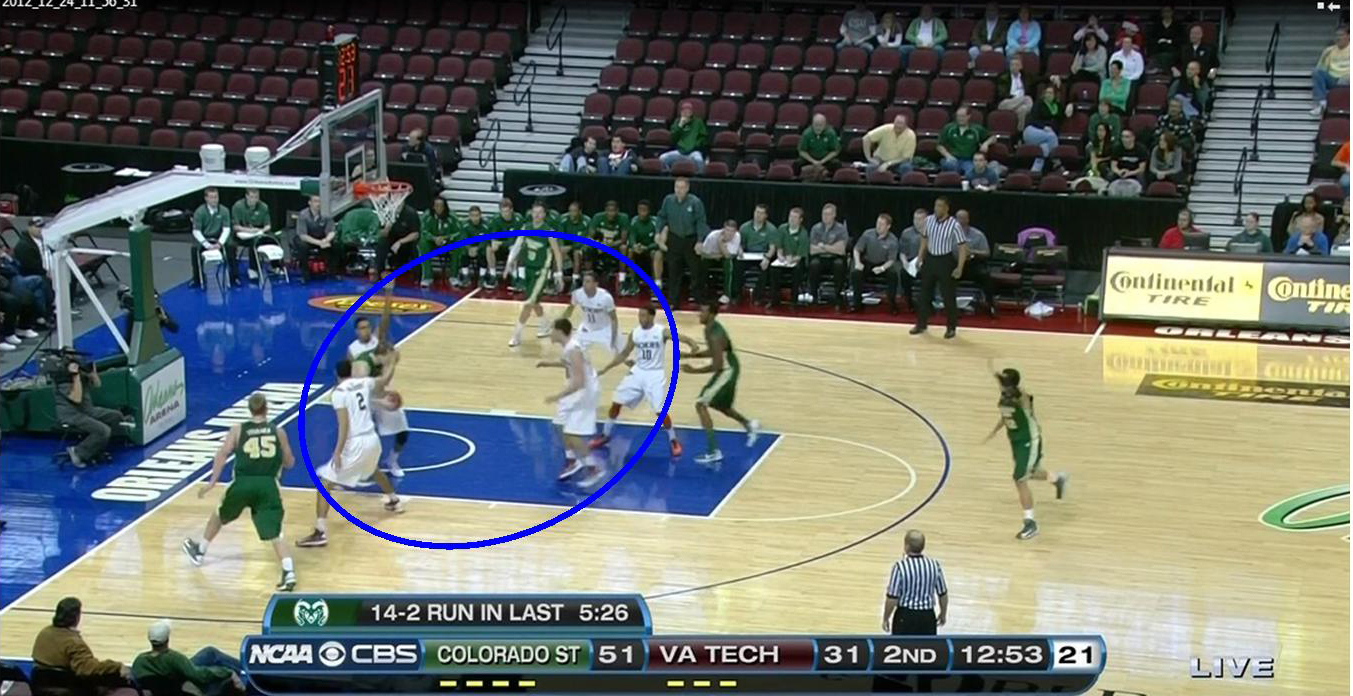 But the best part of this play is what Hornung does after he makes the kick. His momentum is carrying him toward the shooter, and even though Tech would never have been able to close out in time, Hornung has the right instinct to execute everything properly. He lets his momentum carry him to the elbow where he lays a brush screen (circled) on the defender so that the shooter has all day.