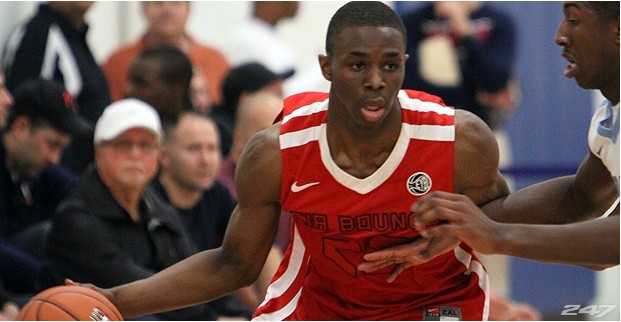 So what would it mean to land the player considered the best high school player (depending on which hype you're buying) since either the Durant/Oden class or LeBron James?

Kentucky: John Calipari is on a roll the likes of which have been unseen since the days of John Wooden. He's already landed three of ESPN's top-5 players in the class, and still has room to take several more players, dependent on how many of last season's No. 1 class jump early to the NBA. Go to Kentucky – play a season or two – become a lottery pick. That's the model. And it's working.

Based on that recent success it's tough to see Calipari losing out on anyone he really wants. And obviously he wants Wiggins. The Kentucky staff has been all over him for at least two years. If he doesn't land him, he'll simply move on and get someone else. But that someone else won't be anything like Wiggins. If Wiggins fills out his tremendous potential, then he's a player you want linked to your program. Missing out on him would be a small, but significant, dent in Calipari's armor. The columnists say that he doesn't miss on guys he really wants. Missing on Wiggins would end that hyperbole (for at least a week).

Landing Wiggins would further Coach Calipari's recruiting reputation. But let's be honest – people expect him to get a commitment from Wiggins. The story is more about missing out than getting him.

Florida State: Really? This is Kentucky's main competition? Don't take this the wrong way – FSU has made a huge leap under Coach Hamilton, and based on recent recruiting success (two more consensus top-100 players already in this class) he's not slowing down with age. But Florida State?

Their facilities are sub-par. It's known nationally as a football school (to which basketball fans ask where all the ACC Championships are as the Noles put one in the rafters for hoops). They have a big athletic budget, but it overwhelmingly goes to support the football program. And they haven't landed a consensus top-10 player in 20 years.

The reason they're in this at all is that Andrew's parents both starred at Florida State. That got the door open. But the real draw is Coach Hamilton and his staff. They have a sterling reputation with NBA scouts, and Hamilton demands something that many coaches don't – fundamental, tough, defense. If you don't play defense you sit on the bench. A year in that system might be the most beneficial thing for Wiggins. In recent years he's been landing more and more offensively gifted kids who want to play defense (Ian Miller, Terry Whisnant, Aaron Thomas, Xavier Rathan-Mayes), whereas his big recruits used to be raw kids who had exceptional length and athleticism.

For the school, it would be a game changer. FSU doesn't land top-10 recruits. Much less guys that might be No. 1 over the past several classes combined. This would be the boost that would elevate the fan interest to a level commensurate with the on-court success. And even if he doesn't choose FSU, just being linked to the No. 1 player will open the ears of other recruits. If Wiggins might go there, shouldn't they be more open to going there themselves?