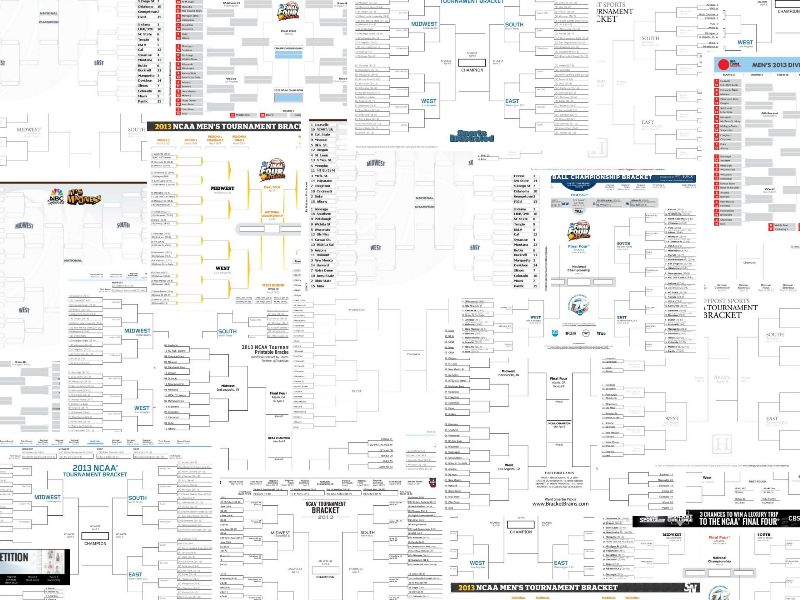 Last year I proved that not all printable brackets are created equal in the inaugural edition of the printable bracket power rankings. But with the spread of things like tablet devices, this internet thing and the Mars Curiosity rover, I figured it surely would be the last. I mean, people still print stuff? Like on paper and stuff?

Well. Fear not, for this year the internet proved to me that people love putting their deskjet printers to work more than ever. Plug in that dusty old HP, load up the papyrus and run to Walmart for some overpriced ink cartirdges, because the SEO wizards of the internet have been hard at work since Sunday making sure your browser lands at their "2013 NCAA Tournament printable bracket." Somehow most of them managed to work that exact phrase into the text of their bracket 18 times. Journalism!

Since there now are inexplicably more options than ever, how's a person to choose? The 2013 NCAA Tournament printable bracket power rankings presented by Run the Floor will guide the way. I'll start with this year's worst and work up to the best. 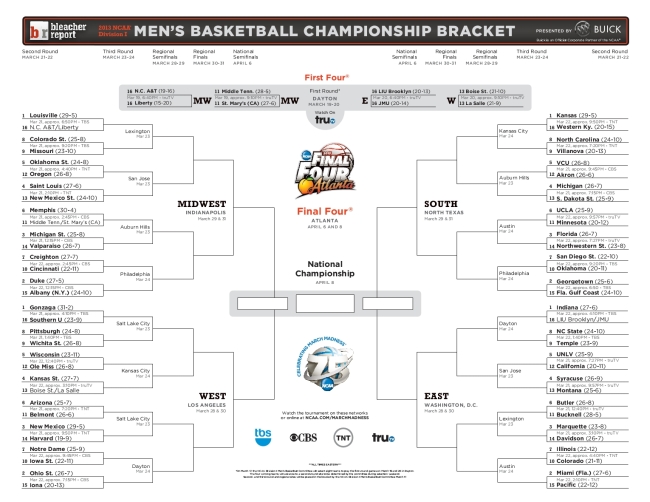 But this bracket looks GREAT. It lists seedings, team records, game locations and even dates, times and channels with minimal advertising! No. Bleacher Report merely took the official NCAA bracket, switched out the NCAA header for their own, tweaked some colors and called it their bracket. Cheaters never win, B/R.

As if the casual fan didn't have a hard enough time picking which 11-seed will make it to the elite eight, NBC Sports gives us first round matchups which include No. 6 Memphis vs. No. 11 MT St/St M and No. 1 Louisville vs. No. 16 NCA&T/Lib. Not only do you not when (what year?) or where (or if?) these games are being played, you can't even tell which teams they involve. MS Paint was a bad choice, NBC Sports.

Yahoo! found a new angle for 2013: simplicity. We may not know which year this bracket belongs in but Yahoo! has at least found alternative names for all rounds but the championship round and emblazoned them across the top. Nailed it, guys.

TeamRankings.com actually managed to work the word "bracket" into their bracket four times, but it's otherwise nothing special. Plus, it's very clearly "unofficial." They get some points for filling in game specifics and for including a section for the first-four games. 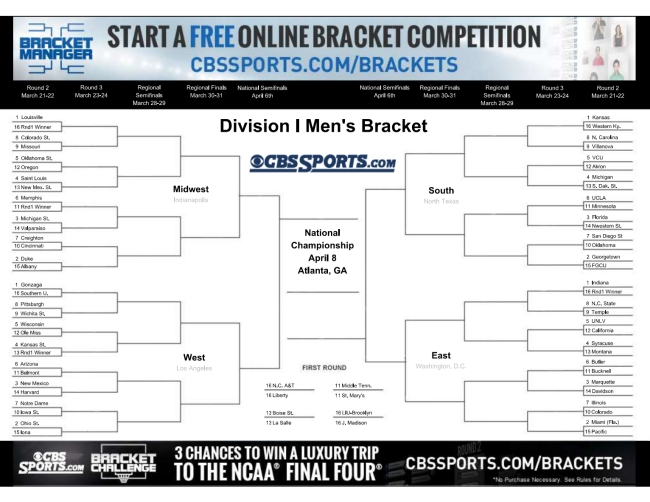 CBS Sports didn't mess around with providing any game or team detail, because they were too busy trying to cram in some truly intrusive ads. We get it, you have a website that has a bracket tournament. Add this one to the list of brackets that don't list a year. How do you not include the year?

Fox gives us about the same level of detail as CBS but with quieter advertising. There's still room for taking notes or doodling. The year is there, barely. 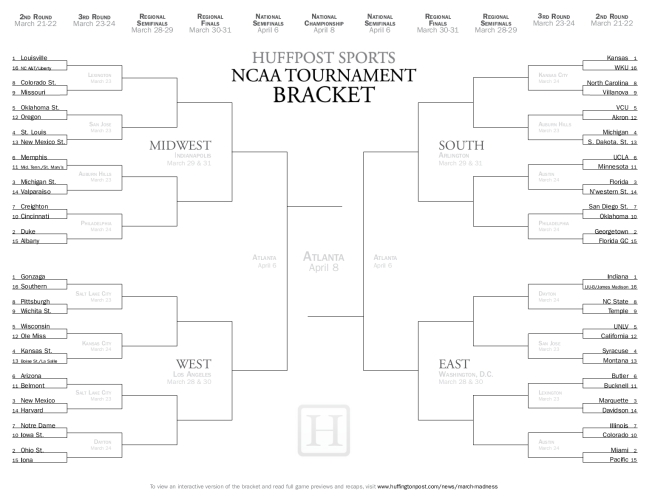 HuffPo improved on last year's stick-and-ladder exercise with an elegant bracket for 2013. Still, they seem to be only half committed to providing enhanced game details that look more like watermarks than actual text. This bracket isn't for the sight-impaired or for those whose printers are running out of black ink. And no, I have no proof that this bracket corresponds to this year. Maybe there's a hidden "2013." 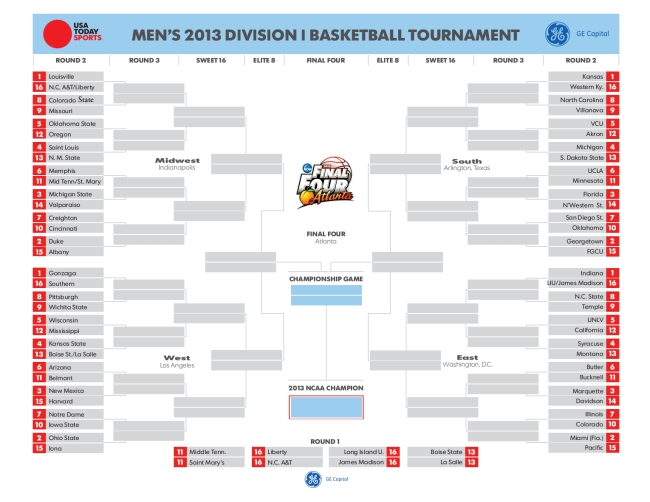 Is this not the most USA Today-looking bracket ever? It just needs a pie chart in the middle. They get points for genuine attention to design and minimal advertising. Surprisingly few brackets incorporated the 2013 Final Four logo, but I think it fits well in this instance. But I have to take points away from USA Today after considering that the pricey ink stores of most printers don't want to deal with this much color.

SB Nation is one of the pre-eminent kings of SEO when it comes to printable brackets. They have this thing plastered everywhere with plenty of search terms embedded in the accompanying text. That said, it's not great. This is the only bracket on the list that gives locations for the second round games but not for the regional games. The design, however, is eye-catching and there are no ads to speak of. BUT THROW A "2013" IN THERE SOMEWHERE. 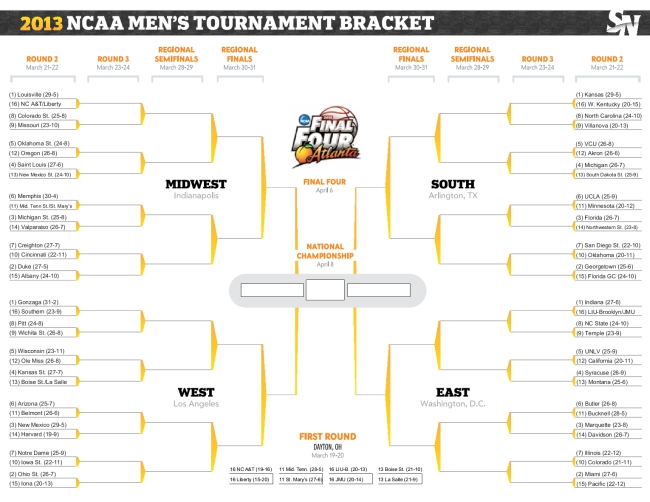 Now I know that team records have nothing to do whatsoever with projections, picks or pairings. They have no place in such matters. However, when you want to show your grandkids that Gonzaga had already won 31 games by the start of the 2013 NCAA Tournament and yet you correctly picked them to fall in the Elite Eight, team records come in handy. I appreciate that, along with the unobtrusive and sleek design of the Sporting News bracket. Oh hey look, it even says the year. 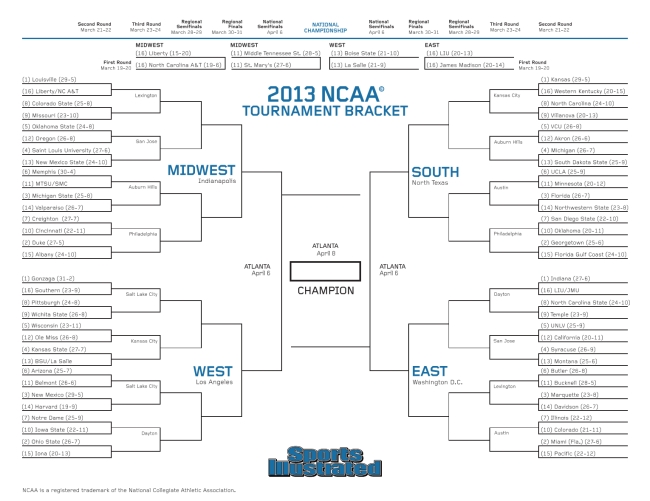 SI found the perfect mixture of game and team detail, and resisted the urge to include any advertising in their bracket's tasteful, if overly simplistic design. 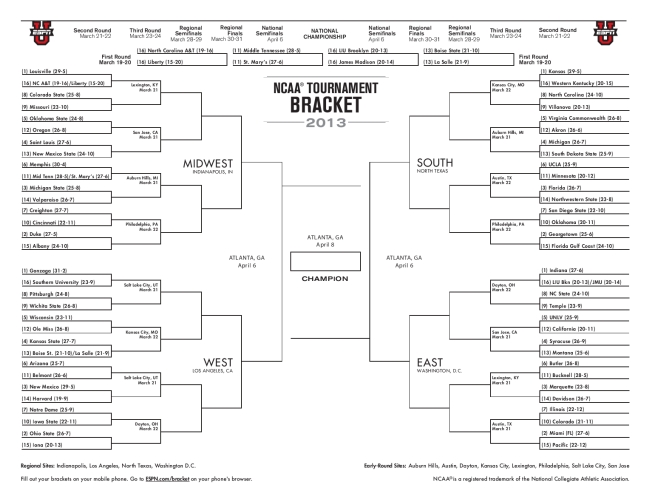 I know, what a letdown, right? But nobody even comes close to the official NCAA Tournament bracket. Nobody else list game dates and times together with locations and TV programming information. There's no greater bracket available, and Bleacher Report knows it.