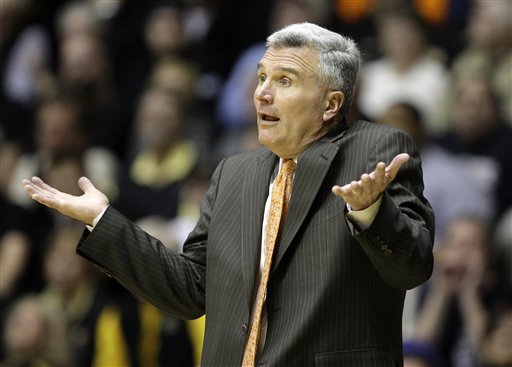 Getting into the field of 68 involves withering pressure for power conference programs that are supposed to set a higher standard. Once you're in the field, though, the conference tournaments offer an opportunity to move up two, three, or even four seed lines and radically improve a bracket. Which teams have the most to gain and which five have the most to lose in the next five days? Let's take a look.

Plenty of teams in college basketball soar at home but then crash on the road. There's perhaps no better example than Kansas State, which is "Popeye-just-ate-his-spinach" powerful in Bramlage Coliseum (named "The Octagon of Doom") but "Superman-in-the-presence-of-Kryptonite" impotent in Big 12 road games.

Kansas State is somewhere in the vicinity of a 9 seed (give or take a seed line) at the moment. The Wildcats are safely in the field, and what's more is that a lot of critics (this one included; one must admit when one is wrong in this business…) were skeptical of this team's ability to get to the NCAA tournament, given Bruce Weber's tenure at Illinois, in which he inherited really good players, won at a high level, and then couldn't sustain that level of success with his own recruiting classes. On Dec. 20, Kansas State was an NIT team, but Weber — to his great credit — developed a team that was strong enough to beat almost all of the Big 12's best competitors at home. That was more than enough to get the Cats into the field.

Now, Kansas State arrives at the Big 12 Tournament. These aren't home games, true enough, but they're not pure road games, either. Plenty of KSU fans will be on hand for this event, and with the Wildcats landing in Kansas's half of the bracket, there's a great chance to reach the final, given the health problems plaguing KU big man Joel Embiid. If Kansas State can get hot on a neutral court and win the Big 12 Tournament, it could rise to a 6 seed. At the very least, the team could get out of the 8-9 game and land at a 7, thereby avoiding a No. 1 seed in the round of 32. That's definitely something to play for.

The Big Ten Tournament has become the Thad Matta Invitational over the years. Ohio State completed a meteoric rise to a No. 2 seed last season, thanks to yet another Big Ten Tournament championship, Matta's fourth in Columbus and his third in the past four seasons. Matta has reached the final of the Big Ten Tournament in seven of the past eight seasons. He rules this event, and if Ohio State can do the deed again, the Buckeyes — despite struggling for so much of the season — could land on the 4 line on Selection Sunday. There's so much fluidity in the 3 through 8 seed lines that a strong conference tournament showing should offer a lot of value to a power conference team.

The Tigers get to play the American Athletic Conference Tournament at home. They get to face, in all likelihood, three of the other top teams in a league that will send five to the Big Dance. Memphis is somewhere in the vicinity of a 6 or 7 seed right now. Some skeptics might say the Tigers are an 8. If this senior-laden team, playing in its own building, can run off a three-game winning streak against Connecticut (quarterfinals), Cincinnati (semis), and Louisville, it should find itself on the 4 line when the brackets are announced. This is a big opportunity for Josh Pastner to leverage the conference tournament into an event that can give him and his program a shot to make the Sweet 16, which would really enhance his career.

Louisville was a 3 seed in late February of last season. It ended up being the No. 1 overall seed in the 2013 NCAA Tournament. No, Louisville won't be on the 1 line this time, but the Cardinals can definitely move up to the 3 line — out of the path of a 1 seed until the Elite Eight — if they win The American's conference tournament. That's a very good prize to play for. Any team that can get on the 3 line instead of the 4 line should regard that as an important way to improve one's bracket path.

The Wildcats, due to their wins over Kansas and Iowa in the Battle 4 Atlantis early-season tournament, have been able to climb to the top seed line despite being crushed (twice!) by their one formidable conference opponent, Creighton. The Wildcats could go 1-for-3 against the Bluejays this season and yet solidify their place as the 1 seed in the East Region. They could play the Big East Tournament in Madison Square Garden, win it, and then return to MSG for the East Regionals in two weeks. That's a mighty charmed life for a team that got whacked by Syracuse in addition to its two blowout losses to Creighton.

The first ACC Tournament graced by the presence of the Pittsburgh Panthers and Syracuse Orange will be an immensely consequential one for both programs. That's just one of the realities of Championship Week, a time when great prizes are waiting to be won… and lost.

Yes, the Colorado Buffaloes should definitely be able to beat last-place USC in a Pac-12 Tournament first-round game on Wednesday afternoon. As long as CU tucks away that win, the Buffs should be safe as far as the NCAA tournament is concerned.

But if Colorado loses…

You get the point.

CU was snubbed for the NCAAs in 2011. Losing to USC and being relegated to the NIT would devastate coach Tad Boyle and his program. That's a lot to lose in one game. Colorado needs to take care of business on a neutral floor in Las Vegas, a city where dreams get shattered on a relentlessly regular basis.

Saint Joe's just had to beat La Salle at home in its regular season conference finale to feel safe, but NOOOOOOOO. The Hawks just had to complicate their lives a great deal. If they don't win their Atlantic 10 Tournament quarterfinal on Friday afternoon, they'll probably miss the field of 68. No pressure, Phil Martelli. No pressure at all.

Much like Saint Joseph's, Arkansas just had to beat an inferior conference opponent in its regular season finale to feel good about its NCAA hopes. A blowout loss to Alabama, though, has pushed Woo Pig Sooie back to the middle of the bubble. Winning both a second-round SEC Tournament game (against a 12 or 13 seed) and a quarterfinal against Tennessee are musts for the Hogs in Atlanta.

To underscore how crushing an NIT appearance would be for Arkansas, simply appreciate the extent to which this team flourished in the immediate aftermath of its win in Rupp Arena against Kentucky. Arkansas creamed Georgia and then hammered Ole Miss with ruthless efficiency. It seemed as though the Razorbacks had turned the corner as a program, but the Alabama face-plant brought back all the pre-Rupp road demons that have haunted this school in the Mike Anderson era. Missing the NCAAs would remove most (if not all) of the meaning of that win in Rupp, creating the kind of setback that derails programs and leaves permanent psychological scars that, in some cases, are never able to heal.

If Pittsburgh — like Colorado, a fifth seed in a conference tournament that must play a preliminary-round game against a double-digit seed (12 or 13) — somehow manages to lose, Selection Sunday will offer an avalanche of anxiety. As long as Pitt avoids that stumble, it will be able to breathe a little bit, but if the Panthers then get hammered by North Carolina in the ACC quarterfinals, they would still enter March 16 without total certainty that they're going to be in the field. If Pittsburgh could notch one impressive win before Selection Sunday, this team could alleviate a lot of concerns. It could also avoid the First Four, which is where it might end up if it beats the 12-13 play-in winner but then gets throttled by Carolina.

The Orange can play four NCAA tournament games in the state of New York. They know they'll play the first two games in Buffalo, but they have a chance to stay in the East Region and play the regionals in Madison Square Garden. No team has a better location-based path to the Final Four than Syracuse does. However, the Orange must make the ACC Tournament final to have a good chance of staying in the East Region. Duke and Virginia (within the ACC) plus Villanova, Wisconsin and Michigan could all get a 2 seed in the East and push the Orange to a different region if Jim Boeheim's team can't win a potential ACC semifinal against Duke on Saturday.

No Final Four contender has more to lose this week than Syracuse.

Copying and pasting my Twitter bio. I'm also refusing (for now) to write this in the third person. This is me - CEO of @Bloguin, GM at @AwfulAnnouncing, world's greatest chinese jew, proud Buckeye, funny dude, and sports and digital media zealot.