You can see it in the photo above.

Josh Gasser knew that Kentucky could beat his Wisconsin team with a three-point shot at the end of regulation. Yet, with the clock ticking under 10 seconds at AT&T Stadium, Gasser froze six feet from where Aaron Harrison — Kentucky’s dagger-wielding freshman — was standing. He was quite late in getting to Harrison’s shooting hand when placed in a man-to-man situation with no other evident defensive responsibilities.

Was Harrison’s 26-foot shot the best shot Kentucky could have gained in that situation? Hardly. Was it a shot Harrison has been hitting most of the season? Not even close. Was it a shot that Harrison would have made three weeks ago during the SEC Tournament? Nope.

It’s also true that on most possessions, a defense would be all too happy to concede such a look to a man who was a below-average three-point shooter for the balance of four and a half months. On most possessions, Wisconsin would not have minded giving Aaron Harrison a free shooting hand that far from the basket. Gasser would have made the proper percentage-based play in sagging off Harrison, ostensibly playing him for the drive and not the shot.

There was just one problem with that possession: It wasn’t “most possessions.”

Time-and-score. You hear about it often at the end of a basketball game, and a lack of attention to this simple detail gave Harrison the clean and free release he needed to send the Wildcats to the national championship game of the NCAA tournament for the second time in three seasons.

It’s not as though the rest of this contest was forgettable or irrelevant. Big Blue and the Badgers produced a terrific high-level competition in which both teams took turns showcasing the kinds of skills that brought them to the Final Four’s national semifinal stage.

Kentucky played volleyball above the rim during its second-half surge, and the Cats used their raw power to stay close in yet another first half in which they trailed by at least nine points, a common theme over the past two weeks of tournament play for John Calipari’s kids. Julius Randle was Julius Randle. Alex Poythress made a few key plays. The Harrisons chipped in just enough to give UK a reasonable degree of balance, preventing Wisconsin from packing the paint to an even greater extent.

Wisconsin matched Kentucky play for play throughout the night. The Badgers received step-up performances from their wings and two-guards, just as they needed. Bronson Koenig and Duje Dukan were the unexpected contributors, while Ben Brust and Sam Dekker carried their share of the workload. Frank Kaminsky didn’t run wild, but he certainly held up well against Kentucky’s big men, enabling the Badgers to contest this game on even terms. All told, Wisconsin had a two-point lead heading into the final 10 seconds.

Everyone inside JerryWorld knew the score… and the time-and-score situation attached to it.

Yet… look at this photo below: 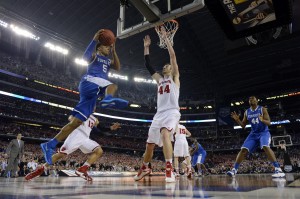 Just before Aaron Harrison hit his shot, Andrew Harrison was trapped under the basket. Yet, he was able to make a soft bounce pass from this position all the way to the three-point line. Wisconsin’s attention to detail on defense simply didn’t emerge in this game-deciding sequence.

It is undeniably easy to sit here from a keyboard and pick apart the flaws of one possession in one span of a handful of seconds. Had you or I been in Josh Gasser’s position, the instinct to let a not-very-pure shooter try a 26-footer in a do-or-die situation might have kicked in, especially since that thought process would have rightly governed most of a 40-minute game. Moreover, no matter what else you might think of that shot by Harrison:

B) A lot of pressure accompanied it.

C) A young kid who had allowed pressure to be such a burden for him and his Kentucky teammates for four and a half months was able to once again make it when an NCAA tournament game’s outcome hung squarely in the balance.

It’s true: The first thing to do in a moment such as this is to tip your cap to Aaron Harrison, clutch shotmaker.

The debate concerns the extent to which Wisconsin could or should have done anything to try to alter the outcome.

Your mileage may vary, but the verdict here is that if you’re two to three feet from a defender and can readily get your arm on top of the shooter’s release, you’re doing what you reasonably can. The cover photo at the top of this piece shows that Gasser was flailing, clearly a bit tardy in an attempt to crowd Harrison’s shooting hand. It’s not a terrible defensive lapse to give up a 26-footer to a college player whose name isn’t Brady Heslip or Michael Frazier (or some other proven sniper), but in the narrow context of time-and-score, yes, it’s certainly something Wisconsin could have done better.

Kentucky and Aaron Harrison, though, once again found last-minute magic in a way that was eerily reminiscent of Big Blue’s win over another Big Ten team, Michigan, last Sunday.

That should indeed represent the last word on a highly entertaining Final Four semifinal: Wisconsin might have made a slight error at the end, but Kentucky was good enough to make a slight error matter.

Now, the Wildcats will get to play a seventh-seeded opponent, the Connecticut Huskies, in a national title game unlike any other — right, Jim Nantz?

One wonders if Aaron Harrison and Kentucky can author yet one more 40-minute story of Deja Blue.