In every Final Four, plenty of narratives vie for attention. Phrased differently, a lot of fans might contend that sportswriters pit various narratives against each other. No matter what your own viewpoint might be, Saturday’s first national semifinal at AT&T Stadium witnessed a script-flipping performance by the Connecticut Huskies.

An NCAA tournament championship game will be contested by a 7 seed for the first time since the Big Dance began to be seeded in 1979. This is true for many reasons, but the essence of UConn’s triumph can be found in the fact that it used a Florida-like approach to beat the Gators.

The familiar expression, “If you can’t beat ’em, join ’em,” was turned upside-down by Kevin Ollie’s kids inside a massive domed edifice. Connecticut defeated Florida precisely because it joined the Gators in a game that was constantly shaped and reshaped by perimeter defense more than anything else.

Consider the way in which Huskies-Gators unfolded. This was not a game decided in the paint. Florida’s Patric Young was one of the two Gators that actually played well, Casey Prather being the other. The Gators fought well in this game, staying close (43-40 inside the eight-minute mark of regulation) despite a near-total lack of production more than 14 feet from the basket.

The point of separation between these two teams was the perimeter. Ironically, Florida sharpshooter Michael Frazier started this game with a three, and the Gators spent the first 10 minutes looking like the No. 1 overall seed in the NCAA tournament, swarming UConn guards Shabazz Napier and Ryan Boatright whenever they caught the ball. Billy Donovan’s plan of attack on defense was excellent. Every Gator contributed to the early 16-4 push that made Connecticut look like a 7 seed in April.

The essential insight from the first 10 minutes of play was that Florida’s team defense — with no one player hogging the ball or the credit — dictated anything and everything about the matchup. UConn wasn’t getting anything easy in transition; only Florida was running off misses or turnovers, and if the Gators had managed to hit a few more shots in those first 10 minutes, they could have blown the game open.

Connecticut could have realized that it was no longer playing in Madison Square Garden, no longer blessed with an improbable home-crowd advantage that was the product of an entirely preventable bracketing error by the selection committee on Selection Sunday, March 16. The Huskies could have been awed by the stage. They could have remained petrified by Florida’s imposing defense.

Yet, as Ollie told TBS’s Tracy Wolfson at halftime, “These kids are fighters.”

They also copied Florida’s very blueprint for success in the final 30 minutes of this game.

After Florida threw its roundhouse punch in the early going (but without landing a 24-4 knockout blow or something to that effect), Connecticut looked at its opponent’s plan and copied it to perfection.

Frazier, who popped open for an easy three in the game’s first minute, didn’t get another meaningful look at the basket with any kind of space. Scottie Wilbekin, Florida’s best player this season and in the first four games of the NCAA tournament, was hounded into a nightmare game, as the above cover photo shows so clearly.

In addition to shutting down Florida’s three-point game (the 0-for-3 evening from long range by Dorian Finney Smith proved to be decisive in this contest), the Huskies advanced to Monday night by getting steals and easy baskets on the perimeter.

It’s worth specifying that UConn didn’t merely get baskets off turnovers; it got baskets by picking Florida’s two primary ballhandlers, Wilbekin and backup Kasey Hill. It’s true that Hill has at times struggled as a passer, and he did make a few wobbly passes in this game, but UConn took an otherwise-even struggle and created a working margin down the stretch because it was specifically able to swipe the ball directly from Hill and Wilbekin. That’s something which has not befallen Florida all season long. Connecticut made Florida’s guards look unusually bad, something that’s not very easy to do.

The biggest steal-and-basket of the evening came below, and it pushed UConn’s lead to seven with just under seven minutes left, shortly after a Florida push had trimmed a fat Husky lead to only three: 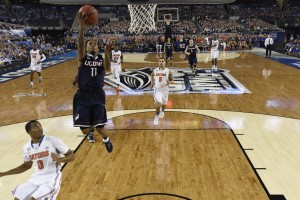 This is the basket that forced Florida to climb one more steep hill in the final seven minutes, a feat the Gators were unable to pull off.

The collection of points the Huskies gained from Wilbekin and Hill alone was enough to turn the tide. As a point of comparison, you didn’t see nearly as many mistakes from Napier, Boatright, or anyone else on UConn’s roster.

Here’s an added dimension of differentiation between the two teams: Florida received terrific performances from Young and Prather, but no one else made any kind of sustained (positive) impact on this 40-minute event. Connecticut received a spectacular outing from DeAndre Daniels (20 points, 10 rebounds), but the true difference for the Huskies from a box-score standpoint is that they placed four scorers in double figures without any nightmare scoreline from any one player.

Connecticut won with balance. This — not just letter-perfect defensive rotations on the perimeter — was part of Florida’s template during the regular season and in the first four games of the NCAA tournament.

Why is UConn playing for a fourth national title on Monday night?

The Huskies used Florida’s own formula… and denied the Gators the ability to compete for a third national crown in the process.