Once rosters finish sorting themselves we’ll be able to start our team and conference previews, but one thing that is set are the early entries into the NBA draft. This is typically a power conference affair, and this year is no different. Damian Lillard and Will Barton are the only non-BCS conference players expected to be drafted from among those who left school early.

Terrell Stoglin was the late jumper into the draft, but otherwise the names have been settled for a while. How will Stoglin’s – and everyone else’s – departure affect conference strength?

First, a look at 2011-12 conference strength. According to Ken Pomeroy, this was a down season at the top of college basketball. He had the Big Ten as the top rated conference, but their metric was the lowest to lead the nation since his ratings began a decade ago. Here are the top 10:

Here’s how those conferences will be affected by players leaving early for the draft. In the conference previews I will tackle transfers and graduates.

Already the best of the power conferences, the Big Ten loses the fewest players. Jared Sullinger (Ohio State, sophomore) will obviously be a big loss. Of the 38 players in this analysis (I removed a few players who won’t be drafted, and left school for reasons other than a chance at the NBA) only three had a higher offensive rating than Sullinger. In Pomeroy’s player of the year rankings, Sullinger was 3rd. He averaged 17.5 points and 9.2 rebounds, and was one of three early entries to average at least 16 and 9. Meyers Leonard (Illinois, sophomore) was the other player lost. That makes two centers out of the Big Ten (and promotes Cody Zeller to the top big in the conference). Leonard isn’t as big of a loss as Sullinger, but only on the conference level. To his team, it’s huge. The 7-0 Leonard easily had the highest offensive rating on the team, and was their best rebounder as well. Could either of these guys be drafted in the high lottery? You can find the betting top 10 here. 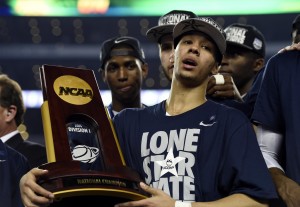 The Big 12 is taking a big hit. And it would be “worse”, but one of their players will be counting against the SEC. Thomas Robinson (Kansas, junior) is the biggest loss. Robinson finished second in Pomeroy’s national player of the year ratings, and was a monster on the glass. His defensive rebounding rate led the nation. On the season he averaged 17.7 points and 11.9 boards. Baylor loses Perry Jones (sophomore) and Quincy Miller (freshman), which is a ton of talent, though neither player performed as well as others on this list. Both need a polished outside game in the NBA, and neither showed it, but I’m always of the mindset that players will develop more quickly in the pros when there are no limitations on practice time. If you are a guaranteed first rounder, go. Now we’ll wait and see if Miller fits that description. Iowa State loses Royce White (sophomore), who fits into the Baylor mold, of a high risk/reward type player who is unrefined at this stage. Iowa State doesn’t get talents like White very often, and he’ll be missed. Though to be fair, only three early entries had a lower offensive rating. J’Covan Brown (Texas, junior) did everything for the Longhorns this season, including taking 32% of their shots when he was on the floor. And he managed to be very efficient. He might not get drafted, but his impact is huge.

Despite ESPN’s constant pimping of the Big East they haven’t been the top rated conference (by Pomeroy) since 2006. This year was no different. And if Syracuse and Pitt can buy their way out a year early, the Big East probably won’t be in the top-3 for the foreseeable future. It doesn’t help that they lose the second most players to the draft (8). Villanova loses Dominic Cheek and Malik Wayns (both juniors). Villanova was a bad team this season, and losing the two players who were No. 1 and 2 in both minutes and offensive rating won’t help. Between the two they managed to take over half the shots when they were on the floor, and somehow maintained high offensive ratings despite terrible 3-point shooting. Dion Waiters (Syracuse, sophomore) was the best player on the Orangemen, and combined with the early entry of Fab Melo (junior) and two other starters to graduation, it will be a reloading year. UConn is the third team to lose multiple players to the draft. Jeremy Lamb (sophomore) and Andre Drummond (freshman) are both gone. Lamb didn’t have the all-world season that was expected, but he was still excellent. Drummond showed flashes of ridiculous athleticism as a freshman and he would have been fun to watch develop. Moe Harkless (St Johns, freshman) was a high volume freshman who occasionally didn’t play like a freshman. The last player is Hollis Thompson (Georgetown, junior) was high volume with a 110+ offensive rating – in other words, he’ll be very hard to replace – which is a theme amongst the Big East early entries.

Even without Kentucky, the SEC loses a ton of talent. Yes, Anthony Davis, Michael Kidd-Gilchrist, Doron Lamb, Terrance Jones and Marquis Teague are gone, but that’s been covered to death. It’s huge. It was expected. Vanderbilt loses John Jenkins (junior) who played the most minutes of any Commodore and had an insane offensive rating over 126. Sorry, Vanderbilt. Florida also loses their best player in Bradley Beal (freshman). As the season wore on he became more comfortable taking over games, and would have been a candidate for 1st team All-American had he returned. Arnett Moultrie (Mississippi State, junior) was the other huge loss. He averaged a double-double, but didn’t get the press of Renard Sidney (junior) for all the right reasons. Justin Hamilton (LSU, junior) is gone, and not many will notice. Tony Mitchell (Alabama, junior) is gone too, but it would have happened one way or another. Might be addition by subtraction. And then Khris Middleton (Texas A&M, junior) is gone before ever stepping foot in the SEC. The Aggies were surprisingly bad this year, though not for lack of Middleton jacking shots. Unfortunately, not many went in.

The ACC loses five players, and three of them come from the Tarheels. Harrison Barnes (sophomore) was the player everyone liked to make fun of in order to defend their own silly expectations for him created two years earlier. Though to be fair to the naysayers, he didn’t develop much – if at all – as a sophomore. Kendall Marshall (sophomore) had his season end prematurely, but he proved he could make shots when no one guarded him, and his assist rate was still the third best in the nation. And John Henson (junior) showed an offensive refinement that had been missing. His offensive rating had been dismal his first two years, but he improved it to a very respectable 107.0 this season. Austin Rivers (Duke, freshman) showed flashes of brilliance in between bouts of freshmanitis. He’ll be missed mostly due to him being the only Duke player capable of creating his own shot. And finally, Terrell Stoglin (Maryland, sophomore) discovered he was being suspended for next season and went ahead and made the jump at the last minute. His impact is huge. Only two players in the nation took a higher percentage of shots when they were on the floor, and Stoglin managed to be very efficient (offensive rating 110+). See John Jenkins comment above.

Washington was the big loser in the early entry game, losing both Terrence Ross (sophomore) and Tony Wroten (freshman). They managed 56% of the shots when they were on the floor, and Ross did so with a high efficiency. Wroten was the typical high-volume low-efficiency freshman. Oregon State loses Jared Cunningham (junior) who led the team in everything. He’s the classic player who will be missed at the conference level, but his loss at the team level could be devastating. The same can’t be said for Reeves Nelson (UCLA, junior) who got kicked off the team for being a world class asshat.

The lone departure from C-USA was Memphis star Will Barton (sophomore). Barton averaged 18 and 8, and played more minutes than all but one player in the conference. He finished 5th in Pomeroy’s national player of the year ratings.