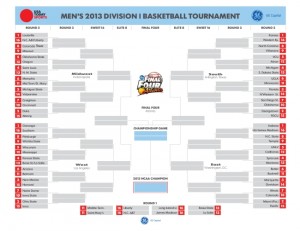 Plenty of events have never occurred in the first 75 NCAA tournaments. Naturally, as the Dance has grown from its humble eight-team roots to its present size of 68, the weight and significance of various achievements have changed to a certain degree. Yet, the permanence of the word “never” can still mean something. Here are five cases in which it does:

Crazy, right? It’s true: 1975 (under then-coach Roy Danforth), 1987, 1996, 2003, and 2013. You could look it up. The Orange are always knocking on the door, and their run to Atlanta last year provided much-needed ballast to Jim Boeheim’s legacy. Yet, when the Cuse gets in the house (oh my god, oh my god), it doesn’t stay there the next year or return the year after that. A Final Four in 2014 would enable Jimmy B. to finally claim the kind of achievement that the sport’s greatest coaches usually (though not always) manage to attain at some point in their careers.

4 – KANSAS HAS NEVER LOST TO A No. 1 SEED IN A REGIONAL FINAL

Roy Williams beat Arkansas in 1991 in Charlotte; Indiana in 1993 in St. Louis; and Arizona in 2003 in Anaheim. Bill Self defeated Roy Williams and North Carolina in 2012 in St. Louis. Ever since the NCAA tournament began to be seeded in 1979, KU has come through as a two (or as a three) when playing a top seed in a regional final.

If KU faces Florida in the South final, Billy Donovan should be nervous. The question, of course, is if the Jayhawks can even get to the Elite Eight without that lad named Embiid.

New Mexico did win two games in the 1974 NCAAs, but the second win was a regional third-place game following a Sweet 16 loss. The Lobos and Billikens have fielded good teams over the past few decades, with Saint Louis making the Dance in prior decades under the late, great Charlie Spoonhour before Rick Majerus came along. It’s quite remarkable that neither program has been able to stack together two straight wins in the same NCAA tournament.

Providence could pull off the upset of North Carolina — one never knows which Carolina team (and which James Michael McAdoo) will show up. Yet, history — if it is any guide — tells us that the Friars will be tucked into bed and sent home.

Wichita State fans are praying for Saint Louis to win two straight games in the same NCAA tournament for the first time ever (even though Gregg Marshall is surely going to welcome the challenge and not give two fire trucks about the matter).

Tweep (and Kansas fan) Bradley Hope contributed information that went into this report.