The Cascadia Cup was created via the shear will of organized fan groups of the Portland Timbers, Vancouver Whitecaps, and Seattle Sounders.

Originally this competition started in 2004 in the North American Soccer League. How much more grass root soccer can you get?

The rules are simple; the Timbers play every Northwest team three times each. The team with the most points accrued from playing the other Cascadia clubs at the end of the season is crowned the champion of the Cascadia Cup. Think of it as a three-pronged round robin mini tournament within MLS.

Some of the details surrounding the cup are still a bit unsettled. For example, how do you get an even amount of home games for each team when playing against the same opponent three times? If the Timbers play Vancouver three times, one of the clubs has the advantage of playing at home twice.

Enjoy this Tifo by the Portland Timbers before a Cascadia Cup match against the Seattle Sounders. Oh, how I adore the Pacific Northwest.

Events such as the Cascadia Cup are fantastic for the overall growth of soccer and MLS. The bragging rights have transitioned to MLS, and the rivalry has only continued to grow since its inception.

Competition is needed to help a team develop. Having multiple players in the same position pushes everyone. Same thing goes when talking about a league.There must be fight, challenges and respect between clubs so squads can elevate their level of play.

And right now, the Vancouver Whitecaps are asserting an early dominance in the competition. Vancouver has played two games, one against the Seattle Sounders and one versus the Portland Timbers, and Vancouver has won both. They’ve jumped out to a six-point lead. Since the adjustment to the six-game series for the Cascadia Cup in 2012, Vancouver has won the mini tournament with the least about of points, nine.

History is telling us that it’s plausible to win the Cascadia Cup with just nine points, and with the Whitecaps already soaring with six points, victory this weekend against the Portland Timbers may be the dagger for the trophy. 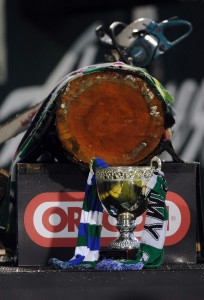 But it won’t be that easy to topple the Timbers. It never is. Fernando Adi is leading the lines for Portland and with eight goals in 12 games played. Adi is currently tied for being the leading goal scorer in MLS. He’s in good company as well. Sebastian Giovinco and David Villa are the other two with eight goals to their names. Although Adi does have the best goal to minutes played ratio. Just saying.

You can read more about Fernando Adi no longer being a diamond in the rough here.

However, the real reason as to why the Timbers can stop the Whitecaps is through the actions of Diego Valeri. He needs to start being called Valyrian Steel. See what we did there?

Disclaimer, my best mate, came up with the term, he said I could use it.

So if you watch Game of Thrones, this discussion is over. It makes sense as to why the Timbers can beat Vancouver. But in case you don’t follow the show, we’ll continue.

Valyrian Steel would essentially be the grandest sword one could wield in the realm of the book/T.V. series. Valyrian steel is the sharpest, strongest and lightest blade. If you play RPGs, like I do, the stats for this sword would be ridiculous. It’d be some kind of legendary sword that makes defeating the most difficult opponent in the game possible.

I’m sure it’d be enchanted as well.

Can we get Bethesda on this? Bethesda makes the Elder Scrolls and Fallout series. It would consume my life.

Now that we know what Valyrian Steel is, let’s move forward.

Diego Valeri gives the Portland Timbers an edge. His vision and technical ability separate him from the pack and it’s these skills that allow him to play as an enganche most effectively. He’s able to slice the defense wide open with a clever through ball, or open pockets of space on the field for his teammates with the distribution of the ball.

You can read more about what really makes Portland and Valeri tick here.

Let’s put it all together.

Having Adi come of age and begin to be a big presence for the Timbers and Valeri being the man with the deft touch to provide service for Adi, the career of both players will only continue to flourish.

Don’t worry about Portland’s early season form. During their 2015 MLS campaign, they only won three games, tied four and lost five games in their first 12 matches. They went on to win the 2015 MLS Cup thanks to a winning stretch of six games in seven matches. The 13th game of the season started the run of winning games.

And with their 13th game of the 2016 season being against the Vancouver Whitecaps in the Cascadia Cup, I don’t see a more appropriate way for the Timber to match their execution of last season.