Please consider reading the series in order, it’ll make the journey flow better. But don’t worry, each individual piece will make sense on its own too. It’s your choice. This is No. 4.

If you haven’t read the first article of the series, you can do so here.

El Grupo de la Muerte, or the group of death is as vintage as the Copa América tournament itself.

The concept was born from the 1970 World Cup. Mexican media found no other way to describe the audacity of featuring England, the 1966 World Cup Champions, Brazil, the hype team entering the tournament, Czechoslovakia, the second place finishers in 1962 and Romania all in the same group.

Brazil ended up navigating the group and became champions of the world in 1970.

Back in the day, only one team advanced from each group.

There was no round of 16, and instead the tournament progressed straight to the quarterfinals.

Scary eh? Fútbol doesn’t mess around. You either show up in the group stage, or you’re going home, quickly.

But times have changed. Now the top two teams from each group continue on, as do the best two third-placed teams. While it’s true that perhaps now there’s less difficulty leaving the group, the manner in which you advance has become all the more important.

Yes, the USMNT may traverse the inhospitable group stage and make it to the knockout stages, but with what hopes?

The lower seed you end up with in the group stages, the more difficult and elite of an opponent the USMNT may be paired with for the knockout rounds.

So maybe the modern Grupo de Muerte has its most poisonous effects on the later stages of the tournament. When things are most crucial, when it’s ‘win or go home’, when a nation holds hope, that’s when the curse of the group of death takes hold. It’s a latent syndrome, El Grupo de Muerte; it’s advancing as third place from your group only to mount the insurmountable challenge of tackling a South American juggernaut.

So far, it’s not boding well for the USMNT after a 2-0 loss to Colombia in the tournament opener.

Jürgen Klinsmann offered up the following during the Colombia post match conference “we were absolutely O.K. with the team’s performance… but overall I mean, we were totally even. We didn’t give them anything…overall I was really pleased with the performance of the team”.

I don’t think Jürgen and I saw the same game. It’s the only way he could have said those comments in the conference with a straight face. The game was an absolute disaster.

Out of respect for the competition, the honor of hosting such a grand tournament in our backyard and the hope of the progression of the soccer in the United States, that performance should not have ‘pleased’ a single person, let alone the head coach of the USMNT.

Perhaps there was a parallel universe in which Jürgen thought it would be appropriate to name Michael Bradley the captain of the USMNT? How many times did Bradley gift the ball to the opposition? Seriously, I want to know; there’s probably some ridiculous statistic on the matter. 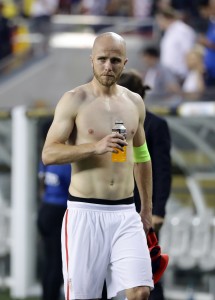 SANTA CLARA, CA – JUNE 03: Michael Bradley #4 of United States leaves the field after losing to Colombia during the 2016 Copa America Centenario Group match between the United States and Colombia at Levi’s Stadium on June 3, 2016 in Santa Clara, California. (Photo by Ezra Shaw/Getty Images)

It’s not his fault. Bradley is being asked to do something he is incapable of doing, at least at the international level.

In this parallel universe, Jürgen’s tactics were appalling. How one reaches the conclusion of pairing Bradley with an aging 34-year old Jermaine Jones in the heart of the midfield is mind-boggling. Jones was constantly overrun. Colombia’s Cuadrado, a man whose game is based on speed, trickery, and predatory instinct, was essentially able to frolic his way down the sideline into U.S. territory over and over again.

I was completely confident that at half time, being 2-0 down and having seen the team run amok, substitutions would be made.

There were no changes at half-time.

What does the USMNT even play at anyways? What’s their method of attack? Do we absorb pressure, play to our midfield, move the ball out wide, run the length of the field with our speed and crash the box on the counter? Do we control build up play, link the midfield and play out wide to meet an incoming cross? Or do we just kind of get the ball to Dempsey’s feet and let him figure it out?

P.S. We do the last option.

The single most important theme of tactics is ‘how do we get the ball from our defense to the back of the opposition’s net?’ If you aren’t working towards that goal in a clear and concise way, in a way that every member of your squad understands and can work towards, then why even set a starting lineup?

Honestly, we might as well have thrown 11 players on the pitch for a local Sunday League. Sundays are the land of tactical emptiness.

Forget about the elementary level tactics; the wayward passes, the lack of an offensive game plan. Forget about it all.

P.S. If the world started to crumbling during a soccer match, I always image meteorites crashing down in the distance for some reason. Maybe it’s the sci-fi nerd in me. Plus at that point, there’s no other option, but to play as if it’s your last game. Poetic.

The USMNT showed the world a hollow and nonchalant performance, and it was utterly inappropriate. Give me a 5-0 loss to Colombia on the back of crunching tackles; white jerseys infected with the stains of the pitch, and I would be applauding our team.

If the level of play between the USMNT and Latin American juggernauts is still too far to close the gap, at least play with pride.

I ask for nothing more.

Although Jürgen did promise to raise the USMNT to another level, the thought seems almost ludicrous now.

The USMNT plays today against La Selección de fútbol de Costa Rica/Los Ticos, and if something doesn’t change soon, the US can see themselves be placed out of the knockout stages.

This presents an interesting situation. Will Jürgen start the same players as the previous match? I hope not. Give Nagbe a start in the midfield and let him do what he does. Is he wearing the number ’10’ just for show?

Nagbe has the engine, intelligence and passion to spark a stuttering USMNT.

Why not be brave and hand the reins to Christian Pulisic? If he’s too young, then why is he at the tournament?

Unleash the full potential of the USMNT. Unleash their love for the game for the world to see.