We as a society really value our cell phones nowadays, and Dallas Cowboys running back Darren McFadden is no different. McFadden reportedly broke his right elbow and underwent surgery on Tuesday, but the nature of it is not what you might expect. Cowboys RBs coach Gary Brown said Darren McFadden fell Memorial Day weekend on […] The NFL’s Twitter account was hacked on Tuesday afternoon, and it was “reported” that NFL commissioner Roger Goodell had died. He didn’t, though. It didn’t take long for news to surface that the commish was alive and well, and that the league’s account had been hacked. Goodell was supposedly playing golf with HOF quarterback Jim […] Everyone’s getting hacked these days. Folks can no longer give an eye roll when an NFL player claims one of his social media accounts got hacked. Why? Tuesday it happened to the NFL in epic fashion. A prankster got ahold of the account one way or another and spoofed the death of commissioner Roger Goodell: […] Over the past week, Jacksonville Jaguars receiver Allen Hurns and Minnesota Vikings safety Harrison Smith cashed in with huge contract extensions. Hurns, a former undrafted free agent, signed a four-year, $40 million deal, while Smith became the league’s highest paid safety with a five-year, $51.2 million extension. The pair won’t be the last to sign […] Scripps National Spelling Bee co-champion Nihar Janga gained quite a bit of fame Thursday night. Jahar is such a star that Dez Bryant is just hoping to meet the 11-year-old. Janga and Jairam Harthwar finished in a tie and shared the title. When Harthwar went to high-five him, Janga left him hanging and instead threw up Bryant’s […] The 2016 NFL season is fast approaching and organized team activities are in full swing. Thirty-one teams held OTA sessions this week. The Rams begin theirs on May 31. These practices aren’t in pads, so there’s only so much that can be taken from them. But it’s the first time the rookies and veterans are […] The Cowboys are spewing the company line that No. 4 overall draft pick Ezekiel Elliott has to “earn” the starting job at running back. Elliott is practicing on the second team behind Darren McFadden at organized team activities, according to the Fort Worth Star-Telegram. He’ll also have to “compete” with Alfred Morris on the depth […] 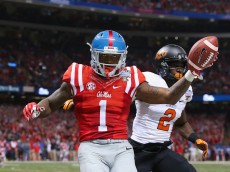 Organized team activities, commonly known as OTAs, begin in earnest this week in the NFL. Each team is allowed 10 OTA sessions. The Cardinals, Browns, Colts, Eagles and 49ers began their OTAs last week and 26 teams begin theirs this week. The Rams start their OTAs on May 31. Rookies have had their orientation at rookie […]

Ezekiel Elliott just signed his rookie contract with the Dallas Cowboys and got paid big. The deal is reportedly worth $24.9 million, according to Todd Archer of ESPN.com, and includes a signing bonus of $16.3 million. We’ve all seen when athletes get rewarded with big contracts, their friends come calling. Everyone wants a piece of […] The Dallas Cowboys are all-in on Ezekiel Elliott’s crop tops fashion statement. According to Newy Scruggs of NBCDFW.com, who spoke with Cowboys Merchandising Limited president Bill Priakos, the Cowboys will make sure to capitalize on the rookie running back’s sense of style by offering their own crop top: He also told me Elliott’s jersey sales […] The Dallas Cowboys are still holding out hope that second-round linebacker Jaylon Smith can play at some point during the 2016 season. According to Charean Williams of the Fort Worth Star-Telegram, Cowboys owner Jerry Jones—who hasn’t ruled out Smith returning to play in 2016—does not plan on placing Smith on season-ending injured reserve. The Cowboys will […] The 2016 NFL draft has been over for less than 72 hours, but a clear favorite has already emerged for the top pick in the 2017 draft. That player is Clemson quarterback Deshaun Watson. A quick search for 2017 mock drafts has Watson dominating the top spot, often going to the Cleveland Browns at No. […] The deadline for NFL teams to use the fifth-year option on 2013 first-round picks was late on Monday night. Here is a look at the 32 players from the first round who had their option picked up or declined: 1. OT Eric Fisher, Kansas City Chiefs: Option picked up 2. OT Luke Joeckel, Jacksonville Jaguars: […] Every team theoretically improves during the NFL draft. The league’s present and future is built on all 32 teams using the draft to build up rosters and find the next generation of stars. But not all improvement is made equal. Here are six teams that improved the most during the 2016 NFL draft: Jacksonville Jaguars […] 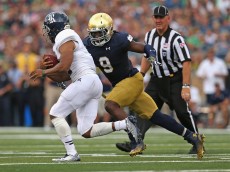 The Dallas Cowboys are prepared to play the waiting game on Jaylon Smith, the vastly talented linebacker who fell to Dallas at No. 34 overall after he shredded his right knee in his final collegiate game. According to ESPN, Cowboys owner Jerry Jones said his team is “ready to take the pain for the gain on […]