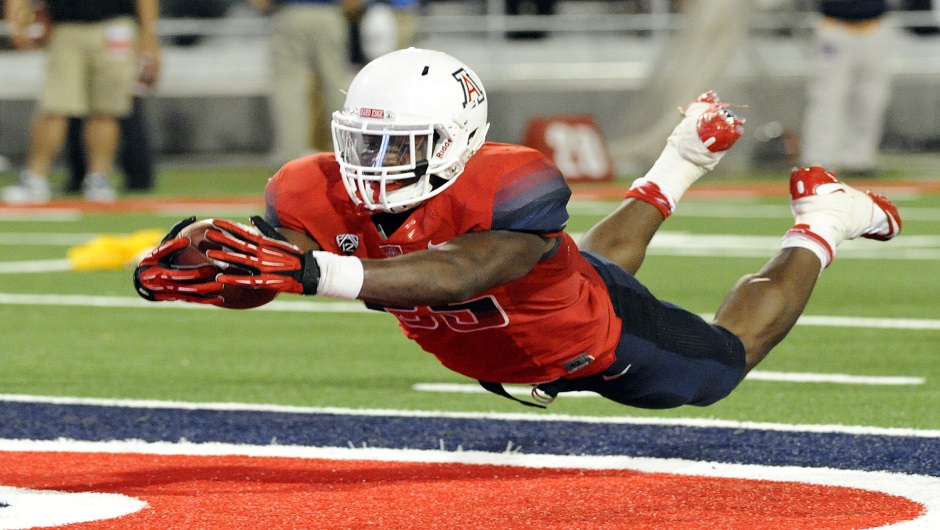 The 2014 NFL draft is almost here. Fantasy football owners, meanwhile, are just starting to begin to prepare for their drafts.

A lot of the players who will hear their names called at Radio City Music Hall will also get the box next to their names checked on millions of laptops during fantasy football drafts in August.

You don’t have to be a scout to recognize fantasy football talent. You don’t have to evaluate a player’s motor or pad level. It’s all about production. And putting up big individual numbers.

Just as this year’s NFL draft is deep with wide receivers, the position dominates the 2014 fantasy rookie pool.

It wouldn’t be surprising if Watkins is the most drafted rookie in fantasy football. He caught 101 passes in 2013, many of them on quick outs over the middle. He could catch a lot of those safe passes and be productive in a points-per-reception league. Watkins is likely to be taken in the top five in the NFL draft. The Jacksonville Jaguars pick at No. 3, the Cleveland Browns pick at No. 4 and the Oakland Raiders pick at No. 5. So there’s a good chance Watkins goes to a team that frequently has to throw the ball to come from behind. Watkins led the ACC with 1,464 receiving yards in 2013 with Tajh Boyd throwing to him. He’ll probably benefit from having a better quarterback targeting him in the NFL.

Beckham is a close second behind Watkins on the list of incoming rookie receivers who can make fantasy impacts. His 57 receptions is nothing special, but he averaged 19.6 yards per catch and can provide fantasy points as a kickoff and punt returner. Beckham led the SEC with 806 kickoff return yards last season and returned two for touchdowns in 2012. Beckham is projected to go somewhere in the middle of the first round. If the Pittsburgh Steelers take him at No. 15, he’ll be high on fantasy boards with Ben Roethlisberger throwing to him and the Steelers needing a second receiver behind Antonio Brown. Beckham might not be as valuable going to the New York Jets at 18. Eric Decker will get a lot of touches there. But if he falls to the Philadelphia Eagles at 22, he could put up dizzying fantasy numbers in Chip Kelly’s high-flying offense.

At 6’4 3/4″, Evans is an inviting red zone target who can rack up fantasy points with touchdown catches. He can also gain yards after the catch. One of his 12 touchdown receptions in 2013 went for 95 yards and he averaged more than 20 yards per reception. Evans probably won’t have Johnny Manziel throwing to him anymore. It’s not out of the realm of possibility, however, that a team swings a deal and drafts both Evans and Manziel. If that happens, Evans would be a hot fantasy prospect because he wouldn’t have to adjust to a new quarterback. But those chances are remote, and on the flip side of the coin a more classic pocket passer could make Evans a feared receiver at the next level.

Numbers matter more than the tape in fantasy football, and Cooks’ stats are just as eye-popping as his tape. He led the NCAA with 1,730 receiving yards and was second with 128 receptions and 16 touchdowns in 2013. Those numbers, combined with his 4.33 speed in the 40-yard dash (second overall at the NFL Scouting Combine), make Cooks a deadly fantasy receiver. If Nick Foles is throwing to him in Philadelphia, he could help fill the void left by DeSean Jackson. His numbers probably wouldn’t be so gaudy if the Eagles pass on him and the more conservative Kansas City Chiefs picked him up at 23. The Carolina Panthers at 28 are thin at receiver. There are a lot of touches to be had there.

Robinson has led the Big Ten in both receptions and receiving yards in each of the last two seasons. He caught 77 balls for 1,018 yards in 2012, and 97 passes for 1,432 yards in 2013. His touchdown numbers are ordinary. He scored six last season and 11 the season before. However, Robinson has a knack for making difficult catches and can make things happen after the catch. Robinson doesn’t compare to Evans as a red zone target, but his 6’3″ height is slowly becoming a benchmark for receivers in the NFL. Eight of the league’s top 10 in receiving yards last season stood at least 6’3″.

Another 6’3″ receiver, Matthews is the top-rated senior among this year’s prospects at the position in the NFL draft. That maturity, as well as his steady growth over four seasons, makes him a safe Day 2 draft pick for NFL teams and a solid late-round value in fantasy drafts. Matthews is the SEC record holder with 262 receptions and 3,759 receiving yards. He led the conference in receptions (112) and receiving yards (1,477) in 2013. Matthews isn’t a home-run threat. He’s never scored more than eight touchdowns in a season. But he’s consistent. The last time he caught less than five passes in a game came on Oct. 20, 2012.

NFL teams have been turning up their nose at running backs in the first round of drafts in recent years, but not fantasy owners. Players like Adrian Peterson, Jamaal Charles and LeSean McCoy are the first ones chosen in many fantasy drafts. Even if you can get one of those studs, there are some RB2 and flex candidates in the 2014 draft, and Sankey is the most promising of the bunch. He’s an all-purpose back who can ring up fantasy points in a variety of ways. He led the Pac-12 with 2,174 yards from scrimmage in 2013. That includes 1,874 rushing yards at a clip of 5.7 yards per carry with 20 touchdowns. He also caught 28 passes last year and has 59 receptions over the past two seasons. Sankey’s productivity running and receiving makes him an ideal flex option.

Even though they came at the Football Championship Subdivision level, West’s numbers are impossible for fantasy owners to ignore. He tied the FCS record with 84 career rushing touchdowns, sharing the mark with Adrian Peterson (the former Bear, not the current Viking), according to NFL.com. West did it in three years, however, while Peterson took four years to do it. West also set single-season FCS records in 2013 with 2,519 rushing yards and 42 touchdowns. He also can provide that pass-catching dimension, hauling in 26 balls last season. The CAA Offensive Player of the Year, West led Towson to the FCS National Championship game. The 5’9″, 225-pounder “wears down defenses,” according to NFL Draft Scout. He can pile on yards and fantasy points late in games.

Carey has put together the most impressive two-year body of work among the Day 2 FBS running back prospects. He combined for 3,814 rushing yards and 42 touchdowns in 2012 and 2013, leading the NCAA with 1,929 rushing yards and 2,232 yards from scrimmage in 2012. The 5’9″, 207-pounder was second in the NCAA with 349 carries last season and led the NCAA with 375 plays from scrimmage. He’s a workhorse runner who caught 62 passes out of the backfield over the past two seasons. Carey has the stuff to step into a featured back role right away. He finished his collegiate career with 16 consecutive 100-yard rushing games, the longest current streak at the FBS level, according to the Chicago Tribune.