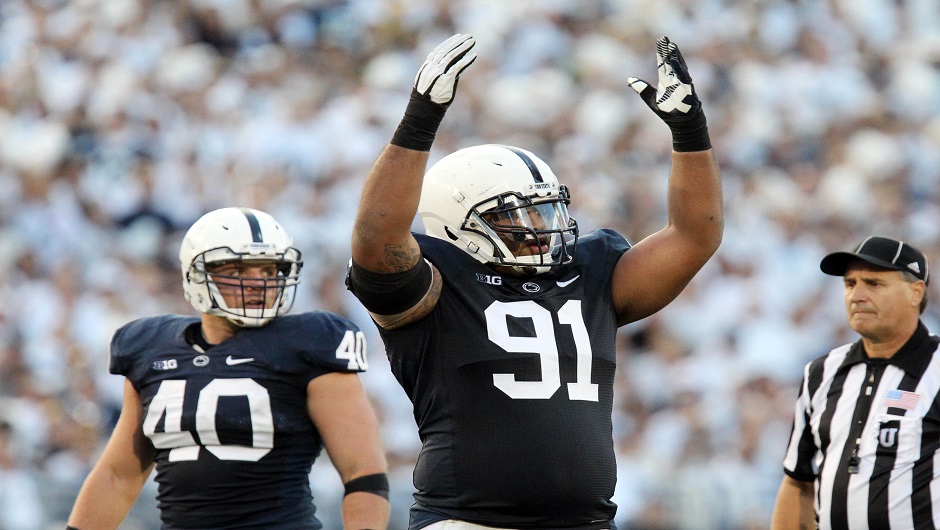 When scouting prospects, one must always look toward the future. It’s important to focus on where a prospect will be in three years—projecting the growth they will make and noting areas they can improve in. The first round has always featured the most prolific athletes who are expected to be immediate starters. The first 32 picks also contain prospects who are extremely raw, but offer high potential for the future.

While first-round players get all the attention, there is great value in the middle rounds. Every year there are multiple prospects drafted in rounds two through five that end up starting as rookies. These are players who fall because they don’t offer the same upside or athleticism as prominent prospects, but can start because their skills immediately translate to the NFL..

Bridgewater entered the offseason as the consensus top quarterback on draft analysts’ boards. After a strong final season at Louisville, Bridgewater was posed to be a top-five selection. Then things suddenly changed on March 17—Bridgewater threw without gloves for the first time in years and his passes were off the mark. It was a weak showing for Bridgewater, in an event where many quarterbacks usually leave the building buzzing. Suddenly, draft pundits were pushing Bridgewater down their boards and there were countless “leaks” about how little NFL executives thought of him.

Pro Days are a part of scouting, but it’s just a slice of the yearlong process and should never surpass the importance of what a prospect shows on film. When watching Bridgewater on film, several positives stick out. At Louisville he showed leadership in the huddle, the ability to read the defense and also to make adjustments before the snap. After the snap, Bridgewater showed excellent poise reading pressure and putting it only where his wide receiver can get it. His poise and awareness is beyond his peers and he has experience in a pro-style offense. It’s possible Bridgewater slips to the second round, but there will be plenty of teams in need of his services. He can start immediately for many teams and can help turn a franchise around.

Offensive linemen rarely get attention during the draft process—unless looking at a premier left tackle. Interior linemen aren’t often talked about, even when the draft class is strong, like this year. The 2014 class is loaded with talent at offensive guard and center, with plenty of names who can compete for starting jobs as rookies.

One of the standouts from this year’s class is Martin—who could hear his name called on Day Two as one of the first centers off the board. Several playoff teams like the New Orleans Saints, Green Bay Packers and Baltimore Ravens are all in need of a center and Martin would immediately help protect the quarterback. Martin impresses with his athleticism and strength in pass-protection, displaying his ability to anchor down and hold his ground. He also offers the versatility to play either guard or center, something teams like the Packers and New England Patriots love. He would be one of the youngest starters at the age of 20, but has plenty of experience at multiple positions and is a quick learner.

Thanks to Jimmy Graham and Rob Gronkowski, NFL teams are looking for more athletic tight ends that excel in their receiving ability. This helps players like Eric Ebron and Jace Amaro to be pushed up the boards into the top-20, while traditional tight ends fall into the middle rounds. While Fiedorowicz’s production and skill set may not match up to the premiere names in this class, he should see the field right away due to his balanced play.

Fiedorowicz’s numbers from last season won’t stand out—30 receptions and just 299 yards leaves a lot to be desired when comparing him to the rest of the tight ends. Fiedorowicz’s play goes beyond the box score—he played in an offense that leaned on his blocking skills and ranked 93rd in the country in passing yards. Fiedorowicz delivered as an in-line blocker, using his size and strength well to hold his blocks. When he was called upon in the passing game, Fiedorowicz showed strong hands and used his strength to run defenders over in the open field. His ability to contribute as a receiver and blocker will draw the attention of several playoff teams in need of a tight end, including the Packers and Patriots. They can sit patiently as he falls to them in the fourth round, then they could grab him which could make him a major contributor as a rookie.

The NFL has quickly turned into a passing league and that has provided plenty of opportunities for more wide receivers to step into the spotlight and shine. It’s also opened the door for dozens of college wide receivers to enter the draft early and has made this year’s class one of the deepest ever at wide receiver. A deep class pushes prospects that in previous years would have been second round selections into the third and fourth rounds.

Landry isn’t even the best wide receiver coming out of LSU—Odell Beckham Jr. is the standout Tiger and should end up a top-20 selection. This isn’t a slight on Landry, but his draft stock has slipped during the offseason. Landry suffered a hamstring injury during his 40-yard dash at the scouting combine—he finished with a 4.77 40, worst of all the wide receivers who participated. Suddenly he was falling down draft boards and when scouts showed up to his Pro Day, they left unimpressed by a 4.6 40 and multiple drops.

When scouts go back to the film room and watch Landry, they will see why it’s important to not read too much into workouts. Landry does his best work in games—he beats cornerbacks with crisp routes to create separation, then wins contested catches with his size and awareness. He has some of the most reliable hands in the draft and the toughness to fight through traffic and take big hits across the middle. For teams like the Carolina Panthers and New York Jets, he can step in immediately and become one of the top wide receivers.

Alabama has a great tradition of producing great NFL prospects—they’ve done it again this year with Mosley and safety Ha’Sean Clinton-Dix. Mosley was the leader of the Crimson Tide’s defense and made his impact felt with 108 tackles last season. He is the top inside linebacker in this class and if his shoulder checks out, can be a top-15 pick on draft day.

While Mosley impresses with his size and speed, what really makes him stand out are his instincts and coverage ability. Mosley has a nose for the football and knows how to track down the ball carrier. He impresses in coverage where he can match up with tight ends thanks to his speed and instincts. He was red-flagged originally for concerns about his shoulder. But even with that, Mosley is still the top player at his position and an elite talent. Mosley can instantly start in a 3-4 or 4-3 defense and compete for Defensive Rookie of the Year.

The importance of having great safeties has grown in recent years, thanks in part to the Seattle Seahawks’ Legion of Boom. Now, prospects are seeing their draft value elevate because of it. The Seahawks won Super Bowl XLVIII for several reasons, but safety play is what stood out most during their playoff run. Earl Thomas was sensational in coverage, while Kam Chancellor brought a hard-hitting presence in the middle of the field.

While Brooks is undersized at 5’11’ and 198 pounds, he stands out with his coverage and ball skills. The former cornerback impresses in coverage in part because of his speed and instincts. He shows great awareness for tracking the football and has the aggressiveness to fight for the interception. He matches up well with quick, slot receivers because of his straight-line speed and fluid hips. Brooks also came down as a linebacker for the Seminoles last season—his presence felt in the running game where he could get to the line of scrimmage quickly and take out the running back.

Brooks will likely last until the late-second or early-third rounds due to his size, but will provide tremendous value for teams in need of safety help. He fits perfectly for a team like the Packers, Philadelphia Eagles or Detroit Lions. All three teams are in need of a safety that can play multiple roles in their defense, but more importantly can be trusted in coverage. Brooks should see immediate playing time as a rookie and have a great chance to start early on.

While USC may have had a disappointing season, they had plenty of interesting prospects to keep an eye on this year on both sides of the ball. Bailey didn’t receive much attention early in the season, but a standout performance in the Las Vegas Bowl ended his Trojans’ career on a high note and showed what he can bring to an NFL team.

Bailey’s career with Southern California was a roller coaster ride—feeling the results of sanctions stemming from the Lane Kiffin era, and being moved around throughout his career. Bailey spent time at both outside linebacker and safety, displaying his speed in coverage and vision as a linebacker.  Bailey is an extremely smart player, taking great angles and wrapping up the ball carrier. He diagnoses plays well and his speed allows him to react quickly to the ball versus the run and in coverage. He also proved to be a turnover machine at USC, finishing with 11 interceptions in his career.

The ability to move around is vital to seeing the field early as a rookie—Bailey’s familiarity with multiple defenses and athleticism will also help him impress the coaches in training camp. Bailey missed just one game in college due to injury, displaying his durability and commitment to staying on the field. Bailey won’t hear his name called until round three, but will prove to be a draft steal when looking back a year from now.

This year’s draft class has a range of defensive line prospects—varying from superior athletes like Jadeveon Clowney to monsters like Daniel McCullers. No matter what defense you run, you are sure to find at least one defensive lineman who is perfect for your scheme.

While there are plenty of flexible defensive linemen in this class, there is great value in the later rounds. Jones is likely a fourth round prospect. Standing at 6’4 and 322 pounds with a basketball background, there is too much talent to pass on at that point. Jones spent four seasons at Penn State. And when his team needed big plays, he was one of the most dominant players to step up and do just that. Jones impresses with interior pressure and does a nice job plugging up running lanes. He can start as a 4-3 defensive tackle or 3-4 defensive end.

Jones should see the field immediately upon being drafted. Players with his size, strength and ability to fight off blocks get snaps early in their careers. The big question for Jones will be his consistency and ability to show the same explosiveness on every play. When his motor is running, Jones opens up lanes for linebackers and opens up single blocks for other defensive linemen. His strength and movement ability will help him against NFL linemen and will likely have him on the field in his rookie season.