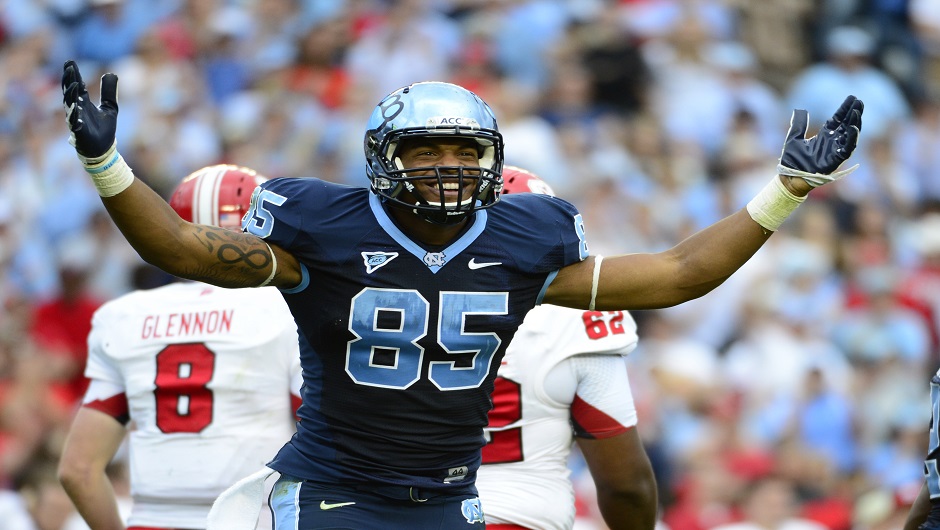 Only three days remain until the 2014 NFL Draft is slated to kick off, but there is still much uncertainty as to how it will all play out. Players like Teddy Bridgewater are watching their stocks dwindle, while rapid-risers like Tom Savage are (somehow) shooting up draft boards. There is no telling exactly how teams value each prospect relative to the media’s perception of their worth.

Let’s take a look at how the first three rounds are shaping up. This will be our final mock draft until the big day.

The 2014 draft class is one of the deepest of all-time. There’s plenty of talent available on both sides of the ball. So expect plenty of crazyness and uncertainty come Thursday evening. Here’s our best stab at how it’ll all play out:

With so much uncertainty surrounding the quarterbacks, the safe play for the Texans is to take the best player available. Despite his overblown character concerns, Clowney is a once-in-a-generation talent that any team will regret passing up.

With Jake Long recovering from an ACL injury, the Rams have a chance to solve their tackle position once and for all. Robinson has a lot of holes in his game but flashed dominance no offensive lineman is capable of matching in this class.

With one pick, the Jaguars give their franchise the much-needed injection of energy they have lacked for years. Manziel is the ultimate risk-reward would could be a dominant player if his skills translate to the NFL.

Watkins and Josh Gordon instantly give the Browns a wide receiver corps that few in the NFL could match. All they need now is a quarterback to bring it all together.

Arguably the safest pick in the draft, the Matthews is a plug-and-play starter from day one who will go a long way in rebuilding the trenches in Atlanta, even if he does not have the same upside as Greg Robinson.

Trading Mike Williams almost forces the Bucs to take a receiver here. Evans is the prototypical deep threat that can will give Josh McCown a pair of receiver that strongly resemble the group he had in Chicago.

Bridgewater’s stock appears to be in freefall after a disappointing month of workouts, but he is only a few months removed from being the unquestioned No. 1 quarterback in this class.

The Bills do have Scott Chandler in the fold, but they need more than a glorified receiver at the tight end position. Ebron is arguably the best tight end prospect since Vernon Davis and will give them a dynamic player the position that they have not had before.

The Lions have gone far too long without adding a first-round talent to the secondary. Gilbert can be a big over-aggressive but he will be an excellent fit in the Lions all-or-nothing style of defense.

The Titans will give Jake Locker at least one more year to prove he can be the franchise quarterback. Ha Ha Clinton-Dix can be their Cover 1 specialist that will allow their defense to be more aggressive.
12. New York Giants: Aaron Donald, DT, Pittsburgh

The Giants get a steal here with one the best defensive tackle prospect since Marcell Dareus, despite being a bit undersized.

With Cortland Finnegan no longer in the picture, the Rams need a man-to-man specialist who can lock down a side of the field. Dennard can be that guy.

Hageman is a bit raw and not quite as consistent as most scouts would prefer, but he has the tools to develop into the run-stuffer the Bears need in the middle of their defense.

Any team willing to overlook a recent arrest and a disappointing 2013 campaign may wind up getting the best cornerback in this class. Roby has elite movement skills and can instantly start for the Steelers.

Barr slides down the board further than most would anticipate. Here, he provides great value to the Cowboys who were decimated on the defensive line last year.

Even after locking down Eugene Monroe, the Ravens still have a massive hole at the opposite tackle position that was once occupied by Michael Oher.

Few teams need more help at the skill positions than the Jets. Beckham Jr. he would fit perfectly opposite Eric Decker as a receiver who can add an element of speed with polished route-running for whoever is playing quarterback this season.

The Dolphins need to completely re-vamp their offensive line both on and off the field. Bitino allows the to completely move on from the Jonathan Martin era.

Carson Palmer played relatively well last year, but the Cardinals need to start thinking about the future. A coach’s dream from the shoulders up, it remains to be seen whether or not Bortles can clean up his accuracy and overcome his average arm strength in the NFL.

21. Green Bay Packers: C.J. Mosley, LB, Alabama
Simply put, Mosley is the best player on the board. Mosley can play any linebacker position in any scheme, which is perfect for a Packers defense that will use more 4-3 looks next year.

Receiver becomes an even more pressing need after releasing DeSean Jackson. Injuries and turmoil at USC contributed to Lee’s disappointing 2013 campaign, but he can turn out to be a steal if he can return to his record-breaking 2012 form.

The Chiefs don’t have many holes on their roster, but giving Alex Smith an extra toy to play with may be their top need. Cooks is an undersized speedster who also has value as a return man.

The Bengals have been getting by with average safeties for too long. Pryor is a big-time hitter who will set a new tone for the Bengals’ secondary.

The Chargers have used their last few first-round picks to shore up the defensive and offensive fronts—it is time to give their secondary an infusion of young talent.

The Browns’ patience pays off, as they are able to get the quarterback they have been connected to for quite some time. Carr is a terrific competitor with as much arm talent as anyone in this draft class.

His senior season left a little to be desired because of nagging injuries, but Louis Nix could be a dominant player at the next level in the middle of the Saints’ defense if he can find a way to stay healthy.

The loss of Captain Munnerlyn in free agency cannot be ignored. Verrett has a ton of ability, but his size may limit him to the slot, which is perfect for the Panthers’ needs.

The Patriots don’t have many needs, but they have not had certainty at the tight end position since the Aaron Hernandez saga unwound. Amaro would be a perfect complement to Rob Gronkowski, who is coming off an ACL injury.

As Aldon Smith continues to find himself on the wrong side of the law, the 49ers must prepare for life without their stud pass-rusher. Ealy provides great value at this point in the draft.

The Broncos are starting to age along the offensive line, and should spare no expense to keep Peyton Manning upright as often as possible. Su’a Filo is a great fit as a zone blocker in the Broncos’ scheme.

The defending champs don’t need much, but a protypical two-way tight end could make them impossible to defend. There are some character concerns regarding Seferian-Jenkins’ blocking effort, but he has too much natural ability to pass up at this point.