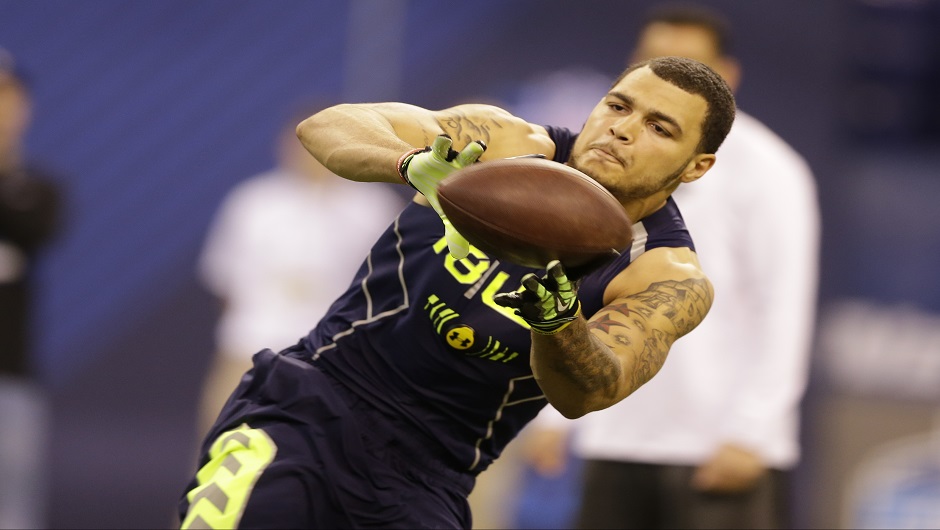 The 2014 NFL Scouting Combine kicked off in Indianapolis over the weekend as a number of draft hopefuls aimed to show off their skills in front of scouts, general managers and coaches. Some players did what they had to do, improving their draft stocks, while others struggled in drills and could be moving down draft boards in the coming weeks. The following players either used the Combine to their advantage, or struggled mightily.

Known mostly for his arm strength on film,  Carr came into Indianapolis and wowed a lot of scouts with some stellar numbers. His 40 yard dash time was almost identical to that of Johnny Manziel and the signal caller also showcased some serious athleticism with a 34.5” vertical jump (second among quarterbacks) and a broad jump of 110” that just missed the Top 5 in his position group. Carr’s impressive showing in the vertical jump and broad jump proves that he’s an explosive athlete who has a strong enough base in his lower half to both bounce off of pass rushers and extend plays as well as drive the ball down the field.

Without question, Derek Carr is the most impressive person I’ve talked to this week. Everyone raves about him for a reason.

One of the most dynamic rushers in all of college football last season, Mason solidified his draft stock in Indianapolis with great performances in multiple drills. Most impressive was Mason’s 40 yard dash time; running a 4.50 proved that this rusher has the breakaway speed to be a home run threat in the NFL every time he gets the ball in space. Mason also finished third among running backs in the vertical jump and fourth in the broad jump, establishing how powerful this former Tiger’s base is. He can punish defenders with a low center of gravity and utilize his thick trunk at the next level.

A receiver of Mike Evans’ size is going to draw attention either way, but the former Aggie’s numbers at the Combine put him in a class of his own. Checking in at just under 6’5” tall and around 230 pounds, Evans ran a 4.53 40 yard dash and displayed great hands and adjustment skills in positional drills. Evans backed up his tremendous film with prolific numbers and his 4.53 40 yard dash proves that his torching of SEC cornerbacks in man coverage on vertical routes was no fluke. I would have liked to have seen a better vertical jump, as he only recorded 37”, but Evans’ performance was positive overall.

OL Taylor Lewan, Michigan I typically don’t pay much attention to the time that offensive linemen post in the 40 yard dash, but rather how they look running the sprint. While Lewan’s 4.87 40 yard dash was second among all offensive linemen, it was the way that the tackle ran that made him a winner. He looked especially light on his feet, which is a must-have trait for a blind side protector. The former Wolverine showed scouts how explosive of an athlete he is by finishing first in his positional group in the broad jump and third in the vertical jump. Lewan was also smooth in positional drills, proving his worth as a potential NFL left tackle as he shoots up draft boards.

While he didn’t have too much to gain from throwing at the Combine, Teddy Bridgewater surprised many by electing not to run. The former Louisville signal caller put on 20 pounds, quelling concerns about his small frame. That said, considering he didn’t run a 40 yard dash, Bridgewater hasn’t proven that the weight he put on was good. With Blake Bortles and Derek Carr having great days and Johnny Manziel doing what he was supposed to do, Bridgewater may have lost his footing as the top quarterback in the draft after he decided not to participate in most of the drills.

Just caught up with Tajh Boyd and asked him what he thought about Bridgewater not throwing/ running. “I thought we were here to compete.”

A player who was once being talked about as a first round pick, Jarvis Landry came into the Combine looking slow and unathletic. Scouts typically cross-check a player’s workout numbers with his film and, for Landry, these poor numbers don’t add up. The rest of the wide receivers, for the most part, did rather well in Indianapolis and Landry could slide down draft boards after a poor day. He put up a 4.77 40 yard dash time, which was worst among the wide receiver group, and his vertical jump of 28.5” was second-worst in the wideout’s positional group. Landry would have been better off faking an injury and not participating in the Combine; he’s going to lose his footing as one of the draft’s better wide receivers.

With Eric Ebron and Jace Amaro both doing what they needed to do to cement their status as the top two tight ends in the draft, Austin Seferian-Jenkins could have come out and competed for first round status with great numbers. He wasn’t able to do that, as he wasn’t medically cleared due to a foot injury. While he’ll get a chance to work out down the line, the Scouting Combine is more of a competitive atmosphere and it’s always fun to see players go head to head in Indianapolis. Such is something Seferian-Jenkins didn’t do, which was disappointing.

OL Cyrus Kouandjio, Alabama The film may end up speaking for itself with Cyrus Kouandjio, but there’s no getting past some of the numbers that the former Alabama offensive lineman posted. Kouandjio was by far the slowest player in his positional group, running the 40 yard dash in 5.59 seconds and looking very heavy as he competed in the drill. The Crimson Tide product also did poorly on the bench press, posting 21 repetitions of 225 pounds and finishing second-worst among offensive linemen. He didn’t prove that he’s strong or fast, which will work against him when teams are trying to decide whether or not he’s worthy of a first round pick. Also, the offensive lineman reportedly failed the Combine physical due to an arthritic knee, which will worry some ballclubs.