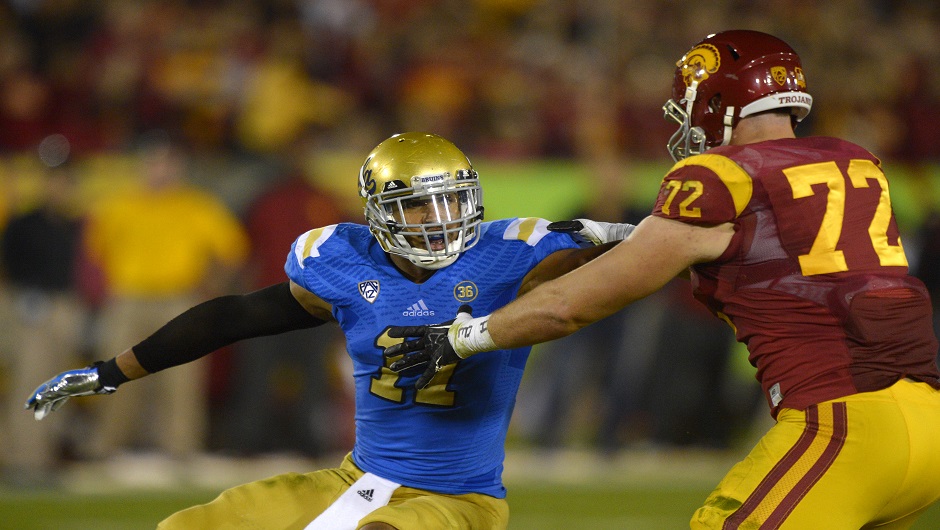 Edge rusher Anthony Barr is an intriguing draft prospect who is generating a ton of buzz. While the linebacker is extremely athletic, he lacks discipline and could be a liability on certain downs.

He is, however, a talented defender in some aspects and will be worthy of consideration for a number of teams on draft day.

I recently graded him out as just the 21st-best player in this year’s class on my Big Board (which you can check out here). Let’s take a look at how he measures up:

The first thing that jumps out about Barr is his insane level of athleticism. Barr ran in the 4.6’s at the Scouting Combine, but he is much faster on film. The defender gets by offensive tackles with relative ease, using his elite speed off the edge to beat opposing linemen off the ball. His lateral quickness makes up for a poor first step.

As quick and athletic as Barr is, he’s also strong. Though he tends to get caught up with offensive linemen in the run game, the former Bruin holds his ground well and controls blockers. At his current weight, he can hang with NFL linemen, but don’t be surprised if a club makes him put on extra pounds to become a more physical force.

Physical attributes are great, but what keeps scouts coming back to Barr is the linebacker’s penchant for making big plays. The pass rusher has a number of highlight reel plays on film in which he destroys quarterbacks, rips for the football and forces turnovers. Hisknack for game-changing plays will impress scouts and coaches alike.

There are a number of reasons why I dislike Barr, though.

The former UCLA standout lacks experience at his position. He’s only played on defense for two years. While experimenting with Barr on the other side of the ball worked in college, there’s no way to tell for sure that the ex-Bruin can play the position at the NFL level. He has a lot of learning to do before he can fully execute a complicated defensive scheme.

Barr has poor instincts, which makes it hard for me to see him contributing much in the short term. While Ziggy Ansah had limited experience last year, his instincts (at least in the run game) were impressive. Barr doesn’t inspire the same amount of confidence and, as an outside linebacker, he can get abused by a creative offensive playcaller.

The most troubling part about watching Barr on film is that he disappears for long stretches of time. This isn’t a knock on his motor. In fact, Barr’s motor is rather solid. The problem is that the defender struggles to make a consistent impact on the game and doesn’t defend his gap well. He’ll make one or two huge plays but do almost nothing the rest of the game.

If I were a general manager, I’d stay away from Barr in the first round. He’s the kind of player who will get overdrafted by virtue of his jaw-dropping athleticism.

In terms of a player comparison, Barr is very similar to former Bills LB Aaron Maybin. As much of a ‘bust’ as Maybin was, the athletic linebacker ended up a productive pass rusher in his last few seasons. With proper coaching and reasonable expectations (two conditions that are easier said than done), Barr could develop into an efficient defender.

Barr will likely be a first round pick. But I don’t see him as a player capable of contributing much in his first season. He’d be a good fit on a team that has solid edge players already, like the Chiefs, where he can earn playing time as a situational pass rusher.