San Francisco 49ers quarterback Colin Kaepernick didn’t exactly receive a warm welcome in his first game back starting under center since Nov. 1 of last year. Bills fans showered him with boos as he took the field to start the game, which is what you’d have expected. It’s a tough situation for Kap and the […] That was fast. The Houston Texans aren’t off to the hottest of starts this season after spending big cash on guys such as quarterback Brock Osweiler and running back Lamar Miller. Tensions have already seemed to hit notable point between Osweiler and coach Bill O’Brien. According to a note by CBS Sports’ Jason La Canfora, […]

The San Francisco 49ers visit the Buffalo Bills in Week 6, where the visitors will start the polarizing Colin Kaepernick under center after weeks of ineffective play from Blaine Gabbert. Certain fans in Buffalo decided a good way to voice their displeasure over Kaepernick’s national anthem protests was through images on shirts. The images on […] The Dallas Cowboys don’t see a reason to rush into a decision when it comes to the debate concerning Tony Romo and Dak Prescott. Prescott has played quite well during Romo’s absence and unexpectedly has the team rolling, causing some to suggest he should keep the job no matter when Romo returns. Per NFL Network’s […] Running back DeMarco Murray was traded from the Philadelphia Eagles to the Tennessee Titans this past offseason. But did you know Murray was almost traded back to the Dallas Cowboys? According to Charean Williams of the Fort Worth Star-Telegram, a reunion with Murray and the Cowboys was “close,”, but the Eagles preferred to trade Murray to […] For a player who has been the best at his position for almost the entirety of his career, Joe Thomas deserves better than the Cleveland Browns, and yet the All-Pro left tackle will not ask to be traded at the Nov. 1 deadline, a source tells ESPN.com’s Pat McManamon. Thomas reportedly wants to stay with the […] 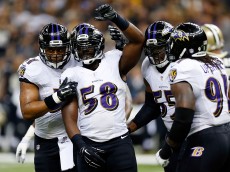 Elvis Dumervil’s return has coincided with the Ravens’ two-game losing streak after a 3-0 start. Not that Dumervil is to blame, but according to Pro Football Talk he’s been ruled out for Sunday’s game against the Giants and will be out indefinitely as he tries to regain his form. Dumervil, 32, had offseason foot surgery […] It will take more than just a lingering ankle injury to turn off the NFL on LSU running back Leonard Fournette. According to Matt Miller of Bleacher Report, the league is still in love with the idea of Fournette as a first-round talent in the 2017 NFL draft. “No,” one NFL general manager said after being […] One week after honoring Muhammad Ali with his cleats and having the NFL force him to take them off, Pittsburgh Steelers wide receiver Antonio Brown will wear custom cleats to pay homage to Jose Fernandez and Kimbo Slice. Brown shared the epic designs on Twitter: Amazing. Slice died at the age of 42 earlier this […] Detroit Lions defensive end Kerry Hyder isn’t a household name by any means. Still, one would think he’d be one of the 54 defensive ends on the Pro Bowl ballot considering he leads the league in sacks at five while filling in for starter Ziggy Ansah. Nope. An undrafted free agent in 2014, Hyder isn’t […] There are a lot of opinions flowing back and forth regarding whether or not Cowboys quarterback Tony Romo should get his starting job back when he’s healthy. A pretty significant voice has chimed in. Hall of Famer Roger Staubach, who led the Cowboys to victories in Super Bowl VI and Super Bowl XII, said that […] Jim Nantz is the latest victim of the hot mic. Apparently Nantz got caught on camera last month talking about the national anthem protests so widespread in the NFL right now. To summarize, he suggests the protests might die out if the cameras don’t pay it any mind. DeadSpin has the video: Not a good […] Predicting NFL games is difficult. The only guarantee is that there will be at least one upset just about every week. In Week 6, however, five teams are above the fray. These teams have underdog immunity and are locks to put one in the win column. Steelers (4-1) at Dolphins (1-4) The Steelers are the […] Hall of Fame QB Steve Young has been back-and-forth on the 49ers quarterback situation, as he seemed to favor Blaine Gabbert over Colin Kaepernick from the beginning. He’s now come out and said he wasn’t necessarily against making the move, but that the team’s timing was off and that they made it too late. “It’s […] Philip Rivers is closing in another San Diego Chargers passing record. The 34-year-old quarterback needs 125 yards to pass Hall of Famer Dan Fouts for most all-time by a Charger. Rivers could set the record on Thursday night against the Denver Broncos. A first-round pick in 2004, Rivers has been the face of the Chargers […] After Calvin Johnson retired at the end of last season, the thought was Matthew Stafford would struggle this season without one of the best receivers in NFL history, but the Detroit Lions quarterback hasn’t missed a beat. Lions offensive coordinator Jim Bob Cooter says Stafford may be even better without Johnson. “I think he’s a […] It seemed like a big deal—the Miami Dolphins signed Mario Williams over the offseason to put him on the same line as Ndamukong Suh. No dice. Williams has been ineffective at best, totaling seven tackles and a sack through five games and helping the team to a 1-4 record. Dolphins defensive coordinator Vance Joseph wasn’t […] The Denver Broncos’ NFL record for consecutive road wins inside the division will be put on the line tonight against the San Diego Chargers. According to ESPN’s Adam Schefter, the Broncos haven’t lost on the road to an AFC West opponent since 2010, a record span of 15 games. Denver owns longest road divisional win […] Time was just about to run out on Sam Wyche. The former Bengals and Buccaneers coach was waiting for a heart transplant on Sept. 12 and down to his last day at Carolinas Medical Center. There was no heart available. Wyche’s son is an assistant coach for a high school team in Cincinnati and his grandson plays […] Joe Flacco took responsibility for the Ravens’ offensive struggles on Wednesday, but in general the Ravens stood behind the firing of offensive coordinator Marc Trestman. On a personal level they were sorry to see Trestman go, but they knew a change was needed. “We were in kind of a bad place,” tight end Dennis Pitta told The […] Dez Bryant shook out the cobwebs Wednesday, practicing for the first time since he hurt his knee Sept. 25. The Cowboys receiver practiced on a limited basis, but told the Fort Worth Star-Telegram that he needed to get out there even if he doesn’t play Sunday at Green Bay. There is a chance he plays […] Mike McCarthy is getting tired of the relentless questions about his Green Bay Packers offense. “You know, we had 400 yards of offense (against the New York Giants), so I don’t know why the hell I’ve got to come in here and answer questions about the things you think that went wrong,” McCarthy said Wednesday, according […]