The Boston Red Sox will honored one of its most legendary members by naming a bridge after David Ortiz in the Fenway neighborhood. Boston revealed the Big Papi Bridge on Twitter in one portion of a farewell note to the legend: . The Pittsburgh Pirates might get ahead of the curve and deal star outfielder Andrew McCutchen this offseason. Pittsburgh, third in the National League Central and well under .500 while the Chicago Cubs sit on more than 100 wins, only have so long before McCutchen can up and leave the franchise. Rob Biertempfel of TribLive.com noted the team […] 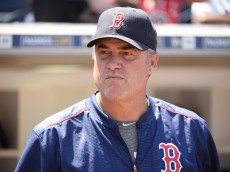 Red Sox manager John Farrell delivered the perfect retort in response to a heckling fan who questioned his decision making during the team’s most recent game against the New York Yankees. The fan questioned Farrell’s lineup, and wondered why there weren’t as many of the team’s normal starters out there, especially with how close the […] Want to see the Chicago Cubs play in the World Series? Get ready to cough up $2,000. Oh, and get ready to stand the whole game. ESPN’s Wayne Drehs broke some alarming news about hypothetical Cubs tickets: For the optimistic Cubs fan (does that exist?) World Series tickets on StubHub start at $2,000. For standing […] Much has changed since April 1950. Color television was invented, the Berlin Wall went up and came down, and the United States has seen 12 different presidents. Vin Scully, however, remained a constant. But on Sunday, the ever-present and everlasting voice of the Dodgers will call it a career after 67 incredible seasons behind the mic. Scully has witnessed […] Boston Red Sox slugger David Ortiz hit many clutch home runs to burn the New York Yankees over the years, and it’s probably a big relief for them that he’s set to retire when the season ends. Ortiz played in his final game in New York on Thursday night, and went 0-for-1 at the plate […] The Seattle Mariners love their rookies, but boy do they take hazing to the next level. In the social-media world, the last thing a rookie wants to do is get caught doing something silly. The Mariners didn’t give them much of a choice, though, not with getups like this: Rookie Day pic.twitter.com/UiL0ZFklKz — Edwin Diaz […] 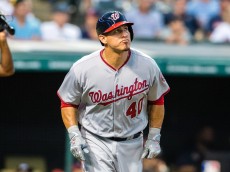 If the Washington Nationals are going to go deep in the playoffs, they’ll have to do it without All-Star catcher Wilson Ramos. Nationals manager Dusty Baker Monday’s Presidential Debate may have set the political world abuzz, but the question over who should who should win the American League Rookie of the Year is also generating a fervent discussion. There’s no need to fact check the legitimacy of the Yankees’ Gary Sanchez or the Tigers’ Michael Fulmer. Their respective numbers clearly state strong […] 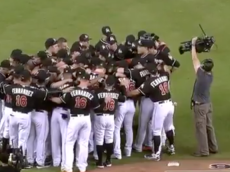 The Marlins held a tribute on the mound before Monday’s matchup against the Mets to honor Jose Fernandez, who was tragically killed in a boating accident, and that energy carried over into the game. Dee Gordon led off for the Marlins, and with a 2-0 count, he took a Bartolo Colon pitch and blasted it […] The Los Angeles Dodgers, fittingly, treated Vin Scully to a thrilling walk-off win over the Rockies in Sunday night’s game, which was the final one he’ll call from Dodger Stadium. Scully will retire at the end of the regular season, after spending 67 years with the organization, and with the Dodgers closing out the season […] The respective battles for the final two MLB playoff spots in each league are living up to their descriptor. With roughly a week of regular-season play remaining, both the AL and NL races have the potential to go down to the wire and feature plenty of unpredictable moments–and we’ve seen a lot already. The Mets […] With David Ortiz playing the final game of his career at Camden Yards on Thursday, the Baltimore Orioles thought it funny to gift the Boston Red Sox slugger with the dugout phone he smashed in a game on July 27, 2013. The Orioles’ Adam Jones presented Ortiz with the phone in a special ceremony prior to the […]

The St. Louis Cardinals found themselves in another anthem standoff, as Jose Martinez took on Carlos Estevez of the Colorado Rockies in a battle of wills prior to the start of Wednesday’s game. Neither man wanted to give in after the playing of the national anthem, but Martinez was able to outlast Estevez when umpires ordered […] 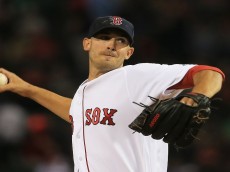 With summer drawing to a close and the weather beginning to get a bit cooler, we’re nearing the point of the MLB season where elite starting pitchers really show their worth. We took a look at the best in both the American and National Leagues, and ranked them by chance of winning the coveted Cy […] There’s no love lost between the Los Angeles Dodgers and San Francisco Giants, so it really wasn’t a surprise when benches cleared during the teams’ most recent meeting on Monday night. It happened when Madison Bumgarner got Yasiel Puig to ground out to end the seventh inning. The Giants pitcher probably rubbed it in a […] Tebowmania has touched down the MLB. Tim Tebow reported to the New York Mets Monday, joining the Port St. Lucie in an effort to start his baseball career. Of course, one of the first things people noticed was Tebow’s new jersey, which still rocks a familiar number: The new must have item in Mets fashion. The day after the Chicago Cubs clinched the NL Central, several members of the front office watched Friday’s game against the Milwaukee Brewers from the bleachers at Wrigley Field, including President Theo Epstein and GM Jed Hoyer. Donning a fake mustache and ball cap, Epstein tried to disguise his identity but was unsuccessful as multiple people […] By late July, all signs suggested a term that’s quite foreign to the regal Yankee franchise: rebuilding. But the evidence of such an act became quite clear as the trade deadline neared. Despite being around the .500 mark, the front office brass in the Bronx decided it was time to part ways with veteran players in lieu of prospects. […] Nearly every MLB player enters a new season in hopes of winning a World Series ring. However, as far as individual achievements go, none are more revered than the coveted Most Valuable Player award. With less than one month of regular-season play remaining, here are the leading candidates that are vying for the popular vote in each league. National League […] 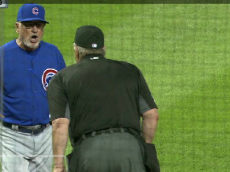 Fat Joe West has made a habit of ensuring that he’s in charge during games he’s working, especially when he’s behind the plate. Chicago Cubs skipper Joe Maddon learned that lesson in Monday night’s matchup against the Cardinals. Cubs starting pitcher Kyle Hendricks had a no-hitter going into the ninth inning, but gave up a […] 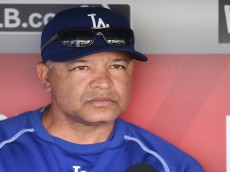 It’s not often that the field manager of a franchise with such deep pockets is credited for his resourcefulness. But that term applies to Dave Roberts, who — in his first year as the head man on the Dodgers’ bench — has them in position to win the NL West. Los Angeles went into this season […] 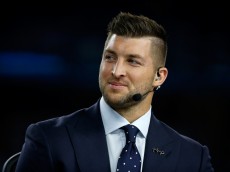 Tim Tebow has traded the gridiron for the diamond, inking a deal with the New York Mets. It’s a minor-league contract for the former NFL quarterback, who initially left the world of the NFL to join the broadcasting booth. He’ll go to either an instructional league or a fall league, according to ESPN’s Adam Schefter: […] Boston Red Sox slugger David Ortiz watched his team play at Petco Park for the final time on Wednesday night, and he received a clever gift from the Padres beforehand. While Ortiz didn’t actually play in the game, as the Red Sox were worried about him possibly suffering an injury playing in the field, the […]