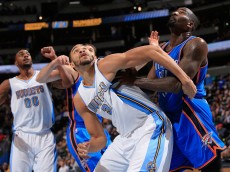 Denver Nuggets big man JaVale McGee is no stranger no extravagant looks and mannerisms, both on and off the court. You never really know exactly what he’ll do, say or look like, and that’s the case now as well, judging by his new haircut, which you need to see. McGee posted a photo of the […] 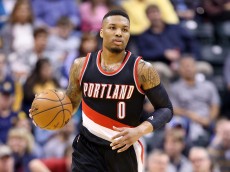 Damian Lillard has no problem with the formation of superteams in the NBA. But the Portland Trail Blazers guard said on SiriusXM NBA Radio Monday that’s not something he would do. “If somebody wants to go join people and do that, it’s not against the rules. They can do it. It’s just more pressure to win when you do […] When LeBron James speaks, many people listen, and he knows that, so he uses his platform in an attempt to sway public opinion. That’s what he did over the weekend when he voiced his support for Hillary Clinton in the 2016 presidential election. James wrote an op-ed for the Akron Beacon Journal, and he outlined […] LeBron James is unique in that he can play the role of forward, coach and general manager. A lot of organizations would not allow for that to happen, but when you have a player of James’ caliber, it’s hard not to give him the flexibility that he wants. James, the player, spoke out on Friday […] 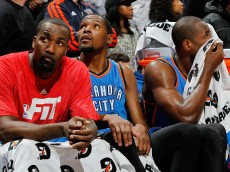 If Kevin Durant took Kendrick Perkins’ advice, he’d be playing for the San Antonio Spurs, not the Golden State Warriors. During an appearance on The Vertical Podcast with Adrian Wojnarowski, Perkins, who played several seasons in OKC with Durant, provided some insight on his former teammate’s decision to leave the Thunder and join the Warriors. […] The Oklahoma City Thunder announced on Thursday that point guard Cameron Payne has an acute fracture in his right foot, which he suffered earlier this week during a team scrimmage. A timetable for Payne’s return is currently unknown. Payne had surgery in late July on his right foot to repair a stress fracture. While the injury from […] With New York Knicks training camp set to get underway, it was only a matter of time before the media got Derrick Rose in front of a microphone to ask him about allegations and investigations. Rose faces sexual abuse allegations and a civil lawsuit, with the Los Angeles Police Department recently entering the fray. Rose […] 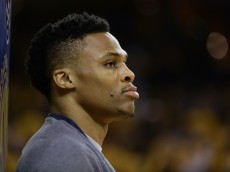 Russell Westbrook and Kevin Durant were once the best of friends. Now, it seems that bromance was just a distant memory, as the two have yet to speak since Durant took his talents to the Bay Area. That’s what we last heard at least. Being that it’s been a few months since Durant departed OKC, […] 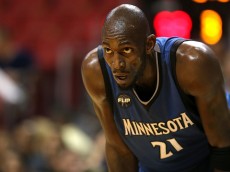 Kevin Garnett will join Kobe Bryant and Tim Duncan as NBA legends to retire in the same year. Garnett and the Minnesota Timberwolves came to an agreement Friday on a contract settlement and a retirement announcement from Garnett is expected shortly, reports Kent Youngblood of the Star Tribune. Garnett, 40, had one year remaining on his […] Chris Bosh failed a physical during his comeback bid and won’t partake in training camp with the Miami Heat. Bosh, 32, has battled blood-clotting issues over the past few seasons but aimed to play with the Heat this year after being cleared by doctors. According to Tim Reynolds of the Associated Press, a physical gave […] In an effort to soften the blow of losing Khris Middleton for about six months, the Milwaukee Bucks acquired Michael Beasley from the Houston Rockets in exchange for Tyler Ennis, Chicago Bulls fans might want to look away. It was easy for Bulls fans to scoff when Derrick Rose joined the New York Knicks and talked up his new locale as a super team. Fine. But now, Rose has gone a step further and compared the fans. The skinny, via NBPA’s Jared Zwerling: I was […] Kristaps Porzingis got his revenge on the young fan who took a crying selfie when he was drafted fourth overall by the New York Knicks in 2015. That fan, whose name is Jordan, attended Porzingis’ basketball camp in New York and had the opportunity to go one-on-one with the Rookie of the Year runner-up. Jordan […] Once a rising star in the NBA, Darius Miles has hit rock bottom financially. The 34-year-old former prep-to-pro player filed for bankruptcy in June, the Miami Herald reports. His first NBA contract was worth $9 million and he grossed more than $65 million in salary and endorsements over a nine-year career. Miles was the third […] When the Memphis Grizzlies open training camp on Sep. 27, Marc Gasol will be a full participant. Ronald Tillery of The Commercial Appeal reports the All-Star center has been cleared to play after recovering from a broken right foot. Gasol missed 30 regular-season games and was out for the playoffs after breaking his foot in February. […] Tamika Catchings, one of the greatest players in WNBA history, is retiring after this season. Her final regular season game is on Sunday when the Indiana Fever host the Dallas Wings at Bankers Life Fieldhouse. The Fever announced Thursday that Indiana Pacers star Paul George purchased 5,000 tickets to the game in an effort to […] 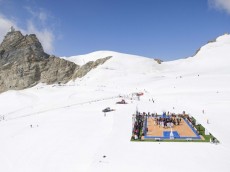 Tony Parker of the NBA’s San Antonio Spurs has seen and done it all, especially after hosting a game atop a glacier in the Swiss Alps. Parker teamed with a sponsor to make the event happen, a showdown featuring players between ASVEL Villerubanne out of France and Swiss League players in weather 11,000 feet above […] Kevin Durant is already enjoying his time in the Bay Area, it seems. Even though summer is coming to a close, and the start of the NBA season is drawing closer, Drake graced Oracle Arena with his presence on Wednesday night, and Durant was in the house to watch him, probably backstage. And since Drake […] 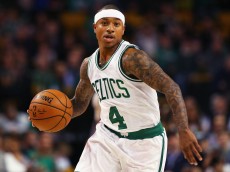 Boston Celtics guard Isaiah Thomas has provided the feel-good story of the week. Thomas was walking around with his wife when he saw a kid shooting hoops on his own. Rather than respect it and keep walking, Thomas decided to join in and make the kid’s day. The Boston Globe‘s Adam Himmelsbach captured the story: […] The Miami Heat and Chris Bosh still haven’t come to a resolution regarding his health. Bosh has missed parts of the last two seasons thanks to a blood issue, and according to Barry Jackson of the Miami Herald, the Heat haven’t given Bosh the go-ahead to play with the team, let alone practice: According to […] Good news for New Orleans Pelicans fans. All-Star power forward Anthony Davis has been medically cleared for basketball activity, the team announced Friday, roughly 5 1/2 months after undergoing a procedure to correct a stress reaction and tendinopathy in his left knee. Davis scrimmaged on Wednesday for the first time since March 20, when he was ruled out […] The Philadelphia 76ers are dead set on trading one of Jahlil Okafor or Nerlens Noel sooner rather than later. This isn’t necessarily a new development, but the NBA draft passed without either big man getting moved. The lack of a deal made it seem like the 76ers simply wanted too much in return for either. […] San Antonio Spurs forward Pau Gasol isn’t too happy about his rating in NBA 2K17. But only because his brother, Marc, has a higher rating, of course. Pau appeared at the game’s premier in Madrid Wednesday and wasn’t shy about his feelings on the whole ordeal. Raúl Barrigón of HoopsHype.com captured the funny moment: Pau […] As Alex Kennedy‘s piece on Basketball Insiders will show, Kyle O’Quinn is widely considered one of the funniest players in the NBA. In his first year playing for the New York Knicks, O’Quinn, with help from Carmelo Anthony, pulled a prank on Kevin Seraphin last season using social media, and it was hilarious. Via Kennedy: […] Nick Young of the Los Angeles Lakers has been in the headlines for all the wrong reasons as of late. This time? He’s sick and tired of living near rapper/singer Chris Brown, who was involved in an incident with the police Tuesday. OTN captured the funny video: Nick Young wants Chris Brown out of his […]