After originally coming into the league with the promise of a bright future, Kenny Britt has turned into one hot mess. Britt’s had over nine run-ins with the law. And earlier this year, the immature posted an Instagram video of an obscene sexual encounter that he had. Britt may be a famous professional athlete, but he isn’t above the law.

Fans either love or hate Richard Sherman. The Super Bowl champion cornerback graduated from Stanford with a degree in communications and does charity work in his local community. He’s an all-around great guy. However, his arrogant displays make him easy to get tired of. It seems as though every other day, he’s spouting off about how he’s better than a certain player at his position.

And his ongoing war of words with WR Michael Crabtree is beginning to get a bit old.

For as good as he’s been on the field, Aldon Smith has been frustratingly immature off the field. He’s twice been arrested for driving under the influence. And, most recently, he was detained and arrested at an airport after allegedly insinuating that he had a bomb. Smith is going to likely start off the 2014 season serving a lengthy suspension because of his transgressions and it’s unfortunate to see such a talented player throwing away a good part of his season because he can’t keep it together off the field.

It seems that no matter what he does, Carson Palmer incurs hate from somewhere. Palmer was known for being a prima donna in Cincinnati and there were even rumors that Bengals fans trashed the signal caller’s lawn on No. 9’s way out of town. Quarterbacks of Palmer’s caliber typically stay with one team, but the signal caller has been on three different ballclubs in four years.

Of all of the players on this list, Ben Roethlisberger has one of the most convoluted off the field stories. The star quarterback has made a name for himself on the field with multiple Super Bowl titles, but he’s been accused of sexual assault twice. Roethlisberger’s checkered past makes him an easy add to the piece.

Up until this offseason, Ray Rice was one of the NFL’s most loved players. He routinely gave back to his hometown of New Rochelle, NY, and his play on the field was solid with the exception of a down year in 2013. However, Rice recently beat up on his wife and has since become a pariah in many circles. He’s surely a villain now.

Pacman Jones has had an inordinate number of run-ins with the police, mostly near the beginning of his NFL career. Now, he’s quieted down and carved out a role as a solid member of the Bengals’ backfield, but he’s still the butt of many jokes because of his past transgressions. For example, Ludacris recently posted a picture on Instagram making light of Jones’ neck injury. Jones wasn’t too happy about it. 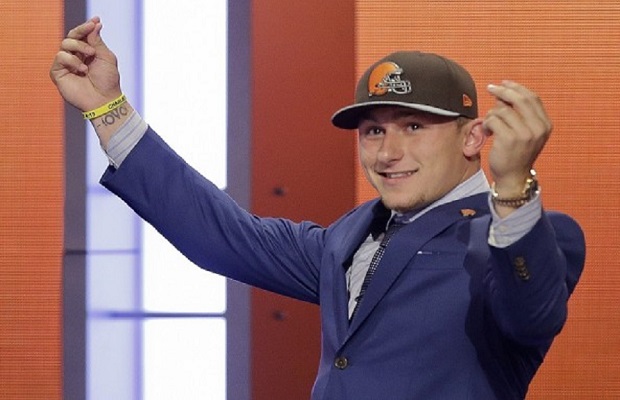 “Johnny Football” has caused quite a stir without even taking a regular season snap for the Browns. After a college career full of recruiting violations, questionable decision making off the field and stellar play in the NCAA’s best conference, Johnny Manziel has taken his act to the NFL. He’s partied hard this offseason, which has given fans some pause. If he plays well on Sundays, all will be forgiven.

Colts running back Trent Richardson was downright awful last season and he hasn’t lived up to the hype of being a high draft pick. Watching Richardson stumble during a dismal 2013 campaign, especially after the Colts traded a first round pick to acquire the rusher, made him an irritating example of high expectations not yet validated.

It may not be due to a lack of effort, but it certainly appears as such. Colts fans are not happy with him at the current time.

I’m shocked that Bernard Pollard isn’t a New York Jet. He’s the one who injured Tom Brady back in 2008, injured Rob Gronkowski’s ankle a few years ago, injured Wes Welker during the receiver’s time in New England and knocked Stevan Ridley out cold during a playoff contest. A player who causes as many injuries as Pollard causes isn’t going to be loved. He’s a true villain, especially to opposing wide receivers.

It’s tough to say whether people dislike Justin Blackmon or feel bad for him. On July 24, he was arrested for the third time and all three arrests have included substance abuse. Whether it’s a DUI or possession of marijuana, Blackmon just keeps finding himself in trouble with law enforcement. Instead of being one of the only bright spots on a poor Jaguars team, the receiver is suspended indefinitely.

Any player suspected of using performance enhancing drugs isn’t going to be a fan favorite for very long. Athletes, like Cushing, who abuse substances compromise the integrity of the NFL. Cushing’s PED incident and subsequent suspension is very far in the past, but it’s still an unfortunate stain on his otherwise solid career.

Before the 2013 season, Matt Schaub was a highly-regarded quarterback known for his consistency. However, last season, he became a turnover machine. After starting off the year 2-0, Schaub lost eight games in a row and was ultimately yanked in favor of Case Keenum. Things got so bad that a Texans fan went to Schaub’s home and berated him for playing so terribly. Fittingly, Schaub’s a Raider now.

In the 2011 NFC Championship game, Kyle Williams cemented his status as a villain in the league and was blasted by Niners fans on Twitter. Filling in at punt returner for an injured Ted Ginn, Williams muffed two punts and his team ended up losing the game. Granted, San Francisco could have taken advantage of more scoring opportunities and won the game, but Williams’ gaffes on national television put him in the spotlight for all of the wrong reasons.

He spent the entirety of last season on injured reserve. And until he makes plays in the league again, he’ll remain in the doghouse.

Back in 2011, then-Buccaneers cornerback Aqib Talib allegedly fired a handgun at his sister’s boyfriend. He found himself in hot water with both authorities and the NFL, but now he’s a contributing member on a team in playoff contention. Even still, it’s evident that he’s not the most well-liked player in the league, with Steve Smith telling him to “ice up” after a game last season.

Manti Te’o has yet to shake the fictitious girlfriend narrative that made him infamous during the draft process. He made Forbes’ list of the NFL’s most disliked players, despite the fact that he’s been relatively quiet (and mediocre) since entering the league. Lennay Kekua will eventually become the answer to a very good trivia question, but for right now, Te’o is disliked around the league.