There were rumors of dissension and locker room incidents between Tate and other members of the team, including WR Percy Harvin and QB Russell Wilson.

Lance Zierlein of Sports Talk 790 touched on some of that on Twitter.

Heard “anger management” had quite a bit to do w/ Harvin’s departure in Seattle. (1/2)

History of confrontations w/ teammates contd in SEA according to my guy including punching G Tate during SB week & near fight w/ #3 in ‘14 — Lance Zierlein (@LanceZierlein) October 17, 2014

So when Tate got wind that Harvin was traded to the struggling (1-6) Jets, he couldn’t help but troll.

He started with a retweet. 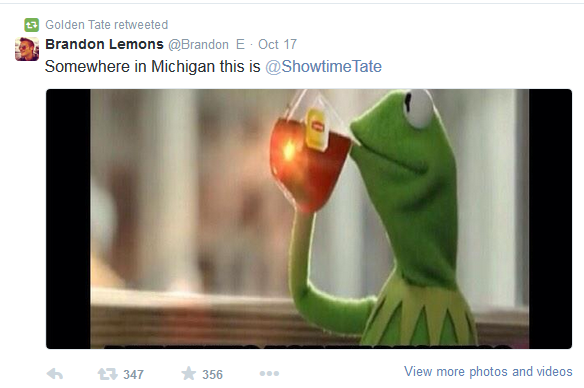 And then he took it one step further with a great post on Instagram. Notice the tea-sipping  and the Lions door mat right in the middle of the picture.

Tate never really struck me as a tea guy. He always seemed like more of a Coca-Cola drinker.

The speedy WR signed a 5-year, $31 million deal—quite lucrative for a slot guy—with the (4-2) Lions in the offseason. The team is playing well and is currently in first place in the NFC North. Harvin, on the other hand, was cast out of Seattle for next to nothing—a conditional draft pick. He’ll now be catching passes from the erratic Geno Smith and fielding questions from the NY media.

And Tate’s enjoying it all as he sips tea with a smile on his face.