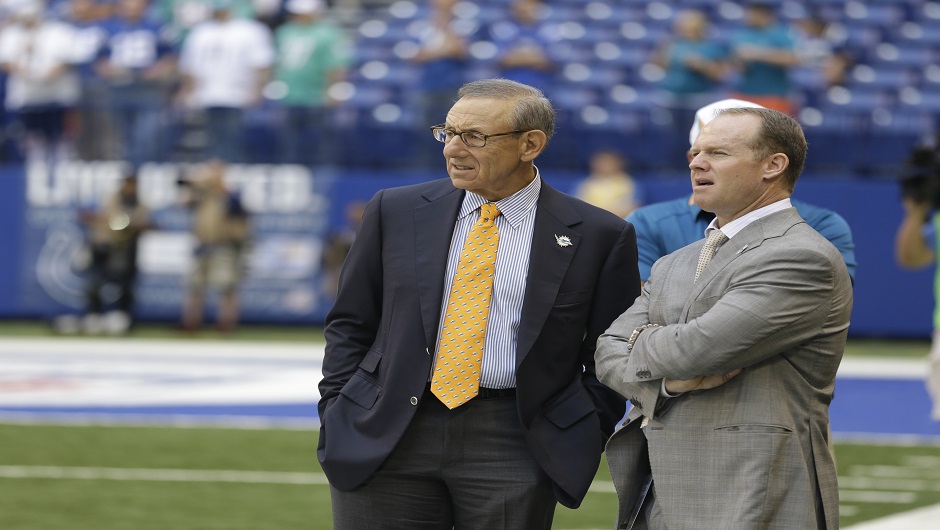 Since the afternoon of Dec. 29th, Miami Dolphins fans have awaited the news of Jeff Ireland’s demise as the Dolphins’ general manager.

Sadly, we will have to wait another year for such news, as Mike Silver reported that Jeff Ireland will remain Miami’s general manager in 2014.

Just what the Dolphins needed, another offseason for Emperor Jeff to rebuild and retool a roster that is still looking for its first season above .500 since 2008.

Ireland will be entering his seventh (!) season as Miami’s general manager, and his fourth (!) since Bill Parcells took his ball and went home in 2010.

In those seven years, Miami has seen second round busts come and go such as Philip Merling in 2008, Pat White in 2009, the failed trade up into the second round for Daniel Thomas in 2011, and the ill-faded 2012 selection of Jonathan Martin.

Every general manager has their own list of players that were passed up, but Ireland’s list would look like a failure for general managers who have been on the job for 10 years, but Ireland has filled a substantial list in a little more than half the time.

Because of such failures, the Dolphins have had to use free agency to fill holes on the roster. This led to a 2013 spending spree that netted Mike Wallace, Brandon Gibson, Dustin Keller, Dannell Ellerbe, Philip Wheeler and Brent Grimes.

Of those players, only Grimes played at a high level all season, while Wallace didn’t get going until midway through the season (which can be attributed to Miami’s coaching staff, which is another group that needs to go). Gibson was effective until he was hurt, and Keller never got the chance due to injury. I can’t hold those two players on Ireland due to their health failing them.

What I can hold against Ireland was the mediocre-to-horrible play of Dannell Ellerbe and Philip Wheeler. Ireland brought both players on to replace the aging but effective Karlos Dansby and Kevin Burnett, then saw Miami’s run defense downgrade from 11th in 2012 to 24th in 2013.

Wheeler was especially horrible, as he was ranked by Pro Football Focus as one of the worst linebackers in the NFL.

It has been said by many Dolphins fans that Ireland isn’t the problem, it has been the coaching staff. This does have some validity, as plenty of players regressed while with the Dolphins, before progressing with new teams after leaving (Reggie Bush, Jake Long, Anthony Fasano, Sean Smith and the aforementioned Dansby are five examples of players who had sub-par seasons with the Dolphins under Philbin and his staff then turned it around in new places).

But that brings about this question: who chose the coach? Yes, Stephen Ross selected Philbin whereas Jeff Ireland’s man was Mike McCoy (now heading to the Divisional Playoffs with the San Diego Chargers), but as general manager, Ireland could’ve done a better job pleading his case.

After all, he did a great job pleading his case for Stephen Ross to keep him after a disastarous 2011 season where he should’ve been fired, and had to have done a better job after a 2013 season that should’ve been his last chance.

Jeff Ireland isn’t just bad for the football side, but he’s bad for the business side of the Miami Dolphins. His retention will likely mean plenty of season ticket holders will drop them in 2014. Already there have been plenty of angry Dolphins fans on Twitter who have pledge to do just that.

Dolphins fans are also fighting amongst each other over where the team’s problem truly lies. I’m of the belief that Jeff Ireland is a big part of the problem, with the coaching staff and owner being as much to blame as Ireland.

If I ran the Dolphins, I’d clean house. Unfortunately, Stephen Ross owns the Dolphins, and for 2014, he wants more of the same mediocrity.

That’s the message he’s sending by retaining Ireland, and is a message that will hurt his bottom line. It’s already hurt the team on the field, and has already hurt what was once the premier sports brand in the state of Florida.