The moments leading up to the onset of the 2014 NFL Draft were filled with much uncertainty. But the deepest draft class in the last decade was sure to feature fireworks.

And Day 1 did not disappoint. The Johnny Manziel Draft Saga was thoroughly entertaining in and of itself. And while only four trades were made on the evening, various exciting moves had fans and media alike buzzing.

The players that were selected in the first round came from a pretty even split on both sides of the ball—18 on defense and 14 on offense. And a record-setting nine defensive backs were taken off the board.

An event of this magnitude is guaranteed to make a splash on social media networks. NFL fans and media members flocked to Twitter to voice their opinions and discuss Day 1 in real-time.  So let’s go back and revisit the best tweets to sum up how it all went down, in chronological order:

It was a big day for the SEC West and for the state of Florida—areas that are known for breeding pro-level talent.

SEC West by itself produced more first-round picks (8) than any other conference.

…But it was a bad showing for running backs. Are the last two drafts proof that the NFL really is a pass-heavy league now?

RT @AdamSchefter For second straight year, no RBs drafted in round one. >>> First time in NFL history no 1st rnd RBs in back-to-back drafts

Day 1 started with two picks that surprised no one in DE Jadeveon Clowney (HOU) and OT Greg Robinson (STL). Being the No. 1 overall pick worked out pretty well financially for Clowney.

Then, the madness ensued. Blake Bortles was selected No.3 overall and was the first QB taken off the board. Johnny Manziel’s sad-face reaction pretty much summed up the pick. (photo via @ForTheWin) 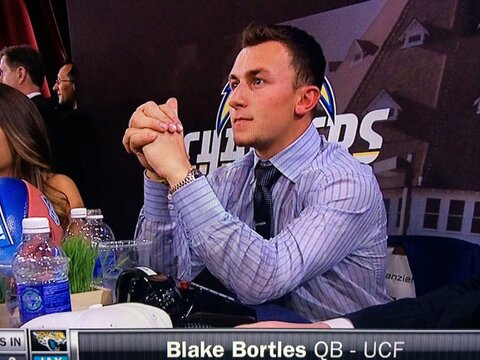 The Jaguars probably could’ve traded down to net another pick while still acquiring Bortles. But Jags will be Jags, I guess.

Sorry, Jacksonville, you should have taken Buffalo’s 2015 1st round pick and uh, taken Bortles at 9?

But Gus Bradley stood by his team’s pick in his post-pick press conference. Bortles was clearly their guy and the team did not want to miss out on taking him.

Gus Bradley said Jaguars would have taken Bortles over Clowney if Clowney had fallen. — Vito Stellino (@vitostellino) May 9, 2014

Many analysts then expected the Browns to follow up and take Johnny Manziel. They didn’t, and instead traded down with the Bills, who took WR Sammy Watkins. And he took the best selfie of the night with commissioner Roger Goodell (photo via @CorkGaines). 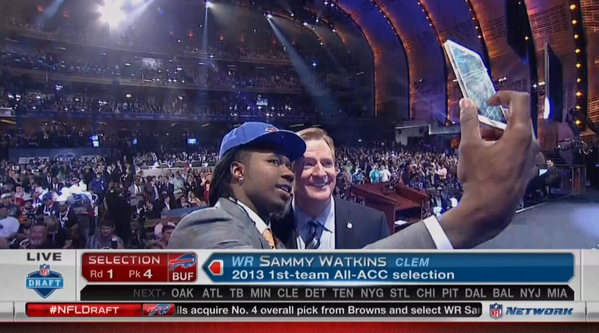 After a few more picks, the Bucs would address one of their biggest needs by selecting WR Mike Evans. He’s a big target.

The Browns then decided to trade spots with the Vikings and moved up one pick. So with Cleveland on the clock at No. 8 following the trade with Buffalo, this was Manziel’s time, right? Wrong. The Browns selected CB Justin Gilbert and the Vikings took LB Anthony Barr. But maybe the Titans would be interested, since QB Jake Locker has been disappointing thus far and because they’re also ushering in a new regime and coaching staff. It wasn’t to be. They instead selected an offensive lineman in the first round for the second consecutive year.

Titans sure have put a lot in the offensive line. If they only had one of those … what do you call them? Oh yeah, quarterbacks. — Greg A. Bedard (@GregABedard) May 9, 2014

After a few more defensive players were selected, the Dallas Cowboys were suddenly on the clock. And Manziel was available! WOULD JERRY JONES IGNORE HIS FELLOW WAR ROOM ATTENDEES AND PULL THE TRIGGER?(photo via @SportsDayDFW)

No, he would not. The Cowboys brass showed how it truly feels about OT Doug Free, and elected to go with OT Zack Martin, who is versatile and can play anywhere on the offensive line.

But hey, even Manziel admitted the idea would’ve been tough to digest for the NFL community .

Quote of the year – Johnny Manziel on possibility of going to Cowboys: “I don’t know if the world could’ve handled that, honestly.” — Nick Mathews (@Nick_Mathews) May 9, 2014

Maybe he’s right. The Ravens then selected LB C.J. Mosley, and the Jets once again drafted a DB in the first round in Calvin Pryor. No surprises here, especially given head coach Rex Ryan’s  propensity to draft defensive backs early. Then, the Dolphins were on the clock at No. 19, with offensive line being their biggest need. So they selected…OT Ja’Wuan James, with Morgan Moses, Cyrus Kouandjio and others available? Did they really get good value here? Why not trade down?

So no OT taken after the Dolphins at No. 19. Wonder if Miami could’ve gotten anything for a trade down.

And Dolphins C Mike Pouncey weighed in about the new blood on the offensive line. You’d think he’d watch his words after the Incognito-Martin saga last year. He didn’t. And he, of course, made an ignorant comment.

Great pick! I can’t wait for our gifts he’s getting us lol

The Saints would then select WR Brandin Cooks, who should be a great fit playing with Brees and Co. in Sean Payton’s offense. He’s a YAC machine and will be a huge weapon in the middle of the field.

We then saw the Packers on the clock. And they’re a team that likes to be aggressive on defense with DC Dom Capers calling the shots. And they needed help in the back-end of the secondary. So they took S Ha Ha Clinton-Dix. This pick made a ton of sense and filled their biggest positional void.

Best pick: Manziel/Bridgewater were great, but love Clinton-Dix to GB. Great fit for him, good value, and he fits with that team so well

And now, the Browns were back on the clock after a trade with the Eagles. WOULD THIS FINALLY BE MANZIEL’S SHINING MOMENT? Yes, it would be. (photo via @CJZero)

Looking at the above photo, we see an underwhelming crop of first-round picks. Browns’ track record of drafting QBs is pretty awful. But the team did receive great value with this pick, as they were able to move down and still get their potential franchise QB, a first-round pick and a Pro Bowl-caliber CB:

Oh, and looking at analytics, Manziel broke the Internet when he was drafted.

Of 6.4M NFL Draft related tweets during live telecast, peak was 81,817 tweets per minute when @JManziel2 was picked.

This put the Chiefs on the clock. And since they’ve lost a good chunk of their offensive line in the offseason, given their offensive scheme, this pick would surely address that area of need, right? Nope.

After CBs Darqueze Dennard and Jason Verrett were drafted by the Bengals and Chargers, the Eagles were on the clock. Many thought they would go WR or CB. They didn’t, and instead selected DE Marcus Smith (who quietly ranked second in the nation in sacks last season with 14.5). Eagles fans such as this one were a bit surprised (photo via @Xmasape). 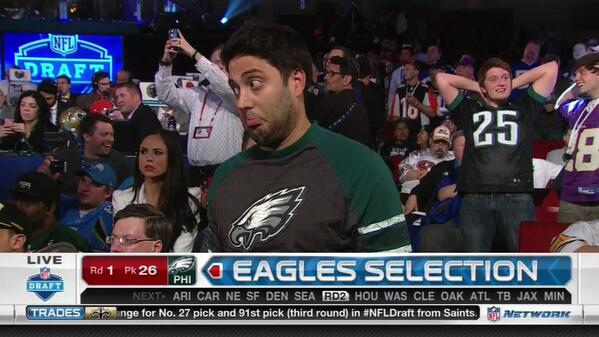 After a few more picks, in which the Panthers finally addressed their lackluster WR corps by drafting Kelvin Benjamin (although it was a reach drafting him that early and there were better options available, such as Marqise Lee and Allen Robinson).

And the Patriots landed DT Vince Wilfork’s potential future replacement in Dominique Easley. If he stays healthy, he’s a very disruptive player who can anchor the interior of a defensive line.

The 49ers made a great pick in taking S Jimmie Ward who can start as a nickel CB immediately. And the Broncos made a bit of a reach in taking CB Bradley Roby (who many analysts had going midway through Day 2).

We were then approaching the end of Day 1. And it seemed as if QB Teddy Bridgewater would have to wait until Friday night to hear his name called. With Houston having the first pick of the evening (No. 33 overall), it seemed like the obvious move. And then, at the last minute, Minnesota traded up, swooped in and drafted him with the final pick of the first round.

So there you have it. Bridgewater did manage to sneak into Day 1. And many fans were happy for him as he has a great backstory.

32 #Vikings Teddy Bridgewater. Steal of the draft. Best QB in the draft and fits Norv’s system to a T. Good RB as protection. Will dominate

So, as we look ahead to Day 2, which teams fared well in the first round?

I love Mike Zimmer’s draft in #Minnesota. Got the monster impact player on D (Anthony Barr) and determined winner at QB (Bridgewater).

And which teams made questionable picks?

My least favorite: Gilbert to CLE, James to MIA, Smith to PHI, Martin to DAL, Roby to DEN. Watkins to BUF (due to trade).

What can we expect in Day 2?

Round 2: I’d expect WR and OL the most popular positions. The depth of the WR class will show with what I think 8 or more could get drafted