A quarterback-less top 10 for the second straight year is a real possibility in the 2014 NFL draft. It’s worth wondering whether some of this is not because of Teddy Bridgewater’s Pro Day or Johnny Manziel’s tendencies, but because teams that wait on quarterback are finding more success than before.

The trends in rookie quarterback contracts, modern NFL offenses and rule changes inflated the value of quarterback draft classes over the years. Now the success of teams like Seattle and San Francisco may have helped that bubble burst.

This is not to say quarterbacks’ value on the football field has diminished in any way; just that drafting quarterbacks in the top 10 is proving less successful and popular in recent years, which seems odd as rookie contracts became far more affordable after the 2011 lockout and league passing records continue to shatter.

Former Broncos’ GM/Director of Player Personnel Ted Sundquist knows a thing or two about how the draft process goes.

“You see that so often. Teams take those quarterbacks high because they feel pressed to start over,” he said. “Usually it’s a new coach taking over for the guy who got fired because they landed there in the top 5 or so, and they just don’t have the infrastructure and the patience level to get in there and bring them along.”

Sundquist joined Coach Mike Shanahan in the war room as Denver dealt a third-rounder (68th) to move from No. 15 to No. 11 and select Jay Cutler, the raw but immensely talented prospect out of Vanderbilt.

But does drafting a QB early equate to playoff wins? Since January 2013, quarterbacks that went top 10 in their draft class have accounted for five playoff wins while the others total 17.

This millennium, top-10 quarterbacks have not been worthy of a good risk-reward, and first-rounders aren’t blowing the rest out of the water. Look at 2005-2011 for example. 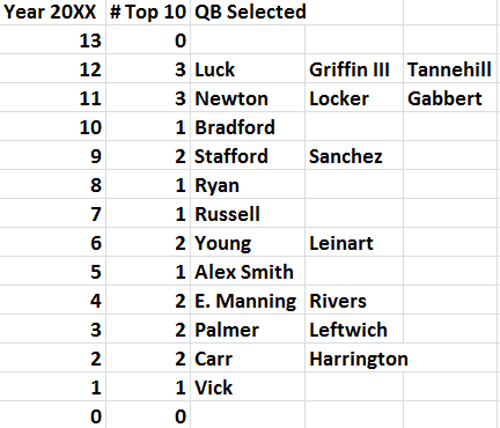 Then last year featured no passer taken in the top 10 for the first time since 2000, tied for fewest taken in round one (1). It was the longest it took for a QB to leave the board since 2000 (Manuel 16th overall, Pennington 18th).

In a modern passing league that has increased limitations on the amount teams must commit to high quarterback selections, the sense of urgency in drafting that franchise passer exploded between 2011 and 2012. Reason being: The 2011 NFL Collective Bargaining Agreement made contracts for top 10 quarterbacks far more palatable, and the number of quarterbacks selected in both the first round and inside the top 10 set highs for the millennium.

The past two Super Bowls featured starting quarterbacks with an average draft position of 32.5, essentially a second-rounder.

Stats, stats, and more stats about the correlation between drafting quarterbacks in early rounds and playoff wins:

In other words, hitting on a hidden gem at quarterback had been growing increasingly rare since Brady was drafted. However, this notion is being but to rest in recent years.

Kaepernick and Wilson were drafted by Niners and Seahawks organizations intent on going against the grain to immediate and astoundingly successful results. We watched how the NFC West foes built up other positions and placed young, inexpensive, post-first round quarterbacks into starter roles.

“There were flaws and kind of questions in both of those guys’ games, but the Seahawks and 49ers were set up to in my opinion to develop those guys and they were willing to live with those flaws,” Sundquist said. “They didn’t try to cram a square peg into a round hole; they took what they had in the player and they developed their system around that guy, and allowed him to do what he can do and do it well.”

“You might see more quarterbacks dive outside of the top 10 and become successful if more clubs would be flexible and a little more yielding in their overall process in bringing a quarterback along. The things that the Seahawks are doing right now as an organization across the board are exactly what I wish I had an opportunity to do, not only in Denver but somewhere else…It’s the perfect storm right now and Russell Wilson got himself into an awesome opportunity.”

The St. Louis Rams have wallowed in the bottom half of the division while paying QB Sam Bradford astronomical amounts.

One could argue Bradford was rounding into a decent starter in 2013 before the season-ending injury, but the amount St. Louis could afford on the offensive around him made extending drives tough and left him battered over the years.

Now the Rams are reportedly interested in bringing in competition via the 2014 draft, though I would be shocked if it came at a draft position anywhere close to where Bradford was selected. This deal came before the new CBA and haunts St. Louis more every year, even if Bradford does take another modest step in 2014.

(Image via Spotrac with information from Over The Cap) 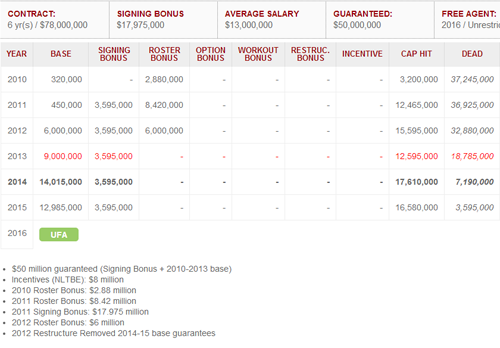 “Generally speaking, you get what you pay for,” said Sundquist. “Kaepernick and Russell, I don’t wanna say they’re anomalies. They’ve come in and they’ve played extremely well. There are other instances of quarterbacks in the league right now that are top tier guys.”

Poor quarterback play can sink an extremely talented roster, just ask the Cincinnati Bengals after posting first-round playoff exits in the past three seasons. However, I bet they’re happy about foregoing quarterback in round one to snag A.J. Green, before taking a chance on Andy Dalton in round two of the 2011 draft.

The hit from a miss is far less (fiscally) damaging when it spares a first rounder. It’s tough to qualify Dalton as a pure whiff quite yet, but it’s important that Cincy has become a postseason stalwart despite some extremely uneven quarterback play from a relatively late pick to start from day one.

Regardless of whether Dalton ever finds consistency to go along with the highs in his volatile performance, grabbing Green at No. 4 and Dalton at No. 35 showed restraint from a QB-desperate franchise that served them well.

“There’s no point in over-drafting a quarterback if all they’re going to do is set you back another three years (while) you figure out whether they’re any good or not,” Pro Football Focus founder Neil Hornsby said recently on the Prime Sports Radio Network.

The same goes for another team that came alive to reach the playoffs in three consecutive seasons with a young second-rounder (with a bit of Alex Smith mixed in) leading the way, the San Francisco 49ers.

Waiting on a QB allowed them to snag Aldon Smith in the top 10 in 2011, a pick that’s gone a long way toward validation and should continue to do so if Smith finds peace and control off the field.

Surviving a young quarterback’s struggles is much more feasible with fewer eggs in that one basket, from a roster construction perspective. Just watch the Colts or Redskins when Andrew Luck or Robert Griffin III are having an off day; and it’s hard to really call either of them “overdrafted” given the general consensus heading into their particular draft. However, a whiff in overdrafting quarterback has greased the slopes for rebuilding all too often.

“I think there are some clubs, I’m not going to mention any clubs in specific, but let’s just say a club for whatever reason hits the playoffs and they’re a one-year wonder and suddenly they’re picking from the back-third of the draft, but in the past they’ve struggled, unless it’s truly a turnaround. Or it could just be an anomaly where they had that one spike year and now they’re back to wherever they’re at. They might not have the infrastructure in place to be able to bring a young quarterback like that along.”

The necessity of the risk doesn’t seem to be what it used to be. And this is incredible considering how the 2011 CBA helped make drafting a quarterback No. 1 much less of an absurd investment. Just compare Cam Newton’s contractual terms below to Bradford’s above, two top picks separated by just one year.

Baltimore finally got over the hump with their quarterback selection from the second half of round one, taking future Super Bowl MVP Joe Flacco with pick No. 18.

“The Ravens knew that they could win with a guy who might be missing one of seven things, or maybe two of seven things, but that they were strong enough in other areas and they knew who they were well enough to make up for that deficiency…Questions with regards to parts of his game, but they were willing to live with that because they’ve always been known for their defense and a hard running game-type style…They knew they could live with that as he kind of learned the game.”

Three drafts earlier the Green Bay Packers found their own late-first faller in Rodgers. The 2011 Super Bowl MVP, of course in retrospect, would’ve been worth trading any bounty necessary to move up from No. 24 and grab. However, that may have required dealing picks that would turn into critical cogs in the 2011 title run, and such a deal would be atypical for Packers general manager Ted Thompson.

With current Seahawks GM John Schneider on his 2005 staff, Thompson and Coach Mike McCarthy drafted Rodgers to structure a careful grooming process behind Brett Favre, as Sundquist would plan one year later with Cutler and fairly successful incumbent Jake Plummer. Rodgers developed from the sidelines for three years, practically unheard of in today’s NFL, before he, Thompson and McCarthy went on to Super Bowl glory.

“They did basically what we were trying to do with Jay Cutler and Jake Plummer…Here’s an opportunity to get a guy who we thought was probably a top 10 player, he’s fallen down to us,” Sundquist said. “Let’s take him here and let’s sit him for a while because we know (Jake just like) Brett still has some game in him and in two years we’ll have a top 10 elite quarterback who’s had a chance to study and mentor under the best of all time…Those are the types of things on draft day you don’t plan for sometimes, but you’ve got to be ready for.”

The three-year plan was abandoned midway as Sundquist was let go, Cutler was thrust into the lineup in year two and then eventually traded after Josh McDaniels replaced Shanahan.

It begs the question as to whether skill-set concerns for Bridgewater, Johnny Manziel, Blake Bortles and Co. would threaten their chances of being drafted on Day One nearly as much if teams weren’t having increased success in taking a quarterback later in the first round and even after. Could this be the lurking variable in the recent draft-stock plummet of this year’s quarterback class?

Or perhaps teams are navigating the need-value tension with less desperation when it comes to the quarterback position.

Where on that spectrum the league falls in 2014 compared to the last two seasons poses an interesting question about the volatile stock of this year’s quarterback class.

Are Bridgewater, Manziel, Bortles, Savage and Carr worthy of first round selections? Or are teams better off waiting to draft their potential franchise QB?

We’d like to thank Ted Sundquist for contributing to this article. He is the founder of The Football Educator and author of Taking Your Team to the Top: How to Build and Manage Great Teams like the Pros.

Merry freelancer. NFL Lead Writer at The Sports Daily, Contributor to Sporting News. May have also seen my work at USA Today, Bleacher Report, Pro Football Focus and the late AOL FanHouse. VT grad. I am also an avid diabetic.