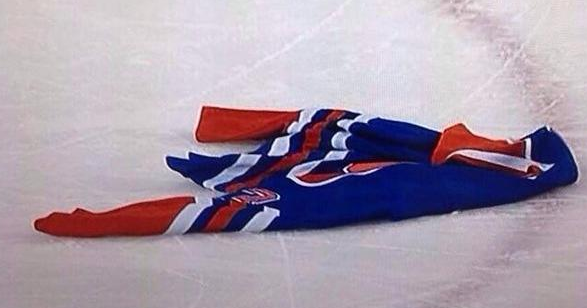 Edmonton Oilers fans are quitting on their team a bit early this year.

Even with just one regular season game in the books—a 5-2 loss to the Calgary Flames—it’s looking like it could be another rough year for Oilers fans as the team continues to rebuild. And after watching the team win just 29 games last season, some of its supporters are already losing it.

One particular fan even threw a sweatshirt onto the ice during Thursday night’s game. The problem was that a cell phone was in the pocket.

An Oilers fan threw their hoodie on the ice WITH THEIR PHONE IN IT after the FIRST GAME? My god. pic.twitter.com/S2V7d1nrVS

You can’t blame the angry fan. If the Oilers continue to attempt to kill power plays like this, it’ll be a long season for them.

Maybe this whole thing is a sign to buy a new phone. Or to find a new team to root for.