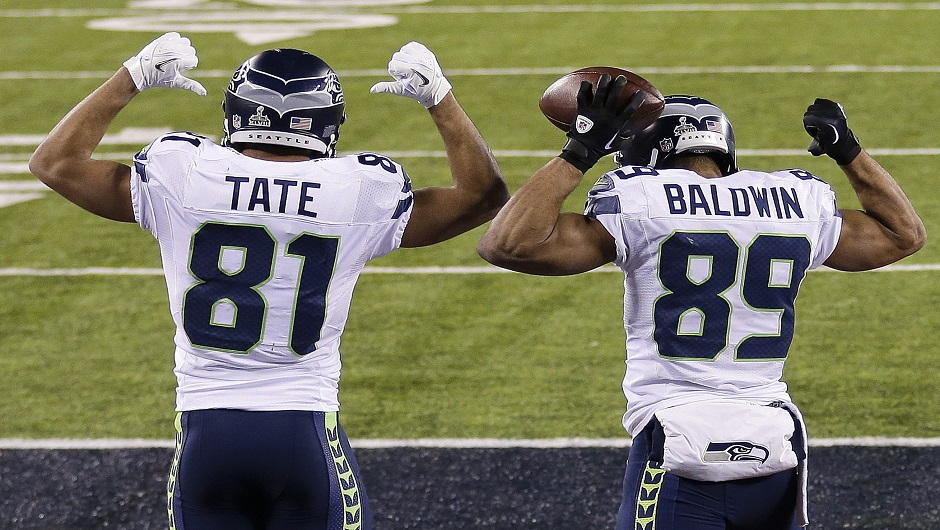 In Super Bowl XLVIII, the Seattle Seahawks made a big statement about the strength of the NFC by making the Denver Broncos look completely inferior in all facets of the game.

With a 43-8 beatdown, Seattle even threatened to break the Super Bowl margin of victory record (45 points, Super Bowl XXIV). The game was not competitive at any point. And, yeah, sorry Broncos fans, but Super Bowl grades are a train that does not stop.

Russell Wilson – A: Wilson struggled a bit early, missing a wide-open throw in the flat and relying heavily on tucking to run during an opening drive that stalled out with a field goal. We also didn’t see him strike deep much, though that’s perfectly fine given the circumstances. Wilson gave Seattle exactly what it needed, extending plays with his feet and drives with third-down conversions as Peyton Manning sat idle. Pure efficiency earned him a 123.1 quarterback rating on the day and a 107.5 mark when Jack Del Rio dialed up the blitz.

Whether it was gunning for deep for Demaryius Thomas or a crossing Julius Thomas, the pressure Seattle brought threw off Manning’s release just enough to make his lack of arm strength or ability to throw a tight rope problematic. This wobbly thing above is not completely indicative of Manning’s record-setting season, but does show the downside of physical shortcomings at this late stage in his career. Manning recorded a respectable 99 quarterback rating without pressure but that dropped to 31 when the Seahawks did harass the regular season MVP.

Seahawks – B: Running backs played an abnormally small role for both teams in this game, with 71 of Seattle’s 135 rushing yards coming from Wilson or Percy Harvin around the edge. There was just nowhere to go in the interior, and offensive coordinator Darrell Bevell worked around that.

Broncos – C: Denver’s lack of run game can only be slightly attributed to playing behind all day as this unit wasn’t looking to punish Seattle in the early going anyway. Knowshon Moreno and Montee Ball have capitalized on avenues and favorable blocking that Manning’s audibles create, though they haven’t really made anyone miss in the backfield or at the second level this year. Those favorable situations weren’t there today, as 14 carries for 27 yards attest.

Seahawks – A: When Jermaine Kearse is breaking through a parade of would-be tacklers on the way to paydirt and Ricardo Lockette beats Dominique Rodgers-Cromartie on the way to a grab, you see just how deep and complementary Seattle’s receivers truly are. Doug Baldwin converted all five targets into 55 yards and a score while Golden Tate stayed quiet yet still chipped in on the ‘Hawks’ many back-breaking third-down conversions. Harvin and Luke Willson recorded the only Seattle drops on the day, though Harvin more than made his contribution elsewhere.

Broncos – B: Demaryius Thomas led the NFL in yards after catch yet could manage little against the Legion of Boom. His 13 receptions set a Super Bowl record and proved the bright(est) spot for Denver tonight. Yet, when Kam Chancellor crashed down in coverage on Thomas, his two catches only went for five yards, including a statement shot on Denver’s second drive of the game. Welker picked up a ton of garbage yards while Julius Thomas and Eric Decker were barely heard from, the latter two tallying 33 yards combined.

Seahawks – C: Max Unger continued to struggle while Terrance “Pot Roast” Knighton remained his usual dominant self and this was the most encouraging sign for Denver in the first half. Seattle backs including Marshawn Lynch and Robert Turbin picked up nine yards on four carries to either side of center and the run game relied largely on gadget plays to Harvin because Seattle just couldn’t get much push up front. However, from a pass protection standpoint their line played well above their regular-season level and LT Russell Okung allowed Wilson to hang back in the pocket.

Broncos – C: It all starts with the tone-setting snap into the end zone by Manny Ramirez, who is typically an excellent center. All-Pro guard Louis Vasquez left injured and that was well after the wheels had come off for Denver. To his right Orlando Franklin turned in his worst performance of the season, surrendering four pressures and a hit after allowing two pressures and no hits the rest of the postseason.

Seahawks – A: Seattle only blitzed on six of 51 dropbacks yet got pressure on about a third of those according to Pro Football Focus. As Steve Palazzolo explained this offseason, Manning is brilliant against pressure up the middle but can struggle when it comes off the edge. That’s exactly where the Seahawks struck most effectively as Cliff Avril and Chris Clemons put on a siege, with Avril directly contributing to two errant throws-turned-interceptions and Clemons stripping Manning late. And I’d be remiss in not mentioning Michael Bennett, who forced a fumble and often slid inside to create matchups that helped Seattle get pressure without bringing extra guys.

Broncos – B: When Von Miller landed on injured reserve, Robert Ayers stepped up and had especially excelled at setting the edge. This was not a strength during the Seahawks’ opening drives, as Wilson spun out and made him pay by picking up yards (or extra time to throw) on his feet. As has often been the case in recent months, Shaun Phillips led Denver in quarterback pressures but that only totaled two. Knighton bullied interior lineman per usual and Seattle countered by avoiding that area of attack more than normal.

Seahawks – B: There were 11 players who recorded more snaps on Seattle’s defense than Malcolm Smith, the Super Bowl MVP. He outperformed his fellow backers but probably benefited most from “right time, right place” on his pick-six and fumble recovery. The choice should have come down to Avril, Clemons or Chancellor. Running crossers at Seattle LBs yielded some success for Denver, to an insignificant degree.

Broncos – B: The highlight here came from Nate Irving on a pass defense under the goal post against Tate that temporarily kept Denver alive and breathing. Then the usual good work against runs between the tight ends led by Danny Trevathan. The Seahawks were able to exploit Wesley Woodyard and Paris Lenon a bit in coverage.

Seahawks – A: The Legion of Boom suffocated a Denver offense that saw their league-leading yards after catch-per-reception drop 2.4 from their regular season average. Chancellor kept the second half entertaining by obliterating Welker, while Richard Sherman remained his usual shutdown self. Byron Maxwell performed admirably in his work on Thomas, pulling a vintage “Peanut” and punching out a drive-ending fumble. Walter Thurmond was exploited but mostly in garbage time.

Broncos – D: Outside of Rodgers-Cromartie this matchup looked very bad on paper for Denver, and even DRC had a poor day. Coverage didn’t impress and tackling became an issue; corner Tony Carter and safety Duke Ihenacho each missing a pair. The loss of Miller has overshadowed just how much they need Chris Harris. Champ Bailey had Torrey Smith flashbacks as Baldwin beat him badly over the top when the game was still in reach.

Seahawks – A: Kudos to Seattle for staying aggressive out of the half and putting injury-prone Percy Harvin on the kickoff return, because it certainly paid off. Steven Hauschka added two more field goals to finish the postseason a perfect 8-for-8. Trindon Holiday tried to bounce returns outside on ‘Hawks kick coverage and found nowhere to go.

Broncos – D: Denver’s struggled mightily at defending kick returns this year, and it’s not hard to see why.