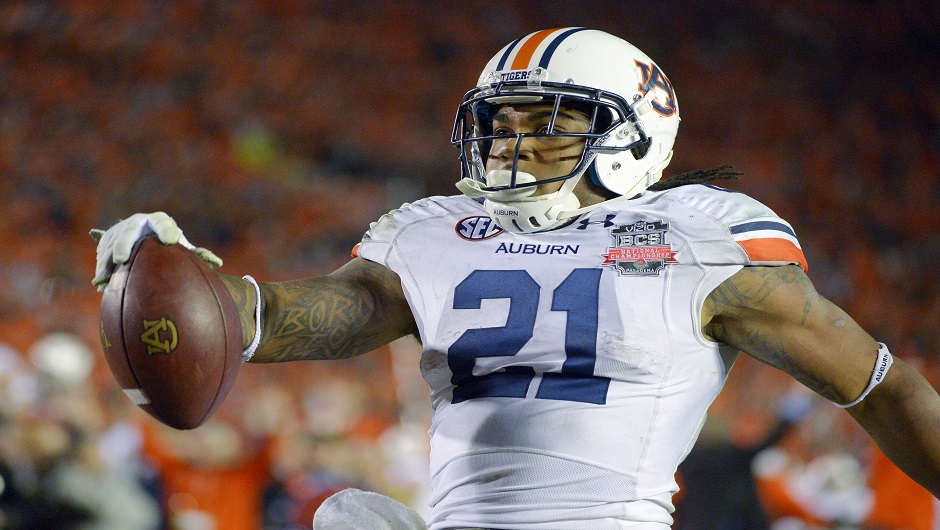 RB Tre Mason dominated the SEC during a magical 2013 season, but he’ll need to prove himself all over again at the next level.

Mason was a relatively unknown prospect going into the year, but after he racked up 1,816 yards rushing and 23 touchdowns on 317 carries in college football’s toughest conference, talent evaluators started to take notice.

A number of the rusher’s attributes make him a prospect worth drafting. Let’s take a look at them.

Mason’s downhill, punishing running style makes him difficult to take down. Many times, two or three defenders were forced to gang tackle the former Tiger. Mason runs downhill and tends to always fall forward, which is a testament to his leg strength and balance. The running back seems to find a way to grind out an extra yard or two whenever possible—he’s a lethal weapon in short-yardage situations.

In the open field, Mason can cut on a dime and he employs an elite juke move to get by defenders. The rusher uses his blockers well and makes the right cuts when necessary. It’s hard enough to bring down this running back when he has a full head of steam, but the combination of Mason’s physical running style and elusiveness in space make him almost unstoppable.

As good of a rusher as the former Auburn standout is, Mason can also catch passes. He has soft hands and corrals a lot of the balls thrown his way, which makes him a dangerous option on checkdowns and screen passes. Though he’s not the quickest runner, Mason turns targets into receptions as well as any other running back in the class.

Mason’s vision needs work and he often doesn’t see holes when they open up. Many times, he’ll run into a pile of defenders when an opening exists just a gap or two away. Due to his lack of great ballcarrier vision, Mason has trouble capitalizing on great blocking in front of him. Even if this former Tiger ends up on a team with great run blockers along the offensive line, it’s reasonable to expect him to struggle early on.

Past that, Mason will often try to bounce inside runs to the sideline (a la Chris Johnson). If nothing is immediately open in front of him, Mason will attempt to cut across multiple gaps and get outside. He’s not laterally quick enough to make this work and it’s a bad habit nonetheless. In the NFL, he’ll need to learn to stay within the confines of the play that’s called.

Along with a lack of great lateral quickness, Mason doesn’t have the breakaway speed that most home-run rushers possess. Don’t be fooled by the fact that he ran a 4.50-second 40-yard dash at the Scouting Combine; Mason isn’t nearly as fast with pads on. He won’t outrun any defensive backs in a footrace to the end zone, which should worry anyone planning to make him a featured back.

In terms of an NFL comparison, Mason is very similar to Seahawks running back Marshawn Lynch. Lynch may lack breakaway speed, but he’s a bruising rusher capable of wearing down a defense. The running back will succeed in a system that utilizes his ability to fall forward and gain chunks of yardage.

While Mason won’t be a first round pick, he has the skill set to become a playmaker at the next level. Though the running back is a bit undersized, having checked in at 5’8”, 207 pounds at the Scouting Combine, Mason runs as though he’s a lot bigger.

Mason shredded some of college football’s best defenses in 2013, which NFL scouts will recognize. It’s important to note that this running back ended his collegiate career by rushing for 164 yards on Alabama, 304 yards on Missouri and 195 on Florida State. In all three games, the opposing defenses were actively trying to slow down Mason and the rusher just continued to dominate.

In college, Mason had a nose for the end zone. He almost averaged two rushing touchdowns per game in 2013, which is an absurd total in a passing era. Mason will likely continue to rack up touchdowns in the NFL, as Lynch does.

I can’t imagine Mason riding the bench for too long at the next level. He’s the type of instant-impact player who may have already reached his personal ceiling. Whichever NFL team drafts him needs to get Mason on the field early on—he’s going to dominate. He’s a viable candidate to land in the second or third rounds.