Matt Hasselbeck spent his previous ten seasons tucked away in the Northwest corner of the United States. He often referred to it as “Southern Alaska,” to poke fun at the lack of national coverage his Seattle Seahawks teams received. Hasselbeck signed with the Tennessee Titans this off-season, and despite his new central location, is still flying under the radar. His 932 yards passing ranks as the second-best total through the first three games of any free agent quarterback in the last ten years. Only Drew Bledsoe’s 1017 yards in his opening series of games eclipsed Hasselbeck. 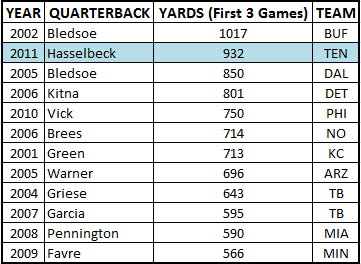 Bledsoe, like Hasselbeck, had just left a long stint (nine years) in New England when he got off to his fast start in Buffalo. Highly successful veteran free agent quarterbacks are not a common breed, but appear to be trending upward. Last year saw a near-MVP season from Michael Vick in Philadelphia. The year before was among Brett Favre’s finest seasons of his career in Minnesota. Drew Brees was an instant success in New Orleans in 2006.

What makes Hasselbeck’s fast start particularly interesting is the reason he changed teams in the first place. Vick was cast-off from Atlanta due to his off-field transgressions. Favre had been pushed out of Green Bay to make way for Aaron Rodgers, and then was shown the door by the New York Jets to make way for Mark Sanchez. Brees was allowed to leave San Diego because Philip Rivers was waiting in the wings. There was nobody pushing Hasselbeck for playing time in Seattle when he left. If anything, Hasselbeck was ushered out because of player not even on the 2011 Seahawks roster.

The combination of allowing Hasselbeck to go, and replacing him with Tarvaris Jackson, was among the most controversial and least understood in this rapid-fire NFL off-season. Pete Carroll’s logic was based on likelihood of injury, cost, and potential for growth. Jackson may not eclipse Hasselbeck as a quarterback, but he wins in those three categories. The thinking goes that the Seahawks will draft their franchise quarterback in 2012. Carroll has stated numerous times that he prefers to have his young quarterbacks follow the “Aaron Rodgers” plan of sitting behind a veteran for a few years before starting. That means the 2012 rookie is not likely to be the starter, and that Seattle will need a veteran starter for 2011 and 2012. The Seahawks also decided to blow up their offensive line and go young with a group that started the season with each player having never played a snap with the guy next to him. The chances that an aging Hasselbeck would stay healthy behind that line for multiple games, let alone multiple seasons, meant signing him to a two-year deal came with the very real risk another veteran would need to be signed in 2012. Hasselbeck was also twice the cost of Jackson, which left less money to spend elsewhere on a roster that needed to upgrade talent in many places. It leaves Carroll in an odd situation where he has actually downgraded the talent at the quarterback position due to the potential ramifactions of things, like injuries, that are not certain to happen.

Hasselbeck, meanwhile, is thriving behind a strong Titans offensive line. He developed quick chemistry with receivers Kenny Britt and Nate Washington. His future replacement, Jake Locker, is learning behind him on the sidelines. In perhaps the cruelest of ironies for Seahawks fans, the Titans are living out the quarterback situation many in the Seattle area had hoped for since Locker began attending University of Washington. Had the Seahawks lost their regular season finale to St. Louis last season, it just might have happened, as the Seahawks would have had the 8th pick the Titans used to select Locker. It will be years before Carroll’s gambit can be judged with clarity, but Hasselbeck is doing everything he can to make him regret it in the meantime.