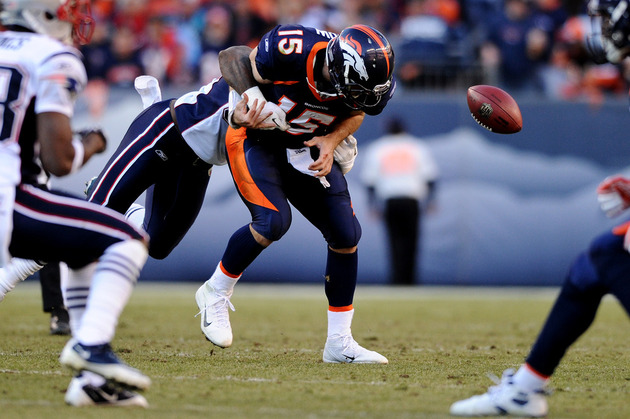 Without a doubt, this was the most hyped game of the weekend. After jumping out to an early lead, however, Tim Tebow’s house of cards fell apart. Simply put, Tom Brady illustrated why it’s so important to have a great passer playing the quarterback position.

The Broncos got their running game into high gear very early, orchestrating three scoring drives off the bat. Their defense also seemed highly energized by the great atmosphere at Mile High. Unfortunately for the home crowd, the euphoria didn’t last.

Tom Brady and Bill Belichick began methodically picking apart the Broncos’ defense with short, crossing patterns. Chad Ochocinco was even able to get in on the act with an early touchdown pass from Tom Brady.

The prevailing belief was that if the Broncos could keep the game close, they’d have a chance to win it late, but that just never materialized. They were never able to slow down the Patriots’ offense, and it was a rare case where Tebow never orchestrated a push to make a comeback.

The Patriots are now alone atop the AFC, if only for a few hours. The Ravens and Steelers can pull even with the Patriots with wins on Sunday and Monday Night Football.

The Broncos remain alone atop the AFC West as the Raiders were unable to hang on this afternoon against the Detroit Lions. The loss probably kills any chance of a wild-card birth for the Broncos, meaning they’ll need to win their division outright to make the playoffs. The loss also keeps the door slightly open for the Chargers, who play the Ravens tonight, to still make the playoffs as the divisional champion of AFC West.