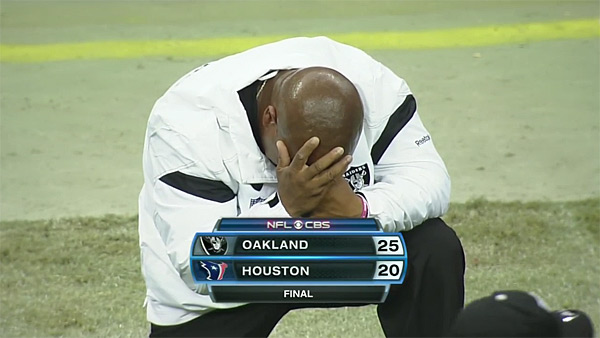 The proud silver gameday helmets were adorned with a simple black shield, with a two-letter tribute inscribed: “AL.” The Oakland Raiders were still processing the news, barely 24 hours old, that their iconic and seemingly immortal owner, Al Davis, had passed away. There hasn’t been time for a funeral, so this game would have to do.

The game wasn’t pretty, but funerals rarely are. Oakland arrived lead-footed and vacant, fighting through their own ghosts and emotion before realizing that they had to compete against a very good Houston Texans team as well. Matt Schaub had his way with the Raider secondary early in the game, but eventually the physical reality of this game shoved the emotional pain out of the way and the Raiders began to wake up. From the recap by Bret Armstrong at Thoughts from the Dark Side:

The Raiders defense looked dazed and confused until they came to life in the second quarter. It was like a tale of two defenses in this contest – once the Raiders figured out the Texans gameplan, they were able to almost completely shut down the potent Texans’ offense and force some three-and-out series against them.

It took longer for the offense to awaken, as Darren McFadden ran tentatively all day against a committed Houston defensive front, with his few good runs negated by penalty. But a couple of Al Davis favorites started to push the momentum in the Raiders’ direction. Sebastian Janikowski set a new NFL record with three field goals of 50 yards or more, two in the first half, and Darrius Heyward-Bey turned a five-yard out into a 34-yard touchdown scamper to give life to the Oakland sideline.

After halftime, the Raiders rode their emotional high to a series of scoring drives, putting 13 more points on the board and taking a 25-17 lead. But Houston would not let them enjoy the moment. Backed up on his own seven yard line, Matt Schaub willed his team downfield, but had to settle for a field goal. The Texans gambled on their defense and kicked away to Oakland with less than three minutes remaining in the game, and holding only one timeout.

All Oakland needed to do was get a first down, maybe two. But in classic Al Davis fashion, Jason Campbell refused to take the safe path, launching a deep ball to Denarius Moore on second and nine that, if complete, would have iced the game. But it whistled just past Moore’s outstretched fingertips. Oakland would punt, and Houston would get the ball back, down five, with two minutes to play. And the Raiders saw their tribute victory slipping away as Schaub carved up the field, bringing the Texans to the five yard line with just enough ticks on the clock for one last play.

The ball is snapped. Schaub rolls left and the field clears out in front of him, providing a wide-open lane to the end zone. Schaub scrambles, but safety Tyvon Branch’s spidey sense went off and he abandoned his man to shut off Schaub’s route. Cut off, and with only one receiver in the area, Schaub floats a prayer to Jacoby Jones. Michael Huff plucks the ball out of the air and falls to the ground, cradling the win as coach Hue Jackson and the Oakland sideline explode with pent-up emotion.

Jackson addressed his team after the game, and said, with tears still streaming down his face:

I know he loves you guys, like he loves this coaching staff and the organization. And that man … that was a hell of a job by you Michael Huff … but I tell you this, Al Davis had his hands on that ball.

A full remembrance will take time, but the Raiders paid tribute to Davis in the only way that they could: they just won. And that’s all he ever cared about.