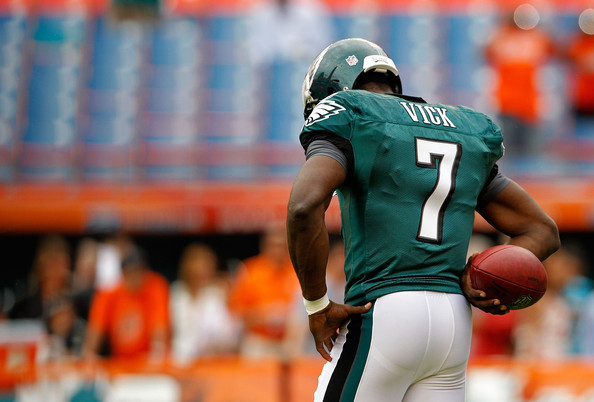 It’s one year into the new Michael Vick era in Philly after trading away Kevin Kolb and all indications point to the eagles making the right call.

So, the question before us is do the Philadelphia Eagles need to consider selecting a quarterback in the early rounds of the April 2012 NFL Draft?

By no means is quarterback the only need in Philly. They need help at linebacker and safety. And if they do indeed get rid of DeSean Jackson, they also are going to need to find another wide receiver.

Most likely picking in the middle of the draft this year Philly may have a chance to pick up a QB like Landry Jones and give him a year or so to watch and learn the NFL game the way Carson Palmer and Philip Rivers did.

But the Eagles need to think now about life after Michael Vick. And they need to think about when life after Vick will begin. He’s going to be 32 next June. They’re really only financially committed to him for one more season. For all intents and purposes, he really signed just a two-year commitment. He received $20 million this season and is guaranteed $12.5 million more next year and another $3 million in 2013. If they got rid of him after next season, they would only take a $4.2 million cap hit in ’13 and a $2.8 million hit in ’14.

He’s been everything you worried about when they signed him last summer. Inconsistent. Has turned the ball over too many times. Hasn’t been able to stay healthy.  Vick has shown this year as he has his entire career that he cannot stay healthy. If the Eagles are going to be serious contenders they need a QB who can go 14-16 games a season. Vick has not shown he can do this.

Only once in his career as a starting quarterback has Vick survived the gauntlet of a 16 game season, in 2006. Vick’s biggest asset is his speed and agility. Like with Chris Johnson, those tools separate him from the rest. Take those away and you have a 6 ft 200lb tackling dummy.

Assuming Baylor’s Robert Griffin III and Oklahoma’s Landry Jones come out along with Andrew Luck, there are going to be some very good quarterbacks available at the top of the draft. Griffin would be a particularly good fit for Andy Reid’s offense.

Regardless of how the rest of this season plays out, the Eagles likely will have the wherewithal to trade up and get one of them.

The Eagles already have an extra second round pick from the Kevin Kolb trade with Arizona. If they trade one of their cornerbacks, they will have even more picks to use to position themselves to get one of the draft’s top quarterbacks.

With the success the Cincinnati Bengals had paring A.J. Green with 2nd round quarterback Andy Dalton the Eagles could also wait and take a look at Ryan Tannehill. With Jeremy Maclin and LeSean McCoy already in place and locked up for the foreseeable future when eventually Vick is replaced the cupboard will not be bare.

Whether it is 2012 or a year or two down the line the Eagles need to have a plan in place. With the game Vick plays he is always one hit away from going from superstar to average. And that is something the Eagles or their fans can allow to happen the way it did to the Colts this year…because Andrew Luck is only coming out once.