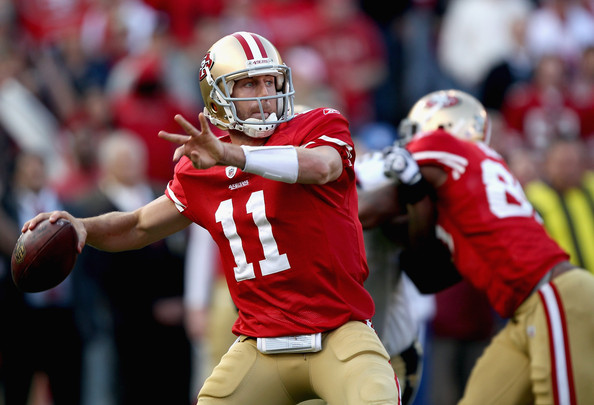 Alex Smith and the 49ers have kissed and made up.

The quarterback who helped the 49ers win the NFC West and reach the conference championship game has re-signed with San Francisco, according to multiple reports. According to ESPN, it’s a three-year deal worth $24 million. There was no immediate word on how much of that deal would be guaranteed.

After failing to lure Peyton Manning, it was important for the 49ers to get Smith back into the fold. Smith was coming off his best season and courted the Miami Dolphins and Seattle Seahawks while the 49ers pursued Manning.

Smith will have a few new targets this year as the Niners have already signed receivers Randy Moss and Mario Manningham.

After the 49ers’ dalliances with Peyton Manning, and quarterback Alex Smith’s corresponding free-agent visits, it seems that both sides have agreed to make nice … and make do. Matt Maiocco of CSN Bay Area confirmed a report from Michael Lombardi of the NFL Network, indicating that the 49ers have re-signed Smith. Before 49ers head coach Jim Harbaugh and offensive coordinator Greg Roman flew to North Carolina last Tuesday to watch Manning work out, Smith had been considering a three-year, $24 million offer from the team.

Because Smith hadn’t yet agreed to terms, the 49ers felt justified in going after Manning, an option that Manning seriously considered before agreeing to terms with the Denver Broncos on a five-year, $96 million deal. The speculation was that Manning wouldn’t sign with an NFC team because he might have to face brother Eli in the playoffs, but Manning refuted that claim when asked by the NFL Network’s Rich Eisen on Tuesday.

Once John Elway told Manning where to go, it was left for Harbaugh and the 49ers organization to clear up any miscommunication and hard feelings with Smith. Reports indicated that while Smith understood the team’s pursuit of Manning, he was less than happy to learn of Manning’s throwing session with team officials just before the news of that workout broke. In addition, Smith may be at his wit’s end with agent Tom Condon, who’s been rather busy representing that very same Peyton Manning fellow recently.

The Sacramento Bee reported that Harbaugh and Smith met for an hour on Monday to try and get everything smoothed out.

Smith, who threw just five regular-season interceptions in 2011 in a career year, helped the 49ers to a 13-3 record and a near-Super Bowl berth. Harbaugh was the key to his professional rebirth after six disappointing seasons. But the 49ers’ dance with Manning had Smith on a plane to Miami last Saturday, where he met with team officials and coaches for 5 1/2 hours. He was also considering an offer to visit the Seattle Seahawks before they pulled the trigger on a three-year, $26 million deal with former Green Bay Packers quarterback Matt Flynn.

In the end, the Dolphins signed ex-Jacksonville Jaguars quarterback David Garrard to a one-year deal, and Smith headed back home.