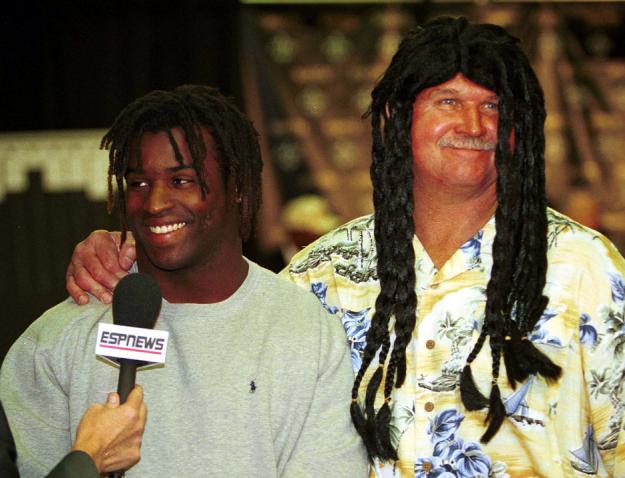 With all the hullabaloo over the Washington Redskins trade with the St. Louis Rams this week it is as good a time as any to look back on some of the best trades to go down in the NFL. While it remains to be seen if and how the “Robert Griffin III for a whole lotta picks” trade will work out for either side. The three most likely scenarios are: (1) Robert Griffin III takes the Redskins to Super Bowl glory and all is forgotten about their 2 year absence from the NFL Draft’s 1st round; (2) The Rams use their Herschel Walker-esque haul and re-build the Greatest Show on Turf, or (3) RGIII fails to live up to expectations and the Rams piss away their golden opportunity to save their franchise.

If the first two scenarios play out even close to their potential this will be remembered as a win-win for both sides. Even if only one side comes out a winner it will surely find itself on lists like this in the future.

There have been plenty of trades throughout the history of the NFL.  Here are some of the biggest from the modern era. Two notes, biggest does not necessarily translate to most successful, and keep track of how many involved quarterbacks.

New York Giants Get Their Manning

Entering the 2004 draft, many analysts rated Ole Miss’ Eli Manning as the top QB available. San Diego, holding the top pick, needed a quarterback, but Manning had already declared that he wouldn’t play for the Chargers if they selected him.

The Chargers managed to turn the situation to their advantage, arranging a trade in which they selected Manning, then sent him to the Giants in exchange for New York’s own just-drafted QB (Philip Rivers) and two draft picks.

New York got their man, and Manning has led the Giants to two Super Bowl wins already. San Diego, however, may have gotten the better of the deal. In addition to landing Rivers, who has three Pro Bowl selections to Manning’s one, the Chargers used their extra picks to draft two other future Pro Bowl performers, LB Shawne Merriman and K Nate Kaeding.

Entering the 1990 draft, Jeff George looked like a can’t-miss prospect. The rocket-armed Illinois QB impressed the Indianapolis Colts so much that they paid a steep price for the right to draft him.

In exchange for Atlanta’s No. 1 overall pick, Indy sent tackle Chris Hinton (a six-time Pro Bowler) and wideout Andre Rison (who would go on to make the next four Pro Bowls) to the Falcons, along with their own first-round pick.

George struggled so badly that Indianapolis would pick first overall again just two years later, having finished 1-15 in 1991. Hinton gave the Falcons four solid years (including one more Pro Bowl berth), and Rison became one of the leading receivers in franchise history.

John Elway Forces His Way out of Baltimore

The Baltimore Colts used the first pick in the 1983 draft to solve their quarterbacking problems by drafting can’t-miss Stanford star John Elway.

There was just one small difficulty: Elway, who also had an offer of a pro baseball contract with the Yankees, had no intention of playing for a team as wretched as the Colts.

Faced with the prospect of getting nothing in return for their pick, the Colts finally traded Elway’s rights to Denver, getting backup QB Mark Herrmann, the rights to tackle Chris Hinton and a first round pick in return.

Herrmann would spend just one season with the Colts, backing up Mike Pagel. Hinton made six Pro Bowls before being traded to Atlanta.

And John Elway was John Elway, so the Broncos still came out ahead on the deal.

That the New Orleans Saints wanted to acquire star RB Ricky Williams in the 1999 NFL Draft was no surprise. The surprise was that they wanted him to be their 1999 draft.

New Orleans traded all six of their selections in the draft to the Redskins, who held the No. 5 overall pick that became Williams.

Washington traded away many of the picks acquired in the Williams deal, but did get Pro Bowl LB LaVar Arrington with one of them. Williams, meanwhile, played three good but not great seasons in New Orleans before being traded to the Dolphins (for four more draft picks) and having his breakout season there in 2002.

Heading into the 2001 NFL Draft, Virginia Tech QB Michael Vick was the consensus No. 1 pick. Atlanta, picking No. 5, knew they had no shot at Vick unless they traded up.

San Diego held the Falcons for ransom, getting the No. 5 pick, two other picks and WR Tim Dwight in exchange for the top selection.

Vick turned the Falcons into playoff contenders before his career was put on hold by his arrest for running a dogfighting ring. San Diego, meanwhile, used Atlanta’s No. 5 selection to take Ladanian Tomlinson, who in turn, would help make them into a playoff team.

You knew it was coming.

The biggest, most famous trade in NFL history was the one that built the Cowboys’ dynasty of the 1990s. From a losing team with a Pro Bowl running back in Herschel Walker, the Cowboys became three-time Super Bowl champs.

In 1989, the Vikings thought Walker was the last piece they needed to reach the Super Bowl. Accordingly, they were willing to pay whatever Dallas wanted to get him.

Nelson refused to report to Dallas, so he was traded to San Diego for yet another pick, which went back to the Vikings.

The Cowboys used the Walker picks to draft Alvin Harper, Dixon Edwards and Darren Woodson, all key starters on their Super Bowl teams. Another pick was part of a trade up in the 1990 draft to pick Emmitt Smith.

Minnesota made the playoffs with Walker in 1989, but got slaughtered by Joe Montana’s 49ers. After two more seasons of mediocre play from Walker, who never fit Minnesota’s offensive schemes, he was released.

The best thing to come out of the trade for Minnesota was that one of the draft picks they acquired turned out to be long-time WR Jake Reed.