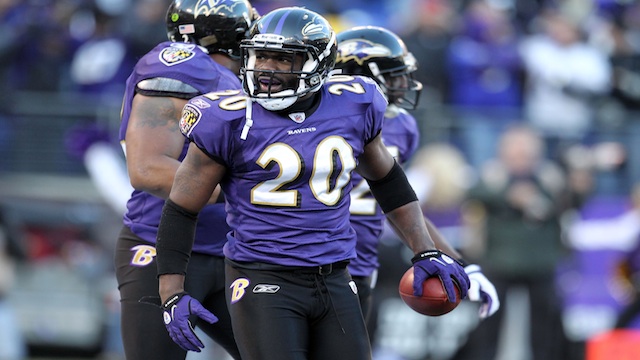 The Ravens were a dropped Lee Evans pass away from a trip to the Super Bowl to play the New York Giants. That kind of heartbreak has to give you the drive to take one more shot at the big game.

That’s why I’m not remotely surprised that Ed Reed is preparing to return to the Ravens again in 2012 according to Ravens GM Ozzie Newsome, putting retirement off for at least one more season.

Reed is not “old” by any stretch of the imagination. At just 33 years of age, Reed is still considered to be one of the game’s best safeties, and he’s gained a reputation as a ball hawk, intercepting 57 passes over the course of his career.

Still, Reed has had health issues that will likely force him out of the league a few years before he’d like to leave. Reed has been contemplating retirement for a few years now, coming very near calling it quits back in 2010. He’s had nerve problems in his neck before, and they nearly derailed his career. One has to believe that his neck has played a large role in his long-term decision making.

In speaking with reporters at the NFL combine, Newsome said, “He told John [Harbaugh] that he’s going to get himself prepared to come back and play in 2012.”

Reed is one of the hardest safeties in the league to account for by offensive coaches. He has an uncanny ability to stay near the ball at all times, often coming out of nowhere to intercept a pass or lay a jarring hit on the ball-carrier. The news should be celebrated in Baltimore since he’s one-of-a-kind, and you don’t simply replace one-of-a-kind players.

Despite the Ravens’ run to the AFC championship game, Reed did not have a good year by his standards. He intercepted just 3 passes all season despite playing in all 16 games. The only time he’s intercepted fewer passes in a season throughout his career came in 2005 when he only played in 10 games.