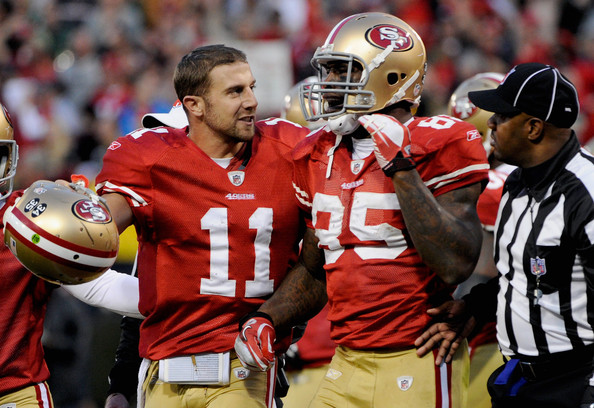 As crazy as it may seem, we’re only about a month away from real football being played. Let’s talk about the NFC West.

Projected Winner: San Fransisco 49ers. Almost by default really, the rest of these teams could be really, really awful.

“X” Factor: Aldon Smith: whether or not he returns to rookie form will be huge in determining just how far this team can go and may be the difference between a playoff berth and missing a chance to kick the rest of the division while it’s down.

Arizona Cardinals: Right off the bat, the William Gay signing looks strong. He was really under the radar in 2011 and also really good. His WPA+, a stat formulated by Advanced NFL Stats that measures a defensive player and the extent that he increases the probability of a win by being on the field, had him ranked as the ninth best cornerback in the NFL and the Cards are paying him $975k in 2012. Not a bad deal at all. They mostly went BPA in the draft and ended up with three offensive linemen and Michael Floyd, an absolute beast who should produce next to Larry Fitzgerald. Still, it is hard to move past the whole “Kevin Kolb is their quarterback” thing. In fairness to Kolb, he was hurt a lot last year, but I think they’d be really smart to at least consider picking a QB next year, maybe Landry Jones or Tyler Bray if he ends up coming out. Barkley would be the ideal fit, but I would bet my house that he goes number one overall next year and I don’t think the Cardinals are quite that bad. I still don’t trust Kolb to get them more than about six or seven wins tops.

San Fransisco 49ers: As impressive as they were last year, and most are still picking them to coast through this division, but the Niners are going to be very beatable by other playoff teams. They put points on the board against a crappy Saints defense in last year’s divisional round, that doesn’t prove anything to me. I personally think they’d be hard pressed to repeat a regular season like last year’s. 12 wins seems like a realistic goal. I think they could scratch out 12 wins, but they won’t look dominant like they looked last year. Aldon Smith needs to be amazing again. Michael Crabtree needs to step up his game even further and continue making progress, Vernon Davis needs to be Vernon Davis, and Alex Smith needs to be better than mediocre. If Alex Smith improves, this is suddenly a dangerous team. If he doesn’t, well, there’s always Colin Kaepernick.

Seattle Seahawks: Every year so many fall in love with this team and every year they disappoint. Ever since Marshawn Lynch’s beast mode run against the Saints a couple of years ago, I’ve been waiting for this team to take another step forward, but they really just can’t seem to get that QB position settled. Is Matt Flynn the answer? My guess is probably no. I look at him the same way I look at Kevin Kolb right now: he’s looked decent in mop-up duty and flashed brilliance in spot starts, but I won’t trust him until he’s shown that he’s good enough to improve an otherwise terrible team. Kolb failed last year, but Kolb has a noodle-arm, Flynn has better measurables and probably should be better, but I’m not holding my breath for this guy to set the league on fire.

St. Louis Rams: Depressing to watch on TV and even more depressing in person. There’s nothing worse than football indoors, especially in a gorgeous city like St. Louis. I’m constantly amazed Busch Stadium doesn’t get more love for it’s awesome skyline view. Upgrade this mess immediately. Same goes for the team. They have some good individual players in key positions like Stephen Jackson, Sam Bradford, Chris Long, and James Laurinaitis, but the lack of receivers, among other things, and the very presence of Chuck Cecil, among other things, might make this team a doormat.

All in all, this is still a pretty is a weak division. The Niners should be good enough to coast through, but there will be stiffer competition from top to bottom thanks to a resurgent Sam Bradford and improved QB play from the Seahawks (can’t get much worse than Tavaris Jackson). The Cardinals are a bit of a mystery to me. They have the makings of a decent football team if they could get Kevin Kolb to resemble the player he once looked like he would be in Philadelphia with the Eagles. I also believe that Larry Fitzgerald can carry a team. Despite this though, I fully expect them to suck in 2012. My “bold prediction” is that the Niners end up losing maybe two games within their division this year. It’s just too easy of a schedule for a team like that to have much trouble with