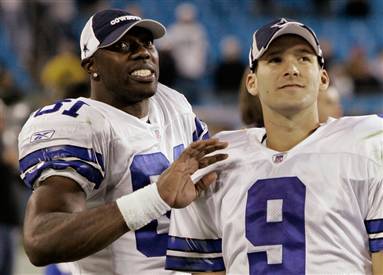 Terrell Owens is one of the most controversial receivers to ever play in the NFL. When he sits down to talk, not only do we listen, but we try to poke and prod him in controversial directions that make for a good show.

In an interview with ESPN Dallas’ Ben & Skin show, Owens was asked about Tony Romo, but Owens was reluctant to answer. After some pushing, Owens let loose his latest jewel in a seemingly endless list of one liners and soundbytes.

“With that situation, dude, I’ve kind of lost my respect for that situation. Man, that’s a guy I shed tears for, I went to bat for. Then obviously, ultimately I’m not in Dallas anymore and I know he definitely had a hand in that. So, again, it’s one of those things that you kind of just have to bite your tongue and keep moving on, you know what I mean?

I just happened to be one of those guys that really voiced my opinion. I wasn’t the only one who thought that way. There were games that other guys were open. I wasn’t saying that to get the ball thrown to me a lot more times, I was all about winning — I think if you really ask my teammates that they’ll really convey that and they’ll tell you honestly that’s what I’m about.”

It’s no secret that Tony Romo and Terrell Owens parted on less than ideal terms, but the fact that Owens is still talking about it is somewhat surprising. Of course, we have to credit Owens for holding off on his comment if only for a moment. Owens is a very capable veteran receiver, and I’m not sure that he’s the same poisonous receiver that he once was.

Owens Tony Romo comments weren’t the only significant tidbits of the interview. Earlier in the show, Owens indicated that he thought he’d be back on the field in the NFL in 2012.

“I know I’ll be somewhere during the course of the season, it’s just a matter of playing this waiting game and staying in shape. I know I’m capable of playing this year.”

I don’t know many fans that would be against seeing Owens give a championship run one more shot. It makes for great storylines, great TV, and great interviews following games. I’m hoping a team finds room on their roster to sign him. It just takes one team to make a run at Owens, and he wouldn’t likely be very expensive. There’s only one thing that seems truly clear with Owens comeback attempt. He’s not heading to play for the Cowboys anytime soon.