Although you'll likely see some form of this debate on a variety of ESPN shows and articles, we thought it would be best to check with bloggers representing the three lead candidates so that they could make their case as to why their signal caller is worthy of the distinction of rookie of the year. Who do you think is most deserving? Chime in with your thoughts in the comments. 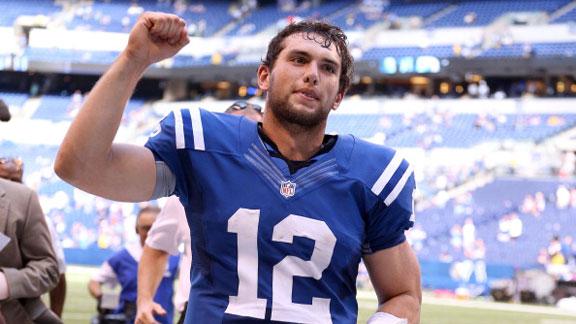 The case for Andrew Luck as Rookie of the Year is a strong one. In fact, if this were any other year – or, in my opinion, if Luck played in almost any other NFL city – there likely wouldn't be a need to make this case at all.

Let's start with the obvious, easy stuff: on Sunday, Andrew Luck broke the rookie record for passing yards with 4,183 (previous record was 4,051, Cam Newton), he continues to set the record for number of wins by a rookie QB selected first overall in the draft, and he broke the record for number of game winning drives by a rookie QB with 7 (previous record was 6, Ben Roethlisberger). The voters love records, and Luck's breaking a lot of them, all while dealing with the pressure of following in the footsteps of one of the greatest quarterbacks in NFL history, Peyton Manning.

The case doesn't stop there, however, and the deeper you look, the stronger it gets. I'm the last person to push "QB wins" as a real stat, but you can't help but be amazed by what Luck has been able to accomplish – owning the largest turnaround lead by a rookie in NFL history, taking the Colts from 2-14 to at least 10 wins – with this roster.

In fact, a position-by-position analysis of the Colts roster should lead you to the conclusion that the only position to hold a significant upgrade over their 2012 counterpart is at quarterback. The rest of the roster is filled with either veteran journeymen, inconsistent rookies with a lot of upside, or Reggie Wayne, Antoine Bethea, and Robert Mathis.  So, while "QB wins" aren't a thing, Andrew Luck's effect on this roster is real – and spectacular.

Now, let's move to the meat of the discussion. The case against Andrew Luck seems to revolve around two stats: interceptions and completion percentage. My biggest pet peeve with stats is people who use them without context., so let's provide some context for Luck's. It's true that Luck has thrown a lot of interceptions (18) and has a pretty poor completion% (54.3). Here's what else is true: Andrew Luck has set the rookie record for pass attempts in a season with 599, and will likely become just the 14th player in NFL history to attempt 600 or more passes in a season. The high volume of passes alone would be enough to account for his jump in interceptions and drop in comp%, but let's also take into account the fact that Luck leads the most vertical passing offense in the NFL: his passes travel further in the air, on average, than any other QB in the NFL. In other words, Bruce Arians and the Colts coaching staff have done Luck no favors. There are no simple reads, no easy passes, Luck was thrown into the deep end without a life jacket or those cute little water wings and told to swim.

Still not convinced? Let's take a look at Luck's supporting cast. First, there's the offensive line, whose ineptitude has forced Colts fans to begin the process of legally changing his name from Andrew Luck to Andrew hits as he throws. Depending on which Advanced Metric you read, Luck is the most pressured QB in the NFL. He's the 4th-most sacked QB in the NFL (40). His offensive line consists of one good (or better) player, LT Anthony Castonzo, and then the following superstars: LG Joe Reitz, C Samson Satele, RG Mike McGlynn, and RT Winston Justice. That starting 5 would be bad enough, but it doesn't stop there, as injuries have held Reitz, Satele, and Justice out of a number of games, allowing prodigies such as Seth Olsen, Jeff Linekbach, and AQ Shipley to play significant time. It's hard enough being a rookie QB in the NFL. It's even harder running one of the most demanding vertical passing attacks in the NFL. Now try doing both while being harassed repeatedly by opposing defensive linemen.

So the offensive line is bad, but what about the rest of the offense? Here are Luck's targets, and how they rank according to FootballOutsiders.com's DVOA:  Dwayne Allen (10th, tight ends), Coby Fleener (33rd, tight ends), TY Hilton (40th), Reggie Wayne (46th),  and "#2 WR" Donnie Avery (76th). GM Ryan Grigson has had a nice start on his quest to rebuilding the Colts, but on a roster with nearly 70% turnover, it's going to take time to surround Luck with talented, consistent receiving weapons.

Then there's the running game and defense: the two areas of a team that can take the most pressure off of a rookie QB also happen to be the two areas where Luck's competitors – Seattle's Russell Wilson and Washington's Robert Griffin III – enjoy their biggest advantages over Luck. On the ground, Wilson is supported by the #2 rushing attack in the NFL, gaining an amazing 161.7 yards-per-game on the ground, while Griffin III has it even better, supported by Washington's top-ranked rushing attack, where the Redskins gain an eye-popping 162.3ypg. And before anyone says that those numbers are due to the rushing ability of Wilson and Griffin, consider this: Seattle's Marshawn Lynch is 2nd in the NFL in rushing (1,490 yards) and gains 5.0 yards-per carry, while Washington's Alfred Morris is 4th in the NFL in rushing (1,413yards) and gains 4.7ypc. How do the Colts do on the ground? 22nd in the league, with 106ypg, and their leading rusher, Vick Ballard, is 23rd in rushing with 736 yards and 4.0ypc.

Russell Wilson and Robert Griffin III have had amazing rookie campaigns. Like Luck, they'd be a shoe-in to win the rookie of the year award in just about any other season. But when you look at the entire picture: stats, supporting cast, what each player has to do, and, yes, the situation they were put into – following Manning and living up to those expectations can't be overlooked – Andrew Luck is the obvious choice. 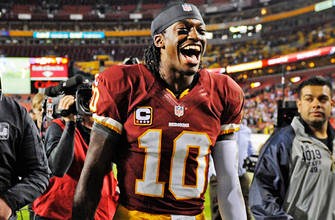 The argument for Robert Griffin III for Rookie of the Year is best shown by his impact on the Redskins' defense, and the best statement was made by CB DeAngelo Hall. Thanksgiving Day, Redskins at Cowboys, with Washington ahead by seven points and 18 seconds in the game, Hall receives Dallas' onside kick and returns it 42 yards with an unobstructed path to the goal line and another Washington score. He slides to kill the ball on the Cowboys' two.

Washington's defense wants the ball in RGIII's hands so they too can see what jaw-dropping thing he does next. More proof that in Washington, a strong offense is the best Redskins defense…because the Redskins need the defense off the field as much as possible.

Football smart guys projected the Redskins to win as few as three games this season. They might win the division with a 10-win record. If the Redskins beat the Cowboys Sunday night, RGIII will be ROY by Monday afternoon.

Russell Wilson deserves to be the 2012 Offensive Rookie of the Year.  Don’t get me wrong, both Andrew Luck and Robert Griffin III are worthy candidates, but by virtue of their status as the first and second overall picks they were always going to be in the running for the award as long as they put up halfway passable stats.

Wilson, on the other hand, wasn't’t guaranteed a starting job, and he most definitely didn't’ receive enough hype to make him a Rookie of the Year favorite before he’d even been drafted.  Because of his height (slightly under 5’11”), Wilson didn’t come off the board until the Seahawks took him on day two with the 75th overall pick.  Seattle already had two quarterbacks they liked on the roster, Tarvaris Jackson and Matt Flynn.  Many rookies headed into that same situation would have taken a glance at Jackson’s popularity in the locker room and Flynn’s fat new contract, shrugged their shoulders, and quietly accepted their presumed role as the third-string developmental QB.

Instead, Wilson’s performance in practice forced the coaching staff to give him a shot at winning the job, and win it he did.  An unfortunate side effect of the competition was Wilson’s slow start to the season (unlike Luck and Griffin, Wilson didn’t get an entire offseason’s worth of practice snaps with the first string offense), but since those first few weeks of the season he’s been one of the hottest players in the league.

Comparing his 2012 season to the greatest rookie QB performances in NFL history1, Wilson more than holds his own.  Wilson trails Peyton Manning’s rookie record of 26 passing TDs by one (25), and he’ll have a prime opportunity to surpass him when Seattle plays its final regular season game versus St. Louis.  And just in case you think he managed that by throwing a ton of passes, Wilson’s touchdown percentage is 6.68%, good for fifth on the all-time lists. Wilson has just 374 passing attempts on the season (one less than Griffin's 375 and nowhere near Luck's 599), good for 26th in the league this year and 10th on the all-time rookie list. Add in his three rushing touchdowns and his total rises to 28, good for second all-time behind the inhuman 35 TDs Cam Newton scored last year.

Granted, Griffin has thrown just five interceptions this year as compared to Wilson’s ten, but that evens out somewhat when you consider that Griffin has committed twelve fumbles (Wilson has five).  So, while Griffin may have the edge in a straight ratio of passing TD to interception (4:1 versus Wilson’s 5:2), Wilson comes out on top in a ratio of all TDS to all interceptions and fumbles (28:15 versus Griffin’s 26:17).  That last ratio is strong enough to put Wilson in fourth place on the all-time lists behind three Hall of Famers, Otto Graham, Y.A. Tittle, and Dan Marino.

The main knock I’ve heard regarding Wilson, aside from his more pedestrian performances earlier in the season, is that he has the luxury of being on a team with plenty of talent on offense, defense, and special teams, while Griffin and Luck have had to do more with lesser supporting casts.   That’s a fair point, but the Seahawks roster Wilson joined this year is not all that different from the roster that Jackson and Charlie Whitehurst quarterbacked to a 7-9 record in 2011.  With Wilson under center, Seattle recently became the first NFL team since 1950 to score 50+ points in back-to-back games — not bad for a third-rounder who was supposed to be too short to play in the NFL.

1 To keep things manageable, I only looked at players who 1) passed for at least 15 TDs and 2) played their rookie seasons for a team in the NFL or one of the two pro leagues that eventually merged with the NFL (the AAFC and AFL IV (1960-69)).  Sorry, USFL, XFL, WFL, and AFLs I-III, but I’ve got me some holidays to enjoy.

Compelling cases with a week to go. Who do you think deserves the hardware?

Copying and pasting my Twitter bio. I'm also refusing (for now) to write this in the third person. This is me - CEO of @Bloguin, GM at @AwfulAnnouncing, world's greatest chinese jew, proud Buckeye, funny dude, and sports and digital media zealot.