1. When will Tim Tebow start for the New York Jets?
If you believe that Jets owner Woody Johnson signed Tim Tebow just for the wildcat offense, then there's a bridge down the street he wants you to buy, too. No. The Jets signed Tebow to light a fire under Mark Sanchez. Sanchez wears asbestos underpants. If he feels the heat, he's not showing it.

Mr. Sanchez profiles as a steady worker who makes marginal improvements year-by-year, like the tortoise racing the hare, or like Eli Manning and the Giants. The Jets are impatient. Losses to the Bills, Steelers, 49ers and Texans will stoke the flames. With any luck, the Colts can upset the Jets and that will do it for Sanchez. Look for Tebow to start Week 7 against the Patriots. Count on it. The only question is where will Sanchez play under his second NFL contract? It's only fifty-fifty that he will be in New York.

2. Will six playoff teams emerge from the North?
The NFL's toughest divisions are the AFC and NFC North. The AFC Northerners sent three teams to the post-season in 2011. They have the muscle to do it again, but in facing the rugged NFC East, are unlikely to win post-season home field advantage.

The race for their NFC counterpart is much tighter with the improved Chicago Bears and another year for Lions players to learn the difference between undisciplined mayhem and irresistible force. if they figure that out, Detroit will be irresistible. The NFC Northerners have the easier path playing the still wimpy NFC West and with two of the divisions stadiums under cover. 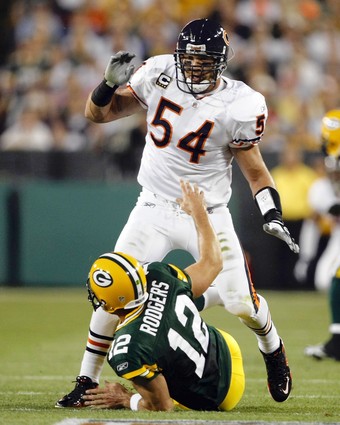 3. Will the Bears top the Packers for the division title?
No team helped itself more than Chicago this offseason. The Bears signed a legitimate beast in WR Brandon Marshall to be Jay Cutler's go-to target, and they signed RB Michael Bush to share the rushing load with Matt Forte. Jason Campbell assures da' Bears won't fall off a cliff like last year if Cutler misses significant game time. Chicago is still potent on defense, more so if LB Brian Urlacher is healthy. The 2012 Bears are built to take the Packers down.

Green Bay is the NFL's most potent offense due to the remarkable Aaron Rodgers. Rodgers and the Packers are something of frauds. They are front-runners. We don't sniff at their ability to build insurmountable leads, but when those leads are surmounted…. Cold, Hard Football Facts pounds the fact that Rodgers is worse at overcoming fourth-quarter deficits than Tony Romo (who is not nearly the choke artist detractors say). Green Bay is so used to sitting atop big leads that they've lost the skill for come back wins. Chicago has the scoring potential to keep pace with Green Bay and the defense to make the Packers earn it late in games. Buckle your seat belts. This is going to be good.

4. Which rookie quarterback starter belongs with the elite? Russell Wilson
I am an old-school fan who loved real football – that brand of snot-knocking, concussion-inducing downfield offensive display of naked power. So, I've been slow to admit that 21st-Century football is a pass-first game. Even I can't deny that the Millennium opened a golden age of quarterbacking unparallel in NFL history. (Did I write that? Excuse me while I take a sedative.)

The quarterback class is 2012 may be the most impressive. Five of their number, Andrew Luck, Robert Griffin III, Ryan Tannehill, Brandon Weeden and Russell Wilson won the starting job. All but Wilson won the job by default by landing on terrible teams. Indianapolis won the Suck for Luck sweepstakes, but Indy, Miami, Washington and Cleveland combined for a mere 17 wins last season. The only expectation for their rookie starters is to do better than the men they are replacing.

Russell Wilson is the break-through rookie. He is almost as athletic as Griffin 3rd, and nearly as pro-ready as Luck. Wilson spent last season in the Wisconsin Badgers' pro-style offense facing rugged Big Ten defenses. The Seahawks are a stronger team than others that are starting rookies, and Wilson twice gets St. Louis and Arizona on the schedule. That's almost unfair.

Wilson will not join the elites and near-greats as a rookie, nor will he be a Newton-like rookie sensation. He will lead the Seahawks to year-over-year improvement and have the most to show for his effort. That makes him best of the lot.

5. Can the Super Bowl Giants win their division?
When the Dream Team slipped into a nightmare season, the New York Giants, the league's most well-rounded team, made a late rush to the playoffs to face their favorite Super Bowl opponent, the New England Patriots. So who's the favorite to win the NFC East? Why, the Eagles, of course.

Philadelphia is loaded. Fervor for them waned when Michael Vick was twice injured in preseason games. Now, he is outfitted with a bullet-proofed vest and he promises, once again, to play smarter ball. That would call for Vick to throw the ball away when his receivers are covered instead of inviting big hits by running forward. It means sliding feet-first instead of leading with his head for that third-down conversion.

Reckless play is Vick's greatest appeal, and why few believe he has changed. The Eagles best shot to be Beasts of the East is with a complete season from Vick whose legacy rests with his passing, not his running, abilities. The Eagles get the nod if Vicks figures that out. That's the point. The Giants' defense of their division crown rests as much on Michael Vick as on anything they do for themselves.

BONUS: What do we call the last Sunday before the regular season?
Yesterday was the last Sunday before the Super bowl without a real NFL game. The anticipation is unbearable. The occasion calls for a catchy name, something like Suspension Sunday, or Sunday Silence (also a famous race horse), or Eye of the Storm. It's not like the NFL to miss a chance to hype a non-event and sell more NFL caps.