Quarterbacks shouldn't be judged by wins and losses.

Football's a team game, and we are rarely, if ever, aware of the career win-loss records for running backs, safeties or linebackers. Therefore, it's pretty reasonable that quarterback "wins" shouldn't be considered a true indication of a specific quarterback's performance. The "he's just a winner" narrative occasionally used to describe a quarterback like, um, Tim Tebow, is even worse, a theory as ridiculous as the sentence itself is lazy.

All that makes sense to me, and I'm fine with well-followed and highly respected NFL media members taking to Twitter to display their staunch stance against wins and losses as a "quarterback statistic."

Wins and losses are not a quarterback stat. This has been a Public Service Announcement.

While I'm on board with this "theoretical movement," it's not perfect.

Essentially, this column is my counter to a football theory I mainly agree with, just not the perceived flawlessness of it. Furthermore, I'll explain how and when quarterback wins and losses can actually be rather telling and useful.

First off, everyone agrees that the quarterback is the most important position in the game. It's probably the lone football theory on which there's no disagreement.

In almost every instance, a "rebuilding" organization turns to a quarterback to begin its franchise reconstruction. How many "elite" quarterbacks—pardon me for using that highly controversial term—play on bad teams?

Think about it. Not many.

Going a step further, who's the best quarterback to just fall on hard luck his entire career and play on consistently bad teams?

After some research, Sonny Jurgensen or Vinny Testaverde seem like decent answers.

I actually posed this question on Twitter a few days back, and the most popular answer was Archie Manning. I'm thinking that was because of his kids. Sure, he quarterbacked some atrocious New Orleans Saints teams, but 125 touchdowns, 173 interceptions, a career completion percentage of 55.2 and quarterback rating of 67.1 say to me that Archie wasn't very good.

Quarterback wins and losses are currently the most beneficial if we step back and look at them from a broad perspective with a large sample size. 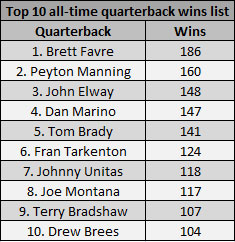 OK, so Bradshaw is sticking out like a sore thumb. The guy was lucky enough to play for, not against the Pittsburgh Steelers "Steel Curtain" defense in the 1970's and won a bunch of games (and Super Bowls) despite the fact that he threw only two more touchdowns than interceptions as a professional and had a career completion percentage of 51.9.

The rest of that group looks pretty good. 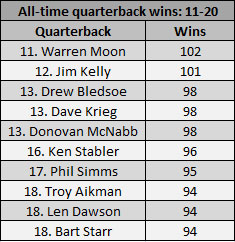 Bledsoe certainly isn't the 13th-best quarterback in league history. The same goes for Krieg, McNabb, Stabler and Simms in regard to their corresponding ranking on the win-total list.

However, most could probably get behind Moon, Kelly, Dawson and Starr as four of the Top 20 quarterbacks of all-time.

Because building and sustaining a totally well-rounded, superbly complementary team are incredibly hard things to do in the NFL, in very many cases, those bad or mediocre quarterbacks lose their jobs and ultimately fall well short in the win column.

In the end, if you're trying to use one statistic to conclusively judge a quarterback, you're doing it wrong anyway. No, QB rating isn't even close to being perfect. ESPN's QBR is a step in the right direction, I guess. To me, game-winning drives or fourth-quarter comebacks are the two best "single stat" judges of quarterback performance. But they have their flaws as well.

A quick example—Geno Smith completed one pass on his "game-winning drive" against the New England Patriots in Week 7. Eh. Remember, context is always key.

Fortunately, I think we're in a fast-moving transition period regarding the reputation of quarterback wins as a statistic. The quarterback has rapidly become the unquestioned focal point for nearly every team in today's NFL. That wasn't the case in the days of the 30-carry-per-game running back. In 1993, Steve Young, Moon, Favre and Elway completed 300 or more passes. In 2003, 10 quarterbacks did. In 2012, 18 did, and six completed more than 400 passes.

Basically, with more quarterbacks doing more for their respective teams—and the shift in offensive emphasis doesn't appear to be changing anytime soon—in the future, we'll become somewhat comfortable using quarterback wins and losses as a more specific indicator of how a quarterback performed in his career.

In say, 15 years, I bet quarterback wins and losses will be seen in a much different light.

Chris Trapasso has been publishing his NFL-related opinions, rants, theories, philosophies and commentary since 2008 when he joined Bleacher Report during the site's infancy. He was the first Buffalo Bills Featured Columnist for B/R when the FC program began in 2009. Chris had a variety of jobs until he was added to the full-time NFL beat writing team at the beginning of the 2011 season. Brad Gagnon brought him onto This Given Sunday's staff in October of 2013. He was credentialed for and attended the 2014 Senior Bowl in Mobile, Alabama. Chris is based in Western New York and currently a free-agent writer. (HIRE HIM, he's scrappy.) Beyond B/R and TGS, he's written for Yahoo Sports, rotoViz, BuffaLowDown, BuffaloSportsDaily and is featured on sports radio shows and podcasts in the Buffalo area.