The final stupid weekend of what was an extremely stupid NFL regular season. I mean, they're all pretty stupid, but this one certainly felt more stupid than usual. Bad calls, bad coaching, bad penalties. Just stupidity all around. Let's summarize for Week 17…

With playoff implications in play, Leavy's crew had a rough go in the late moments of the Chiefs-Chargers game. The first example wasn't necessarily a bad call, but it was still poor officiating because Leavy's crew didn't perform their due diligence.

Deep in their own territory, the Chargers snapped it to Eric Weddle on a fake punt on 4th-and-2. Weddle apparently gained the first down before he fumbled, leading to a Kansas City touchdown. It was ruled by Leavy's crew, though, that his forward progress was stopped before he coughed it up. Again, might have been the right call on a bang-bang play, but why wasn't first-down yardage reviewed? And why was no explanation given? This was a play that had major implications and merited an extra look, but Leavy and Co. ignored all of the options put in place for them to get these calls right.

But that game might not have even gone to overtime had Leavy's crew noticed that the Chargers had an illegal formation with seven men on one side of the ball when Ryan Succop missed what would have been the game-winning field goal late in the fourth quarter. 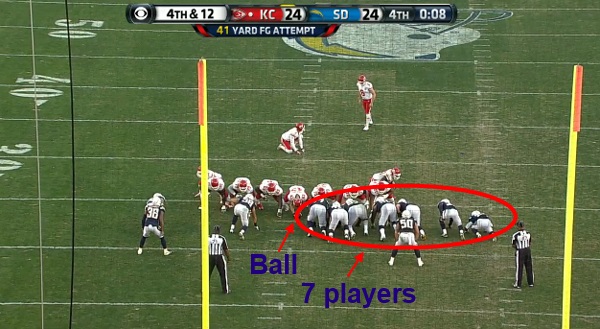 From Peter King of the MMQB:

The worst part of this: Two officials—who appear from the tape to be side judge Keith Parham and umpire Ruben Fowler—were staring straight at the line from behind the Chargers rushers before the snap of the ball. They had to see the seven Chargers on the line to the right of the ball, which is illegal. Teams can have only six men on either side of the ball when it is snapped on a field-goal try.

Had a flag been thrown, Succop would have had another chance from only 36 yards out. In his career, he's an 85-percent kicker from that range. Had the kick been made, Pittsburgh would be the No. 6 seed in the AFC, rather than San Diego.

Steratore doesn't get mentioned here very often because he's a damn good referee. But Sunday night, he overlooked something that could have cost the Cowboys their season. The play clock operator mistakenly gave Dallas only 25 seconds, rather than 40, after a 34-yard completion to Jason Witten in the fourth quarter. It was obvious the Cowboys didn't have enough time, but Steratore blew the play dead when the clock hit zeros and gave them a five-yard delay-of-game penalty anyway.

NBC's Cris Collinsworth and Al Michaels noticed immediately that something wasn't right, but nobody on Steratore's crew did. And the Cowboys never protested. Shockingly stupid. 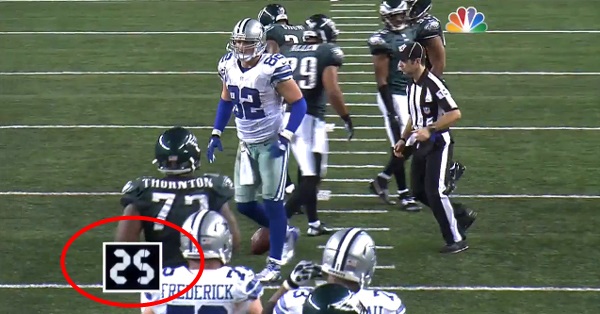 This actually happens quite frequently, but the officials almost always pick up on the miscue from the clock operator and pick up the flag. Not this time, and in a huge moment.

Now, Dallas scored on the drive anyway and lost regardless, but this was a massive blunder that would have been criticized in a big way had it affected the outcome.

Someone tell the Ravens that A.J. Green is one of the five best receivers in football.

It's 4th-and-8 with your season on the line, and you let this happen?

The stupidest example of a lack of awareness

How often do we see packs of players, or at least individuals, go ape$%#& in attempts to recovery fumbles that clearly weren't fumbles? The one damn time we get a fumble that is actually a fumble on a strange play, and nobody on either Chicago or Green Bay even makes an effort…

That might have been the difference in what was the de facto NFC North championship game.

Do Jimmy Haslem, Joe Banner, Michael Lombardi and everyone else running the Cleveland Browns really believe the team they put on the field in 2013 was any better than its 4-12 record? Did they expect more from a team that traded its 2012 No. 3 overall pick midseason, lacked a half-decent starting quarterback and was still rebuilding on both sides of the ball?

I don't understand how an organization gives up on a head coach 352 days into his tenure, but the Browns did exactly that on Sunday night, firing Rob Chudzinski after a 4-12 season. That makes little sense to me, or anyone in the football world not named Haslem, Banner or Lombardi.

In Lombardi's defense, he was named general manager after Chudzinski was hired last January. But really, that ass-backwards approach probably helped lead to this and only helps establish how stupid this entire organization is.