Grading head coach hires moments after they happen, or, in this case, before NFL teams have even reported for OTAs much less played a game is stupid.

But—what the heck—we're in the middle of the only legitimate "dead" period on the NFL calendar.

I'll take a stab at grading the fits of the seven new head coaches now and we can file this column away until 2017 to see how I did or if I was even close to getting anything right.

It's funny how teams almost always execute the "Opposite Principle" when hiring a new coach. That's not a real term, but it's one I conjured up to explain how organizations love to bring in the "opposite" of the guy they just fired.

Did your fiery, constantly screaming head coach failed? Get a calm, tranquil guy who doesn't say too much. Or vice versa.

Your failed head coach was an offensive mind?  Get a defensive specialist. Or vice versa.

First things first—it's worth noting that the Lovie Smith hire falls under Option No. 1 of the "Opposite Principle."

Smith has ties to the Buccaneers organization—he worked as Tony Dungy's linebackers coach from 1996 to 2000. He's a 4-3, "Tampa 2" disciple, which suits Tampa Bay's personnel.

Gerald McCoy is, arguably, the best 4-3 defensive tackle in the NFL, and Lavonte David has quickly become the most impactful 4-3 weakside linebacker in football.

The "zone-heavy" scheme isn't necessarily the most exquisite fit for press man stud Darrelle Revis, but Smith's made it know that he's not going to pigeonhole the handsomely paid and exceptionally talented corner.

As far as offense, well, Jeff Tedford seems to have a pretty solid reputation. He coached Trent Dilfer and David Carr at Fresno State, Akili Smith and Joey Harrington at Oregon and Kyle Boller and, most famously, Aaron Rodgers at California.

Four of those six first-round quarterbacks were flat out busts, one was medicore and one is the finest quarterback in the NFL. So what does that mixed bag of results mean? I'm not so sure, really.

I'm guessing Tedford knows offense, knows the passing game and will have his hand in either the development of Mike Glennon or the selection of a quarterback early in the 2014  draft. Will he groom the next Akili Smith, Trent Dilfer or Aaron Rodgers?

With what should be a sound defense and an offense that has an experienced play-caller calling the shots, the Buccaneers made out well with their swift hiring of Lovie Smith.

That seems to be the general consensus about Mike Zimmer, someone who's been very successful as the Cincinnati Bengals defensive coordinator since 2008.

He yells a lot and has that old-school, in-your-face football coach vibe—basically, the opposite of Leslie Frazier. Imagine that. He'll mainly run a 4-3 with the Vikings, a system that's ideal for the personnel. One of his first orders of business will be to tap into 2013 first-round pick Sharrif Floyd's potential at defensive tackle like he did with Geno Atkins, because Minnesota's defense is in the midst of a rebuilding process.

Norv Turner will run the offense, which is encouraging, although the success of that unit will ultimately hinge on the quarterback GM Rick Spielman decides to select in the 2014 draft.

Then again, Turner did a tremendous job with Philip Rivers earlier this millennium, so the Vikings should feel good about their chances to improve offensively.

In a division with Aaron Rodgers, Jordy Nelson, Jay Cutler, Brandon Marshall, Alshon Jeffery, Matthew Stafford and Calvin Johnson, you better play some defense…or you better score like 35 a game.

The Vikings made a strong, Opposite Principle  hire in Mike Zimmer and grabbed a veteran offensive coordinator who should be able to inject some life into that side of the ball.

I just think noticeable "progress" will take a while.

The prevailing analysis regarding the Cincinnati Bengals centers around their abundance of talent and how they underachieved with quarterback Andy Dalton.

How much of the disappointment was caused by offensive coordinator Jay Gruden? How much was caused by Dalton? Did the Washington Redskins just hire him because of his last name?

Remember that column I wrote about how we tend to evaluate the quality of play-calling solely based on on-field execution? You don't? That's fine, here's the link.

Sure, Daniel Snyder isn't necessarily known for his hiring abilities, but the Redskins front office must have seen a lot they liked with Gruden despite the play of Dalton.

Actually, I think Gruden was smart to incorporate plenty of easy reads and short passes over the past three seasons for his shaky quarterback. If Robert Griffin III's healthy, the Redskins probably won't look as "idiotic" as everyone thinks for hiring Jon Gruden's brother.

But is Jay Gruden a brilliant offensive coordinator who's bound to become the next Sean Payton? Probably not.

Lastly, the fact that Jim Haslett stayed on as defensive coordinator didn't make much sense to me, but I guess he was able to point to a myriad of injuries and bad drafting for his continually porous units?

A lot of people loved this hire. I'm not one of those people.

If I'm the Houston Texans, I'm hanging my hat on the fact that Bill O'Brien worked closely with Tom Brady and the New England Patriots during some of their most productive offensive seasons to date.

That's promising and makes for a sound reason to hire him.

But all the Penn State stuff has been overblown.

I just don't think he did as tremendous of a job as many think he did. Sure, the PR fiasco after the Jerry Sandusky saga and Joe Paterno's death didn't make PSU an ideal landing spot for anyone.

Also, the past failures of Bill Belichick's disciples kind of scares me a little. O'Brien might be a stand-up guy with desired leadership qualities and a firm grasp of the Patriots offense.

But is he someone to orchestrate a mini-rebuild?

Then again, if the Texans draft the right quarterback, O'Brien will probably be all right.

He brought in Romeo Crennel, one of those "he's a great coordinator but a horrible head coach" to coordinate a defense that needs major work outside of J.J. Watt, and, if healthy, Brian Cushing.

One of my problems with people, media, fans, commenters—whoever—bashing a GM, coach or player is that, usually, said "basher" doesn't have a better replacement in mind.

Thinking of it that way, I totally understand how and why Houston hired O'Brien. He had NFL coaching experience and he was fresh off a "rebuilding effort" with the Nittany Lions. That's fine. I just don't think the job he did was "incredible."

A little over a year ago, Ken Whisenhunt was the coach no one wanted. He landed in San Diego with new head coach Mike McCoy, and Philip Rivers experienced the most efficient season of his NFL career. All of sudden, he was a hot name again.

Whisenhunt was a bright offensive mind with the Pittsburgh Steelers, then he became a burgeoning head coach in Arizona with the Cardinals who revitalized the career of an elderly Kurt Warner and went to a Super Bowl with Larry Fitzgerald and Anquan Boldin. After that, the quarterback situation went in the gutter, and his team plummeted to the cellar of the NFC West.

After the work with Rivers, his offensive intelligence was recognized again.

The NFL is so fickle.

I believe in Whisenhunt. I think he knows offense and can work to develop (most) quarterbacks. The Kevin Kolb deal just fell flat on its face because Kolb is absolutely atrocious under pressure and, unfortunately, dealt with a myriad of injuries.

Will Whisenhunt save Jake Locker's career or just draft a quarterback this May?

Ray Horton was brought in as the defensive coordinator, and although I think he's a bit overrated because of the Pittsburgh Steelers / Dick Lebeau connection, his blitz-heavy style is trendy in the today's NFL and has proven to work well. Let's just hope he implements a fair share of 4-3, because Tennessee's personnel isn't exactly tailored for 3-4 looks.

Overall, a sound hire by the Titans.

This hire exemplifies the "play-calling quality depends on on-field execution" theory. After a stunningly efficient playoff run en route to a Super Bowl victory with the "average" Joe Flacco, Jim Caldwell was lauded as a quarterback whisper and a fantastic offensive coordinator.

Flacco regressed, the run game was beyond pedestrian and, welp, Jim Caldwell was dubbed a "bad play-caller."

Most Detroit Lions fans weren't happy with the hire (note the Opposite Principle), but it wasn't like the incredibly talented duo of Matthew Stafford and Calvin Johnson yielded amazing results under the previous coaching regime.

With those two and Reggie Bush, the Lions offense should be in good hands with Caldwell.

I'm not going to pretend I know a ton about defensive coordinator Teryl Austin, but he spent the past three seasons in Baltimore with Caldwell, so the continuity aspect is there. 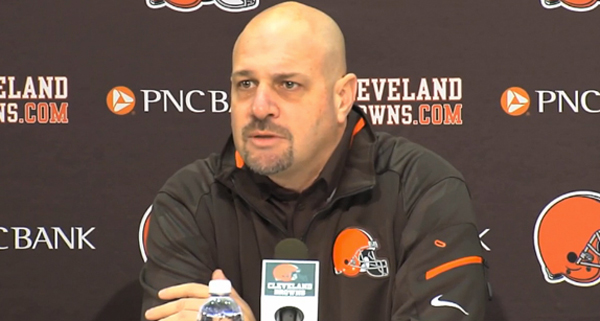 I'll get right to the point there—for "waiting" as long as they did, Jimmy Haslam, Joe Banner and Michael Lombardi are lucky to have landed Mike Pettine. The guy's only been "on his own" for one season, but the bottom line is that the "Rex Ryan" defense is a time-tested success. It pressures the hell out of quarterbacks and is usually pretty stout against the run. You know how every defensive coordinator says "our defense is going to be aggressive" when they're hired? Well, yeah, Pettine's not exaggerating or throwing out a cliche. He's dead serious.

Now, the Browns defense wasn't that good under Horton last year, but it was good enough to make the playoffs. The offense was remarkably inconsistent and much of that had came after Brian Hoyer's ACL tear.

I would have rather had Cleveland look for an offensive guy but—duh—the Opposite Principle must be adhered to in the NFL.

What's sad about what transpired with the Browns is their current situation is legitimately a head coach's dream.

Joe Thomas, T.J. Ward, Alex Mack, Josh Gordon and Joe Haden were first- or-second-team All Pros in 2013, and Cleveland has more than $45 million in cap room heading into this offseason.

Did I mention the Browns have two first-round picks? Oh, and two third-round picks and two fourth-round picks.

Lastly, what are the chances Cleveland fires its head coach after one season in consecutive years following the widespread criticism they took when they fired Rob Chudzinski?

Again, though, the only thing I don't like about the Pettine hire is that he's so entrenched with defense, but the Browns need significant offensive upgrades and a coach to develop the right quarterback. Can Kyle Shanahan be that guy? As has been the general theme here—a year ago, Shanahan was a genius after Robert Griffin III's Rookie of the Year campaign.

Now, he's a horrible play-caller who just got NFL jobs because of his dad. Come on.

The draft will be vital for Pettine and Co. but in late January, the former right-hand man of Rex Ryan's was a marvelous get.