You ask the average NFL who the best receiver in the NFL is and many would still likely say Calvin “Megatron” Johnson. Anyone giving that answer wouldn’t be up to date on the present. Over the last 12 months plus it’s become clear that no one is more dominant than Julio Jones of the Atlanta Falcons and Antonio Brown of the Pittsburgh Steelers. And while there are other elite receivers and Megatron still belongs in the upper tier discussion, Jones and Brown have separated themselves as the best two in the league. But which one deserves to be called the league’s current best pass catcher?

Looking at 2014, both had monster seasons. Brown lead the league in catches by an appreciable distance (129 to Jones’s 104 which was third best). Jones averaged 15.3 per catch to Brown’s 13.2, which made them must closer in yardage (1,698 to 1,593 in favor of Brown). Despite being much bigger in size which would in theory make him a more viable red zone threat, though, Jones’s 6 touchdowns were dwarfed by Brown’s 13. Brown’s 129 catches in 2014 were second in NFL history only to Marvin Harrison who caught 143 balls in 2002. Brown’s yardage was sixth best in NFL history. Per Pro Football Focus, Brown also rated as the best receiver in the NFL in 2014 with a +23.4 grade, whereas Jones finished sixth with +17.0. So when you put those two up against each other in 2014, there’s no shame in saying Brown was a bit better. After all, he did put together one of the very best seasons for a receiver in the history of the league. 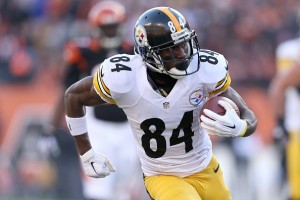 Fast forward to this year through three games and it’s Jones that has a bit of a lead on Brown. His Falcons are 3-0 thanks in large part to his tremendous and historical offensive output. Jones leads the league in catches (34), yards (440) and his 4 touchdowns are tied for second in the league behind Larry Fitzgerald. So far Jones is dominating this 3 game season like no one else can. Brown isn’t far behind, though. He’s tied for third in catches (29), second in yards (436), this time he’s the one doing more damage per catch (15.0 per reception vs. 12.9 for Jones) and he has 2 scores. PFF rates Jones as the best receiver in the NFL through 3 games (+13.4) and Brown as second (+11.9). The pace Jones is on seems entirely unsustainable. He’d be looking at 181 catches, 2,347 yards and 21 touchdowns. And certainly if he were able to continue this streak he’s one we would have to say without question he is the golden standard not only now but perhaps all time. But three games does not make a season and the sample size is small. For what it’s worth, Brown is on pace for 155 catches, 2,325 yards and almost 11 touchdowns. 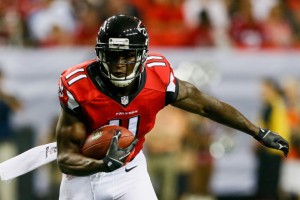 Without question these two players are performing at a level we’ve almost never seen before and they are re-defining the limitations on what a player can accomplish in a season. I think if you looked at 2014 vs. 2015 in isolation, you could argue that Jones is off to a faster start right now but Brown was better last season. Brown just lost his starting quarterback Ben Roethlisberger for an extended period which may force the Steelers to lean more heavily on star running back Le’Veon Bell. This could help Jones separate from Brown statistically as the season continues. This assumes of course the health of not only Matt Ryan, Jones’s quarterback, but Jones himself. If there’s a knock on Jones it’s that he is susceptible to injury. He missed 3 games in 2011, 11 in 2013 and one last season. Brown, by comparison, has missed 3 games in the last five seasons combined. From a durability perspective it seems that Brown would be the safer bet long term.

So pick your poison, both receivers are awesome, and right now they’re clearly the best the league has to offer. Which one would you pick?