First and foremost, you go to college to get an education. If you play sports, you’re still there for getting an education.

That is the priority.

But as a member of a collegiate sports team, you also have the chance to play for a championship, bowl game and/or individual awards depending on the sport.

The last time the UConn Huskies football team went to a bowl game was the 2011 Fiesta Bowl where they lost to Oklahoma. Since then, the UConn hasn’t had a winning record.

Under head coach Bob Diaco, the UConn football team has improved ten-fold and is on the cusp of becoming bowl eligible as they sit at 4-5. It won’t be easy though as two of the final three opponents are against teams ranked in the top 25 of the College Football Playoff poll (Houston and Temple).

A win this weekend over Tulane would get the UConn football team one win way.

After the game last week, Graham Stewart talked about the possibility of getting there as did Tommy Myers after this week’s press conference.

UConn women’s basketball head coach Geno Auriemma along with All-Americans Breanna Stewart and Moriah Jefferson talk about the challenges of winning four championships in a row.

Everyone is bound to struggle when they are freshman. Just ask UConn Huskies women’s basketball All-American Breanna Stewart that.

She struggled at times as a freshman and that’s too be expected. So what would she say to freshman Katie Lou Samuelson who struggled in the UConn women’s basketball exhibition opener on Monday night against Lubbock Christian.

Watch and/or listen below as Stewart offers Samuelson and the other freshman some advice.

UConn Huskies women’s basketball coach Geno Auriemma was at ESPN on Tuesday and stopped by the First Take Set to talk with UConn alum and host Molly Qerim, Skip Bayless and Stephen A. Smith.

Exhibition game or not, it was the first time for Katie Lou Samuelson to don the UConn Huskies women’s basketball uniform in a game on Monday night against Lubbock Christian. So you definitely would expect there to be some nerves.

The nerves didn’t help her shooting as she started the game 0-for-7. Her first three-pointer went down in the third quarter and she would go on to finish with eight points.

Even with the nerves, she never gave up on shooting and continued to work hard throughout the game.

After the game, Samuelson along with her head coach Geno Auriemma talked about her nerves and struggles from the floor.

University of Connecticut freshman Max Letunov (Moscow, Russia) has been named the Hockey Commissioners Association National Rookie of the Month for October […]

If you didn’t like UConn Huskies women’s basketball coach Geno Auriemma before watching this, you might after. This is just another case of Geno being Geno with even more humor.

The UConn Huskies women’s soccer team advanced to the semifinals of the 2015 American Athletic Conference Women’s Soccer Tournament with a 3-1 win over the ECU Pirates on Tuesday afternoon.

The UConn women’s soccer team will take on the Cincinnati Bearcats on November 5th at 6 p.m. You can catch the game live on the American Digital Network. 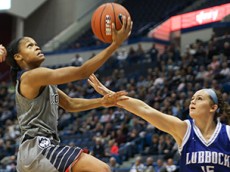 Here is a photo gallery from the Lubbock Christian Chaparrals vs UConn Huskies women’s basketball game at the XL Center in Hartford, CT on November 2, 2015 […]

It was a critical point in their game against the East Carolina Pirates. The UConn Huskies football team found themselves pinned deep in their zone after Nick Vitale muffed a point two times and Josh Marriner recovered it on their 10 yard line.

The UConn football team was leading at the time 17-6. A stop for ECU may have given them good field position.

Instead, Arkeel Newsome had other ideas as he picked up his teammate’s muffed punt with a 90-yard touchdown run on the very next play from scrimmage. The UConn Huskies football team would go on to win the game 31-13.

After the game, Newsome along with his quarterback Bryant Shirreffs talked about the run. 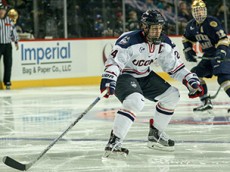 Here is a photo gallery from the men’s college hockey game between the UConn Huskies and Notre Dame Fighting Irish at the Barclays Center in Brooklyn, NY on November 1, 2015 […]